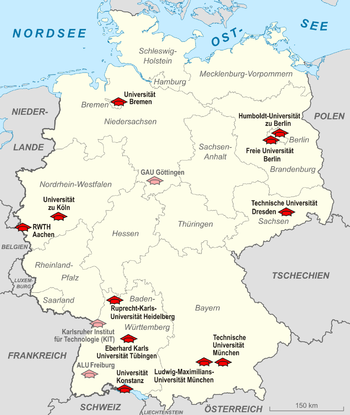 The Excellence Initiative of the German Federal Ministry of Education and Research and the German Research Foundation aims to promote cutting-edge research and to create outstanding conditions for young scholars at universities, to deepen cooperation between disciplines and institutions, to strengthen international cooperation of research, and to enhance the international appeal of excellent German universities. It is the result of lengthy negotiations between the federal government and the German states.[1]

Since almost all German universities are public (most private universities do not have the official German "Universitätsstatus"), and therefore mainly paid by taxes and generally egalitarian, there is no German Ivy League of institutions of higher education. However, the Excellence Initiative aims to strengthen some selected universities more than others in order to raise their international visibility. The initiative is conducted by the German Research Foundation (DFG) together with the German Council of Science and Humanities (WR). More than 30 universities in total received funding. It includes three lines of funding:

1st line of funding: The establishment of more than 40 research schools for young scientists and PhD candidates, which will receive one million euros each per year.

2nd line of funding: The creation of thirty so-called Clusters of Excellence, that connect universities with leading German research institutes and businesses. Annually, these clusters will receive around 6.5 million euros each to fund their work.

3rd line of funding: The selection of 11 Universities of Excellence, which will be funded highly for their "future concepts", i.e., institutional strategies to promote top-level university research.[1] Particularly this third line of funding has drawn appreciable international attention, both in academia and media.[2]

Altogether 2.7 billion euros (1.9 billion for 2007-2012) of additional funds will be distributed over the coming five years, most of this coming from the federal government. The German Council of Science and Humanities is responsible for the third line of funding, and the German Research Foundation is responsible for the first and second lines of funding. These funds are to be available in the first instance for the universities and their partner institutions until 2017.[1]

The funding for a future concept does often, but not necessarily result in a superior overall budget compared to other German universities. For example, due to its small size, the University of Constance is despite this additional means, not included in the top 20 funded universities in Germany.[citation needed]

According to the Third European Report on Science & Technology Indicators, an official document compiled by the European Commission, four of the Universities of Excellence are among Europe's top 10 universities: Technical University of Munich (joint 3rd), Freiburg (joint 6th), Karlsruhe (joint 6th), and Heidelberg (joint 9th).[5][6]

In the Academic Ranking of World Universities 2012, Technical University of Munich (53), LMU Munich (60), Heidelberg (62), and Freiburg (99) are included in the global top 100, heading the field of German universities by those criteria.[7]

Whether the Excellence Initiative has had a positive effect is currently a matter of debate. A report by the WZB Berlin Social Science Centre indicates that the program failed to create more diverse education options and produced little in the way of lasting change.[10] Additionally, the Goethe Institut claims that an additional criticism is that "competition up to now has focussed [sic] exclusively on the research rather than the teaching at universities", that prevailing qualitative imbalances in East and West German education systems may potentially be perpetuated via the program (by favoring more established Western universities over their younger Eastern counterparts), and, furthermore, that the funding may actually be insufficient to achieve the goal of creating "globally competitive universities".[11]