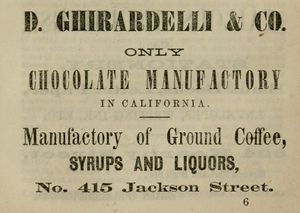 1864 advertisement from The California Miner's Almanac

In 1817, Domenico Ghirardelli was born in Rapallo, Italy, to an "exotic foods importer" and his wife. Domenico received his first education in the chocolate trade when he was apprenticed to a local candymaker as a child. By the time he was 20, Ghirardelli sailed to Uruguay with his wife to work in a chocolate and coffee business. A year later, Ghirardelli moved to Lima, Peru, and opened a confectionery store. In 1847, nine years later, James Lick (Ghirardelli's nephew) moved to San Francisco with 600 pounds of Ghirardelli's chocolate. Ghirardelli remained and continued to operate his store in Peru.[1]

The move to California

In 1849, Ghirardelli received news of the gold strike at Sutter’s Mill and sailed to California. After doing some prospecting, Ghirardelli opened a general store in Stockton, California, offering supplies and confections to fellow miners in town. Ghirardelli's tent-based store was one of the first shops set up in the area.[1]

Several months later, Ghirardelli opened a second store on the corner of Broadway and Battery in San Francisco, which became, in 1850, his first establishment in that city.[1][2]

A can of chocolate from the 20th century

A fire on May 3, 1851[3] destroyed Ghirardelli's San Francisco business, and a few days later, his Stockton store also burned down. However, in September of the same year, Ghirardelli used his remaining assets to open the Cairo Coffee House in San Francisco. This business venture proved unsuccessful, and Ghirardelli opened a new store, named "Ghirardely & Girard", on the corner of Washington and Kearny Streets in San Francisco. Soon afterward, Ghirardelli was making enough money to send for his family, who were still living in Peru. He changed the company's name to "D. Ghirardelli & Co." and, in 1852, imported 200 pounds of cocoa beans.[1] The company was incorporated in 1852 and has been in continuous operation since.[4]

The next year, in 1853, the business relocated to the corner of Jackson and Mason Streets. By 1855, a larger manufacturing facility was needed, and so the factory was moved to the corner of Greenwich and Powell Streets, while the office remained at the previous location. During this time, the company sold liquor, but dropped their line of alcoholic products sometime after 1871.[5] By 1866, the company was importing 1000 pounds of cocoa seeds a year. By that time, the company not only sold chocolate, but also coffee and spices to the United States, China, Japan, and Mexico. In 1885, the company imported 450,000 pounds of cocoa seeds.[1]

In 1892, Ghirardelli retired as head of the company and was replaced by his three sons. Two years later, on 17 January 1894 Ghirardelli died at the age of 77 in Rapallo, Italy.[1] 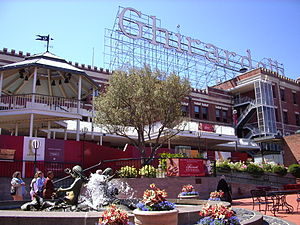 By 1900, Ghirardelli's company was selling only chocolate and mustard, having sold its coffee and spices businesses. Further expansion over the years into different buildings allowed the company to expand into new markets and grow financially. In 1965, San Francisco declared Ghirardelli Square (where many of the Ghirardelli buildings were constructed) an official city landmark. Two years later, production facilities moved to San Leandro, California.[1] 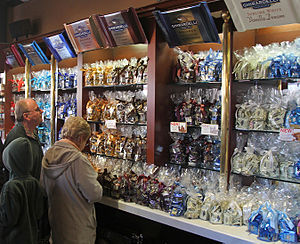 Ghirardelli is one of the few chocolate companies in the United States to control every aspect of its chocolate manufacturing process,[4] rejecting up to 40% of the cocoa seeds shipped in order to select what the company calls the "highest quality" seeds. The company then roasts the cocoa seeds in-house by removing the outer shell on the seed and roasting the inside of the seed, or the nibs.[6] The chocolate is then ground and refined until the flakes are 19 micrometers in size.

Ghirardelli produces several flavors of chocolate. The chocolate is sold in bar version or is cut up into squares and individually packaged. Chocolate varieties include: