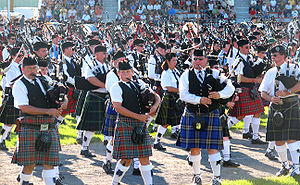 The Highland Dance are performed as ceremonial dances mainly by young female dance competitors. Historically, however, Highland dances, such as the Sword dance were performed by men over the body of a slain opponent as celebrations of victorious battles.[2]

During pipe and drum competitions, solo pipers and drummers compete in individual events for strathspey and reel, march, piorbaireachd and drumming march. Judges evaluate the synchronicity of band members and the uniformity of pitch. During the Massed Bands, over 50 pipe and drum bands play together as a single entity.[3]

The Glengarry Games were first staged in 1948, and are home to the North American Pipe Band championships. Although primarily intended to be a showcase of traditional Scottish events such as the caber toss, the games also serve as an annual gathering of area residents as well as the various clan societies across Canada and the United States.

On Saturday 31 July 2004, the MacCulloch School of Dance set a Guinness World Record for the 'Largest Massed Performance of Highland and Step Dance'. 505 dancers and two musicians performed for 5 minutes and 13 seconds in a display of Celtic dance.[4]

In honour of the 50th anniversary of the Glengarry Highland Games held annually at Maxville, Ontario, Canada Post issued 'Highland Games' on 1 August 1997. The commemorative stamp was designed by Fraser Ross, based on photographs by Andrew Balfour. The 45¢ stamps are perforated 12.5 x 13 and were printed by Canadian Bank Note Company, Limited.[5]