The Globalstar project was launched in 1991 as a joint venture of Loral Corporation and Qualcomm. On March 24, 1994, the two sponsors announced formation of Globalstar LP, a limited partnership established in the U.S., with financial participation from eight other companies, including Alcatel, AirTouch, Deutsche Aerospace, Hyundai and Vodafone. At that time, the company predicted the system would launch in 1998, based on an investment of $1.8 billion.

Globalstar received its US spectrum allocation from the FCC in January 1995, and continued to negotiate with other nations for rights to use the same radio frequencies in their countries.

The first satellites were launched in February 1998, but system deployment was delayed due to a launch failure in September 1998 that resulted in the loss of 12 satellites in a launch by the Russian Space Agency. In February 2000, it launched the last of 52 satellites—48 satellites and four in-orbit spares. Another eight unlaunched satellites were maintained as ground spares.

The first call on the original Globalstar system was placed on November 1, 1998, from Qualcomm chairman Irwin Jacobs in San Diego to Loral Space & Communications CEO and chairman Bernard Schwartz in New York.

On February 15, 2002, the predecessor company Globalstar (old Globalstar) and three of its subsidiaries filed voluntary petitions under Chapter 11 of the United States Bankruptcy Code.

Globalstar LLC was formed as a Delaware limited liability company in November 2003, and was converted into Globalstar, Inc., on March 17, 2006.

In 2011, Globalstar began laying off employees of their Canadian office to reduce costs and restructure the company.[citation needed] Between 2010 and 2011, Globalstar moved its headquarters from Silicon Valley to Covington, Louisiana in part to take advantage of the state's tax breaks and low cost of living.[1]

With over 315,000 subscribers (as of June 2008), Globalstar is the world’s largest provider of mobile satellite voice and data services.[citation needed] Globalstar offers these services to commercial and recreational users in more than 120 countries around the world.

Many land based and maritime industries make use of the various Globalstar products and services from remote areas beyond the reach of cellular and landline telephone service.

Globalstar data solutions are used for a variety of asset and personal tracking, data monitoring and "Supervisory Control and Data Acquisition" or SCADA applications. 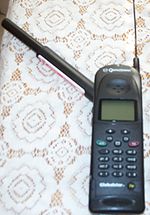 A network of ground gateway stations provides connectivity from the 40 satellites to the public switched telephone network and Internet. A satellite must have a Gateway station in view to provide service to any users it may see. Twenty Four Globalstar Gateways are located around the world, including 7 in North America.[4] Globalstar Gateways are the largest cellular base stations in the world with a design capacity for over 10,000 concurrent phone calls over a coverage area that is roughly 50% of the size of the USA. Globalstar supports CDMA technology such as the rake receiver and soft handoffs, so a handset may be talking via two spot beams to two Gateways for path diversity.

Globalstar users are assigned telephone numbers on the North American Numbering Plan in North America or the appropriate telephone numbering plan for the country that the overseas gateway is located in, except for Brazil, where the official Globalstar country code (+8818) is used. The use of gateway ground stations provides customers with localized regional phone numbers for their satellite handsets. But if there are no gateway stations to cover certain remote areas (such as areas of the South Pacific and the polar regions), service cannot be provided in these remote areas, even if the satellites may fly over them. As of May 2012, voice and full-duplex data service is currently non-functional over much of Africa, the South Asian subcontinent and most mid-ocean regions due to lack of nearby gateway earth stations.[5]

The Globalstar system uses the Qualcomm CDMA air interface; however, the Ericsson and Telit phones accept standard GSM SIM cards, while the Qualcomm GSP-1600/1700 phones do not have a SIM card interface, but use CDMA/IS-41 based authentication. Therefore, the Globalstar gateways need to support both the CDMA/IS-41 and the GSM standards.

Globalstar orbits have an inclination of 52 degrees. Therefore, Globalstar does not cover polar areas, due to the lower orbital inclination.

In 2005, some of the satellites began to reach the limit of their operational lifetime of 7.5 years. In December 2005, Globalstar began to move some of its satellites into a graveyard orbit above LEO.[8]

According to documents filed with the SEC on January 30, 2007, Globalstar's previously identified problems with its S-band amplifiers used on its satellites for two-way communications are occurring at a rate faster than expected, possibly eventually leading to reduced levels of two-way voice and duplex data service in 2008. The company's simplex data services used to support the asset tracking products as well as the SPOT Satellite Messenger are not affected by the S-band satellite issue mentioned above. Globalstar also launched eight ground spare satellites in 2007 to help reduce the impact of the issue.

In the filing, Globalstar made the following statements:

"Based on its most recent analysis, the Company now believes that, if the degradation of the S-band antenna amplifiers continues at the current rate or further accelerates, and if the Company is unsuccessful in developing additional technical solutions, the quality of two-way communications services will decline, and by some time in 2008 substantially all of the Company’s currently in-orbit satellites will cease to be able to support two-way communications services." [1]

Industry analysts speculate the problem is caused by radiation exposure the satellites receive when they pass through the South Atlantic Anomaly in their 876-mile (1414 km) altitude orbits.[9]

"The S-band antenna amplifier degradation does not affect adversely the Company’s one-way “Simplex” data transmission services, which utilize only the L-band uplink from a subscriber’s “Simplex” terminal to the satellites."[10]

"The Company is working on plans, including new products and services and pricing programs, and exploring the feasibility of accelerating procurement and launch of its second-generation satellite constellation, to attempt to reduce the effects of this problem upon its customers and operations. The Company will be able to forecast the duration of service coverage at any particular location in its service area and intends to make this information available without charge to its service providers, including its wholly owned operating subsidiaries, so that they may work with their subscribers to reduce the impact of the degradation in service quality in their respective service areas. The Company is also reviewing its business plan in light of these developments."[10]

"The Company’s liquidity remains strong. At December 31, 2006, in addition to its credit agreement, the Company had unrestricted cash on hand and undrawn amounts under the Thermo Funding Company irrevocable standby stock purchase agreement of approximately $195 million."[10]

Until the new second-generation Globalstar satellite constellation is operational, Globalstar is offering its Optimum Satellite Availability Tool (OSAT) on its Internet site, which subscribers may use to predict when one or more unaffected satellites will be overhead at any specific geographic location.

Most current users in summer 2007 report difficulty using the phones, with very short communication windows of one to two minutes and frequently dropped calls.[citation needed]

To help customers deal with the S-band communication issues, Globalstar has provided a call times tool which calculates optimum calling times for a given location.

In December 2006, Globalstar announced that Alcatel Alenia Space, now Thales Alenia Space in its Cannes headquarters, has been awarded a €661 million contract for the second-generation 32 satellite constellation.[11]

The satellites were designed with a life expectancy of 15 years, significantly longer than the design life of Globalstar’s first-generation constellation.

In addition, Globalstar announced on April 3, 2007 that it has signed a €9 million agreement with Thales Alenia Space to upgrade the Globalstar satellite constellation, including necessary hardware and software upgrades to Globalstar’s satellite control network facilities.[12]

In August 2008, Thales Alenia Space began production assembly, integration and testing of the second-generation flight model satellites, in its Rome factory, for launch as early as Q3 2009.[13]

In July 2009, Globalstar, Inc. announced that it has received complete financing for its second-generation satellite constellation and signed an amendment to the initial contract, specifying in particular the adjusted conditions for production and the new satellite delivery timetable.[14]

Predecessor Company - Globalstar LP. In February 1995, Globalstar Telecommunications Ltd. raised $200 million from its initial public offering in the NASDAQ market. The IPO price of $20 per share was equivalent to $5 per share after two stock splits. The stock price peaked at (post split) $50 per share in January 2000, but institutional investors began predicting bankruptcy as early as June 2000. The stock price eventually fell below $1 per share, and the stock was delisted by NASDAQ in June 2001.

After the IPO, the publicly traded Globalstar Telecommunications (NASDAQ symbol GSTRF) owned part of system operator Globalstar LP. From that point on, the primary financing for Globalstar LP was vendor financing from its suppliers (including Loral and Qualcomm), supplemented by junk bonds.

After a total debt and equity investment of $4.3 billion, on February 15, 2002, Globalstar Telecommunications filed for Chapter 11 bankruptcy protection, listing assets of $570 million and liabilities of $3.3 billion. The assets were later bought for $43 million by Thermo Capital Partners LLC.

Globalstar, Inc. completed an IPO in November 2006. The stock currently trades on the NASDAQ Global Select Market under the symbol GSAT.

In August 2007, Globalstar announced the introduction of the SPOT Satellite Messenger product, to be marketed through its latest subsidiary SPOT, Inc., later named SPOT LLC. The SPOT Messenger is manufactured by Globalstar partner Axonn LLC and combines the company's simplex data technology with a Nemerix GPS chipset. SPOT is intended to leverage Globalstar's still adequate L-Band uplink, which is used by simplex modems. The product was launched early November 2007.

The first five employees of Globalstar were transferred from the founding companies in 1991. Although few figures were publicly disclosed, the company apparently reached a peak of about 350 employees until layoffs in March 2001. However, this figure was misleading, as most of the development, operations and sales employees were employed by the company’s strategic partners.

Loral's chairman Bernard Schwartz served as Globalstar’s chairman and CEO until May 2001.

The company then appointed satellite telecommunications veteran Olof Lundberg to lead a turnaround at the company to serve as chairman and CEO. After beginning his career with Swedish Telecom, Lundberg had been founding Director General (later CEO) of Inmarsat from 1979 to 1995. He served as founding CEO and later CEO and Chairman ICO Global Communications from 1995 to 1999.

Lundberg resigned from the company (then in bankruptcy) on June 30, 2003.