From Infogalactic: the planetary knowledge core
(Redirected from Globe-Democrat)
Jump to: navigation, search

The St. Louis Globe-Democrat (informally referred to as The Globe) was originally a daily print newspaper based in St. Louis, Missouri, from 1852 until 1986. When the trademark registration on the name expired, it was reincarnated as an unrelated free historically themed paper.[1]

It began operations on July 1, 1852, as the Missouri Democrat, which later merged with the St. Louis Globe. It was St. Louis's conservative daily newspaper for much of its run.

Casper Yost became editor of the paper in 1889. He later was a founder of the American Society of Newspaper Editors. 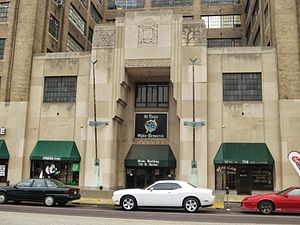 The entrance to the Globe-Democrat building in 2012.

In their earliest days, the predecessor newspapers which eventually merged to form the St. Louis Globe-Democrat were staunch advocates of freedom and anti-slavery in Missouri. The Globe-Democrat eventually became the most widely read morning paper in St. Louis, with a huge circulation, and used this base of support to promote civic responsibility and great causes regarding urban improvements. A casualty in the 1980s of an antitrust collusion agreement between the heirs of SI Newhouse (Conde Nast, owner) and the St. Louis Post Dispatch to close the Globe and enter into a 50-year profit-sharing arrangement put the Globe-Democrat out of business, leaving a record of unmatched documentary and journalistic achievement as represented in its files.

In 1968, the Globe-Democrat went to the U.S. Supreme Court to defend itself against claims that setting maximum prices for newspaper deliveries violated antitrust law. In Albrecht v. Herald Co., the majority found the paper guilty of vertical price fixing.

The Globe-Democrat Building at 710 N. Tucker Blvd. in downtown St. Louis is still used for office, datacenters, and retail space by various businesses and organizations on a rental basis. This building was built in 1931 and designed by St. Louis firm Mauran, Russell & Crowell.

Since the newspaper ceased operation, the name or variants of it have been used by groups unrelated to the original or to each other.

A free paper has been published for 15 years under the moniker of the St. Louis Globe-Democrat. This version of the St. Louis Globe-Democrat is largely a recounting of historical events, usually focused on a particular year. The paper includes some local brand-name contributors. The 25,000 circulation editions are free and supported by advertisers. The paper is circulated in entertainment venues such as movie theaters. The paper has circulated since 1994.

On December 8, 2009, an online newspaper was launched under the St. Louis Globe-Democrat name; it ceased operations on January 23, 2011. The domain was listed as "for sale" through at least October 2013.[4] By February 2014 it was operating as a historical website,[5] and by March 2014 it had a new appearance and was providing current news as well as history. Its name now appears ironic in view of its self-described political position:[6]

the conservative voice that is missing in the St. Louis region and the state of Missouri. Republican? Tea Party? Libertarian? Doesn’t matter.