The following is a list of terms specific to anarchists. Anarchism is a political and social movement which advocates voluntary association in opposition to authoritarianism and hierarchy.

A form of organic organization according to which different parts of an organization are temporarily assembled to meet the requirements of that particular point in time.[1]

A small non-hierarchical collective of activists who collaborate on direct action via consensus decision-making.[2]

Coined by Ernst Jünger, this refers to the ruler (i.e. individual) in a state of anarchy analogous to the monarch in a state of monarchy, a conception influence by Max Stirner's notion of the sovereign individual.[3]

Derived from the Ancient Greek ἀν (without) + ἄρχειν (to rule) "without archons," "without rulers".[4]

A form of anarchism which does not declare affiliation with any specify subtype of anarchism (as may be suffixed to anarcho- or anarcha-), instead positioning itself as pluralistic, tolerant of all anarchist schools of thought.[5]

A library which is not organised hierarchically and that has no catalogue. The concept is influenced by the ideas of the Situationists.

A set of radical left-wing political movements in Western Europe which emerged in the late 20th century.

A Greek word meaning "ruler"; the absence of archons and archy (rule) defines a state of anarchy. Derived from the Ancient Greek άρχων, pl. άρχοντες.

The "two red years" of political agitation, strikes and land occupation by Italian workers in 1919 and 1920.[6]

A political philosophy primarily of African-Americans, opposed to the what it sees as the oppression of people of colour by the white ruling class through the power of the state.[7]

An affinity group, or cluster of affinity groups that assembles during protests, demonstrations, or other forms of direct action. Black blocs are noted for the distinctive all-black clothing worn by members to conceal their identity and for their intentional defiance of state property law.[8][9]

A participatory decision making process for collectives that seeks the resolution or mitigation of minority objections (according to the principle of inclusivity) as well as the agreement of the majority of participants.[11][12][13]

Cost the limit of price

A maxim coined by individualist anarchist Josiah Warren (1798–1874) to express a normative conception of the labor theory of value—that is, that the price of a good or service should never exceed its cost.[14]

Abbreviation of "counter-establishment economics", a concept in agorist theory of the use and advocacy of black and grey markets and the underground economy to erode the moral authority of and the perceived necessity for the state.

Dual power is a state of affairs in which people have created institutions that fulfill all the useful functions formerly provided by the state. The creation of a general state of dual power is a necessary requirement for a successful revolution…

A private (or possibly cooperative) organization specialized in resolving disputes that would arise in an anarchical society (similar to a PDA).[16]

The concept of revolution through the creation of "counter-institutions" in place of and in opposition to state power.[15] Used in anarcho-communist discourse, it distinct from the earlier use of the phrase by non-anarchist communists such as Vladimir Lenin.

Physically searching through the discarded belongings in a dumpster or other trash receptacle, with the intention of salvaging useful material such as food or information.[17]

A theory in the philosophy of science advanced by Paul Feyerabend which holds that there are no useful and exception-free rules governing the progress of science, and that the pragmatic approach is a Dadaistic "anything goes" attitude of methodological pluralism.[18]

The practice of retrieving edible food that would otherwise go to waste and distributing it to those in need.[19]

A decentralized network in which skills, information and knowledge are shared with neither the social hierarchy nor the institutional environment of formal schooling.

An anti-consumerist lifestyle according to which participants attempt to restrict their consumption of natural resources and participation in the conventional economy to using salvaged and discarded goods.[20]

A monetary system in the Freiwirtschaft theory, according to which units of currency retain their value or lose it at a certain rate, making inflation and profiting from interest impossible. Freigeld is a German phrase with the literal meaning "free money".[21]

Second-hand stores where all goods are free. An example of a gift economy.[22]

A laboratory for experimentations with freedom of information and communication, associated with the struggle for freedom of movement.[24]

The seven anarchists tried and executed for the murder of a Chicago policeman during the Haymarket affair.[25]

A form of non-hierarchical social organization which utilises direct democracy and consensus decision-making.[26] 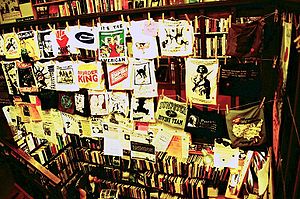 Interior of the Left Bank Books infoshop in Seattle, Washington in 2006. An infoshop is a nexus for information exchange among anarchists.

A doctrine which rejects all moral obligations and governmental law in favour of the satisfaction of one's own desires.[27] Pioneered by the Bonnot Gang in France and heavily influenced by the individualist anarchist philosophy of Max Stirner.[27]

A philosophy which demands the embracing of immediate social interactions with people as a means of countering the antisocial consequences of consumerist capitalism.[28]

A space (often a social center) that serves as a node for anarchists involved with radical movements and countercultures for trading publications (typically books, zines, stickers and posters), meeting and networking with similar individuals and groups.[29] The primary directive of an infoshop is the dissemination of information.[30] Related: zine library.

A vanguardist organisation of revolutionaries first proposed by Mikhail Bakunin.[31]

Dutch anarchists influenced by Peter Kropotkin who sought to promote awareness of alternatives to authoritarian and capitalist solutions to social problems in 1960s Amsterdam.[33]

A slogan expressing the desire of freedom from landowners originally used by the revolutionary leaders of the Mexican Revolution. Spanish: Tierra y Libertad, Russian: Земля и Воля Zemlya i Volya.

A doctrine asserting that each individual has the right to assert their fullest liberty to act so long as it does not extend them greater liberty than any other individual. Named by Herbert Spencer.

A pejorative term for a set of French laws passed during 1893–1894 restricting the freedom of the anarchist press in the aftermath of an outbreak of propaganda of the deed.

A series of political and economic concepts developed by Ukrainian anarchist revolutionary Nestor Makhno (1888–1934) and his followers, and implemented in the Free Territory. Central concepts include anarchist communism, workers' self-management and—developed during Makhno's exile in Paris, France—platformism.

American schools formed in the early 20th century based on the ideas of educator and anarchist Francesc Ferrer i Guàrdia and modelled after his Escuela Moderna.[34]

A prohibition against the initiation of force, or the threat of force, against persons or property (usually referred to as aggression or coercion). Generally used to derive the ethics of right-libertarianism and anarcho-capitalism.[36]

A term used by anarcho-capitalists to refer to a private organization which fulfills some or all of the roles associated with police or military in a statist society.

Propaganda of the deed

Main article: Propaganda of the deed

A free market based on the principle of gift economics whereby participants bring gifts and resources to share with one another, without money being exchanged.[37] Related: participatory economics, voluntary association.

Samizdat—the production of literature banned by the former communist governments of eastern Europe; the term is a play on the term for the Soviet state press, and translates to "self-publishing." Throughout the greater part of the twentieth century, the best literature, philosophy, and history in the Soviet Union and its satellite states was copied by photo-reproduction and distributed through underground channels—just as it is here in the United States today.

The creation of permanent dwellings on the ocean, analogous to homesteading on land. A seastead is a structure meant for permanent occupation on the ocean.[39] Related to Permanent Autonomous Zones.[40]

A set of customs shared by an affinity group which engages in illegal activities, the practice of which minimizes the risk of such activities.[41] Related: direct action, netwar

Acronym coined by libertarian science fiction writer Robert A. Heinlein in The Moon Is a Harsh Mistress for "There Ain't No Such Thing As A Free Lunch". Used to express scepticism towards socialist economics.[42]

The name given to a series of violent confrontations between the Spanish army and the anarchist-backed working classes in Catalunyan cities from July 25-August 2, 1909.[43]

Trial of the thirty

A show trial in 1894 in Paris, France, aimed at legitimizing the lois scélérates passed in 1893–1894 against the French anarchist movement and at restricting press freedom by proving the existence of an effective association between anarchists.[44] French: Procès des trente

The political philosophy of veganism (more specifically animal liberation) and anarchism, creating a combined praxis as a means for social revolution.

The use of or reliance on voluntary action to maintain an institution, carry out a policy, or achieve an end.[45]

A political philosophy which advocates property rights and voluntary association as the foundation of society, and generally opposes coercion and aggression. 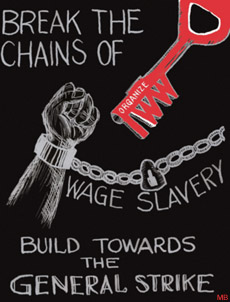 The abolition of wage slavery has been a stated goal of unions like the Industrial Workers of the World.

A term which asserts a similarity between slavery—the ownership and control of one person by another—and wage labour.[46]

A form of workplace decision-making in which the workers rather than professional managers decide on issues related to the operation of the business.[47]

Compound of zen and "archy". The social order which arises from meditation. As a doctrine, zenarchism is the belief that "universal enlightenment" is a prerequisite to the abolition of the state.[48]

A low-circulation, non-commercial periodical of original or appropriated texts and images. Usually reproduced via photocopier on a variety of colored paper stock.

A repository of zines and other associated artifacts, such as small press books. Zine libraries are typically run on a minimal budget, and have a close association with infoshops and other forms of DIY culture and independent media.