Gloucester County is largely composed of low-lying rivers and coastal plains. The highest elevation in the county is a slight rise along County Route 654 southeast of Cross Keys that reaches approximately 180 feet (55 m) above sea level;[11] the lowest point is at sea level on the Delaware River. 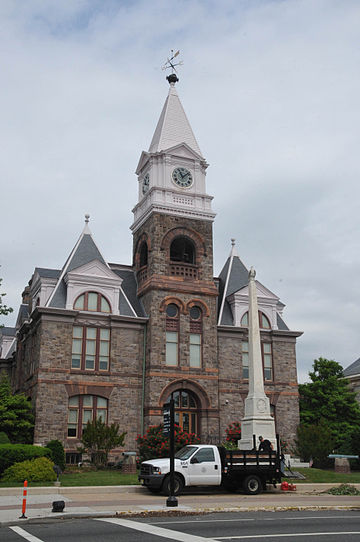 Swedesboro and Bridgeport were the among the earliest European settlements in New Jersey as a part of the 17th century New Sweden colony. Gloucester dates back to May 26, 1686, when courts were established separate from those of Burlington. It was officially formed and its boundaries defined as part of West Jersey on May 17, 1694. Portions of Gloucester County were set off on February 7, 1837, to create Atlantic County, and on March 13, 1844 to create Camden County.[12] The county was named for the city of Gloucester / county of Gloucestershire in England.[13]

Woodbury, founded in 1683 by Henry Wood, is the oldest municipality in the county.[14] National Park, another town in the county, was the site of the Revolutionary War Battle of Red Bank where Fort Mercer once stood. It is now the site of Red Bank Battlefield Park and the remains of the HMS Augusta, which sank during the battle. During the colonial era, Gloucester County's main economic activity was agriculture. Woodbury was the site of the county courthouse, the county jail, a Quaker meeting house (still in existence), and an inn (on the current location of Woodbury Crossings). Because of the county's many creeks leading to the Delaware River and the Atlantic Ocean, smuggling was very common.

The county leans toward the Democratic Party, though to a slightly lesser degree than the state of New Jersey as a whole. In the 2004 U.S. Presidential election, John Kerry carried Gloucester County by a 5.3% margin over George W. Bush, while Kerry carried the state by 6.7% over Bush.[43]

In the 2008 U.S. Presidential election, Barack Obama carried Gloucester County by a 12.2% margin over John McCain, while Obama carried the state by 15.5% over McCain.[44] However, in the 2009 Gubernatorial Election, Republican Chris Christie received 47% of the vote, defeating Democrat Jon Corzine, who received around 43%.

Interstate 295 is the only interstate in the county which also runs through the northwest for about 14 miles. The New Jersey Turnpike also passes through in the northwest. Only one turnpike interchange is located within Gloucester: Exit 2 in Woolwich.

The Glassboro–Camden Line is a proposed 18-mile (28.97 km) diesel multiple unit (DMU) light rail system planned to connect with the River LINE and PATCO Speedline in Camden and expected to be in operation in 2019.[46][47]

The Port of Paulsboro is located on the Delaware River and Mantua Creek in and around Paulsboro. Traditionally one of the nation's busiest for marine transfer operations of petroleum products, the port is being redeveloped as an adaptable omniport able to handle bulk, break bulk cargo and shipping containers. Studies completed in 2012[49][50] concluded that the port is well suited to become a center for the manufacture, assembly, and transport of wind turbines and platforms the development of wind power in New Jersey[51][52][53][54][55][56] 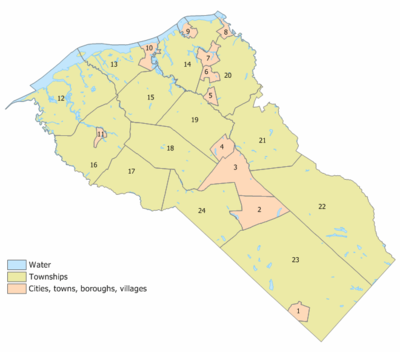 The following municipalities are located in Gloucester County. The municipality type is listed in parentheses after the name, except where the type is included as part of the name. Census-designated places and other unincorporated communities are listed under their municipalities.

Gloucester County is home to the first county based EMS agency in New Jersey providing services to the municipalities of Logan, Woolwich, Swedesboro, East Greenwich, Gibbstown, Paulsboro, West Deptford, National Park, Mantua, Pitman, Glassboro, Clayton, Woodbury, South Harrison and Wenonah. GCEMS was started in September 2007; its goal is to provide emergency medical services to the residents of the county within nine minutes from the time of dispatch 90% of the time (considered to be the gold standard in EMS). Currently GCEMS has 10 ambulances in service around the clock and two "power shift" ambulances on duty from the hours of 8AM to 9PM seven days a week. The department operates out of 11 stations spread strategically throughout the county. The Gloucester County EMS administrative offices are located at the county's Emergency Response Center at 1200 N. Delsea Drive, Clayton, New Jersey 08312.[57] It was the winner of the 2010 Outstanding Public EMS Agency by the State of New Jersey.[58] 2010 EMS Award Recipients November 12, 2010], New Jersey Statewide Conference on EMS. Accessed October 4, 2013.

Gloucester County SWAT is a multi-jurisdictional team, composed of police officers from departments within the county. Officers are on-call 24/7 for emergency situations such as barricaded subjects, suicidal subjects and hostage rescue. They also provide high-risk warrant service, dignitary protection and counter-terrorism response.[59]

Rowan University in Glassboro, is a public university that was founded in 1923 as Glassboro Normal School on a 25-acre (10 ha) site donated by the borough.[61] After a series of alternative titles over the years, in 1992 the school was renamed Rowan College of New Jersey after Henry Rowan and his wife Betty gave the school $100 million, at the time the largest gift to a public college.[62] It became Rowan University on March 21, 1997, when it won approval for university status from the New Jersey Commission on Higher Education.[63] The Cold War Glassboro Summit Conference between U.S. President Lyndon Johnson and Soviet Premier Alexei Kosygin took place from June 23–25, 1967, in Hollybush Mansion. The site was chosen because of its location equidistant between New York City, where Kosygin was making a speech at the U.N., and Washington, D.C.[64]