From Infogalactic: the planetary knowledge core
Jump to: navigation, search
For other places with the same name, see Goat Island (disambiguation).

Goat Island is a small island in Narragansett Bay and is part of the city of Newport, Rhode Island, U.S. The island is connected to the Easton's Point neighborhood via a causeway bridge. Goat Island is home to the Newport Harbor Light (1842), The Marina Cafe & Pub, Belle Mer, the Hyatt Regency Newport hotel, and the Goat Island South Condominiums. The island was home to several military forts, the U.S. Naval Torpedo Station, and was the site of the attacks on the HMS St John and HMS Liberty.

Narragansett Native Americans called the island "Nante Sinunk", and sold the island in 1658. Early Newport colonists used the island as a goat pasture.[2] An earthen fort was built on Goat Island in 1703 during the War of Spanish Succession, and it was named "Fort Anne" after the reigning Queen Anne.

On Friday, 19 July 1723, twenty-six pirates (Charles Harris, Thomas Linicar, Daniel Hyde, Stephen Mundon, Abraham Lacy, Edward Lawson, John Tomkins, Francis Laughton, John Fisgerald, William Studfield, Owen Rice, William Read, John Bright, Thomas Hazel, William Blades (Rhode Island), Thomas Hagget, Peter Cues, William Jones, Edward Eaton, John Brown, James Sprinkly, Joseph Sound, Charles Church, John Waters, Thomas Powell (Connecticut), and Joseph Libbey) who had been hanged at nearby Bull's Point (Gravelly Point) after being tried in Newport between 10 and 12 July, were buried on the north end of Goat Island, on the shore, between high and low water mark.[2] "The pirates were all young men, most of them natives of England" (Olden Times Series 5). The following is taken from The Salem Observer, November 11, 1843: "...this was the most extensive execution of pirates that ever took place at one time in the Colonies, it was attended by a vast multitude from every part of New England." (also reference Gutenberg Library, The Olden Times Series, Volume 5, by Henry M. Brooks.)

In 1738 a stone fort was built and renamed "Fort George" after King George II.[3] In 1764 Newporters took over Fort George and fired shots at HMS St. John a British ship with a crew that had allegedly stolen from local merchants.[4] In 1769 Rhode Islanders burned the HMS Liberty, a customs ship, when it drifted to the north end of Goat Island (near where the pirates were buried) in another early act of rebellion against British rule.

In 1775 the Fort was renamed Fort Liberty. The British army occupied Newport from 1776 through 1779 and renamed the fort Fort George during that time.

In 1784 it was repaired and renamed Fort Washington after George Washington. In 1794, Newport sold Goat Island to the federal government for $1,500 to maintain a military fort to defend Newport Harbor. The fort was named Fort Wolcott in commemoration the services of Oliver Wolcott who was a General of the Militia and a member of the Continental Congress from Connecticut. In 1824, the first Newport Harbor Lighthouse was constructed at the north end of the island. Fort Wolcott was active until 1835 when the garrison was transferred to Florida to fight the Seminole Indians. 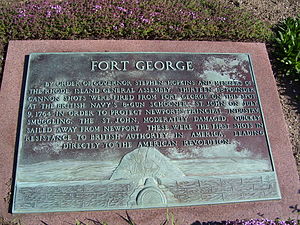 In 1869 the U.S. Naval Torpedo Station was founded on Goat Island, on the site of the former Army fort. The Station was greatly expanded over the next 100 years and produced many of the Navy's torpedoes through World War I and World War II at the island's Navy Torpedo Factory. The torpedo station was closed in 1951 and Naval Undersea Warfare Center was created with a facility nearby.

In the 1960s, Goat Island was sold to a private developer Globe Manufacturing. Over the next several decades, Globe constructed the Colonial Hilton Hotel (later known as the Sheraton Islander Inn, Doubletee Hotel and now the Hyatt Hotel) and Goat Island South Condominiums and converted the only former navy building remaining on the island into the Goat Island Marina and Marina Bar & Grille. In the 1990s IDC, Island Development Corp. constructed the "Regatta Club", an event venue. After two Rhode Island Supreme Court decisions, regarding the development, Goat Island South Condominiums took possession of the "Regatta Club" leasing it to a third party.[5] In 2006, Longwood Venues and Destinations opened Belle Mer, an event space for private functions, spanning 7.5 acres.