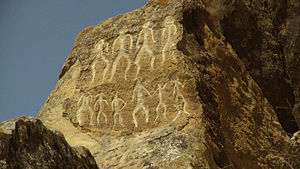 Petroglyphs in Gobustan, Azerbaijan, dating back to 10,000 BC indicating a thriving culture.

Gobustan National Park (Azerbaijani: Qobustan Milli Parkı) officially Gobustan Rock Art Cultural Landscape is a hill and mountain site occupying the southeast end of the Greater Caucasus mountain ridge in Azerbaijan, mainly in the basin of Jeyrankechmaz River, between the rivers Pirsagat and Sumgait. It is located west of the settlement of Gobustan, about 40 miles (64 km) southwest of the centre of Baku on the west bank of the Caspian Sea.

The territory of Gobustan is cut up with numerous, sometimes rather deep ravines (in Azerbaijani: gobu). That is a suggested origin of the Gobustan geographical name.

In 1966 Gobustan was declared a national historical landmark of Azerbaijan in an attempt to preserve the ancient carvings, relics, mud volcanoes and gas-stones in the region. The mountains Boyukdash, Kichikdash, Jingirdag, and the Yazili hill were taken under legal government protection. These mountains are located near the Caspian Sea, in the southeast part of Gobustan. 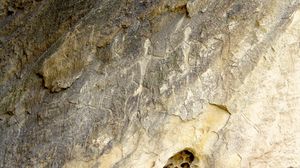 In 2007 Gobustan was declared a UNESCO World Heritage Site considered to be of "outstanding universal value" for the quality and density of its rock art engravings, for the substantial evidence the collection of rock art images presents for hunting, fauna, flora and lifestyles in pre-historic times and for the cultural continuity between prehistoric and medieval times that the site reflects.[1] 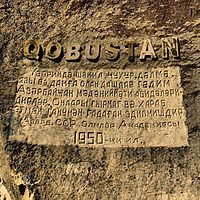 Throughout many centuries under impact of the sun, wind, seismic activity and various atmospheric precipitation, blocks of stones broke away from the edges of a vast limestone layer and rolled down the slopes. Here, in the area displaying the fantastic scene of destruction, the huge blocks of stones and rocks chaotically pressed against each other, forming about 20 big and small caves and the canopies serving as a natural shelter to the inhabitants.

The archeological value of Gobustan was discovered when a group of men went in to mine for gravel in 1930. While the zone is abundant in boulders and stone formations, one mine employee noticed the sacred carvings on the rocks. They also discovered man-made caves wherein more of the drawings can be found.

Gobustan is very rich in archaeological monuments. The reserve has more than 6,000 rock engravings dating back between 5,000 - 40,000 years. The site also features the remains of inhabited caves, settlements and burials, all reflecting an intensive human use by the inhabitants of the area during the wet period that followed the last Ice Age, from the Upper Paleolithic to the Middle Ages. The site, which covers an area of 537 ha, is part of the larger protected Gobustan Reservation.[2]

Most of the rock engravings depict primitive men, animals, battle-pieces, ritual dances, bullfights, boats with armed oarsmen, warriors with lances in their hands, camel caravans, pictures of sun and stars.[3][4]

The petroglyphs and rock engravings are an exceptional testimony to a way of life that has disappeared, graphic representations of activities connected with hunting and fishing at a time when the climate and vegetation of the area were warmer and wetter than today.

Iskhag Jafarzadeh who was one of the pioneers of Azerbaijan archaeology and ethnography, excavated over seventy artifacts on Azerbaijan's territory and studied the Gobustan rock paintings.[5] In 1948 during the Gobustan expedition, he discovered the Latin rock inscription near mountain Boyukdash, some 70 km far from Baku, which is the easternmost Roman evidence to be known.[6]

Petroglyphs from Gobustan are depicted on the reverse of the Azerbaijani 5 manat banknote issued since 2006.[7] As of 2011, The Petroglyph Museum functions in the park. 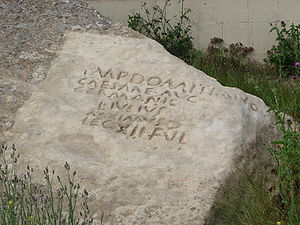 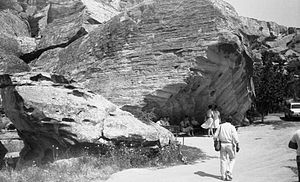 Rock formations and caves in Gobustan in 1987.

The climate of Gobustan is a dry semi subtropical one, with rather mild winters and very hot dry summers. An atmospheric precipitation is small and so are the springs of Big Caucasus area.

The presence of rare and wild flora testifies that the climate of Gobustan some tens of thousands of years ago was damper, and the atmospheric precipitation was sufficient, so springs were abounding with water.

In the remote past, the flora and fauna of Gobustan were incomparably richer. Its landscape represented a kind of savannah with corresponding climate. Here were large herds of wild bulls, goats, deer, wild horses, donkeys, wild boars, and gazelles hunted by lions, wolves, wild cats and leopards.

The vegetative world of Gobustan has a character that is common for deserts and semi-deserts. It consists of ephemeris grasses and bushes, wormwood and similar long-term plants. Among heaps of stones and rocks a wild rose, a dwarfish cherry, Hibernian honeysuckle, a juniper, wild pear, wild fig, wild pomegranate, grapes and some other kinds of trees and bushes are rather often met decorating the stern landscape.

The fauna of Gobustan has strongly grown poor for the last decades of years. The natural inhabitants of Gobustan now are rare foxes, jackals, wolves, hares and wild cats, mountain chickens, wild pigeons, larks along with numerous snakes and lizards and some others. 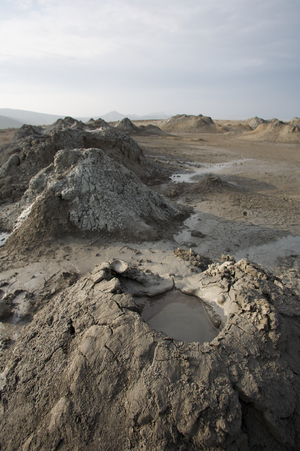 A series of mud volcanos in Gobustan, Azerbaijan.

Azerbaijan and its Caspian coastline are home to nearly 400 mud volcanoes, more than half the total throughout the world. In 2001, one mud volcano 15 kilometers from Baku made world headlines when it suddenly started ejecting flames 15 meters high.[8]

Many geologists as well as locals and international mud tourists trek to such places as the Firuz Crater, Gobustan, Salyan and end up happily covered in mud which is thought to have medicinal qualities.

On the average, every twenty years or so, a mud volcano may explode with great force in Gobustan, shooting flames hundreds of metres into the sky, and depositing tonnes of mud on the surrounding area.

The appearance of the Zoroastrian religion in Azerbaijan almost 2,000 years ago is closely connected with these geological phenomena, and Azerbaijan's etymology - Land of the Eternal Fire derives from its Zoroastrian history.

Apart from petroglyphs, there is also this musical gemstone known as Gaval Dash. It makes a tambourine-like sound when it is hit in different points.[9] Among the stone books there are a big flat stone formed out of 3 supports. Suffice it to touch the object with a small stone, musical sounds come from it. The Gaval Dash have been formed due the combination of unique climate, oil and gas which can be found in the region of Azerbaijan.[10]

The Gaval Dash can only be found in Gobustan, Azerbaijan.[11]