His name is immortalised in the Hounsfield scale, a quantitative measure of radiodensity used in evaluating CT scans. The scale is defined in Hounsfield units (symbol HU), running from air at −1000 HU, through water at 0 HU, and up to dense cortical bone at +1000 HU [12] and more.

Hounsfield was born in Sutton-on-Trent (near Newark-on-Trent), Nottinghamshire, England on 28 August 1919. He was the youngest of five children (two brothers, two sisters). As a child he was fascinated by the electrical gadgets and machinery found all over his parents' farm. Between the ages of eleven and eighteen, he tinkered with his own electrical recording machines, launched himself off haystacks with his own home-made glider, and almost killed himself by using water filled tar barrels and acetylene to see how high they could be waterjet propelled. He attended the Magnus Grammar School (now Magnus Church of England School) in Newark-on-Trent and excelled in physics and arithmetic.

In 1949, Hounsfield began work at EMI, Ltd. in Hayes, Middlesex, where he researched guided weapon systems and radar. Hounsfield incorrectly gave this date as 1951 when he wrote his autobiography which is available on the Nobel Prize website. The correct date is 10 October 1949 as stated in a biography of Hounsfield.[13] At EMI, he became interested in computers and in 1958, he helped design the first commercially available all-transistor computer made in Great Britain: the EMIDEC 1100. Shortly afterwards, he began work on the CT scanner at EMI. He continued to improve CT scanning, introducing a whole-body scanner in 1975, and was senior researcher (and after his retirement in 1984, consultant) to the laboratories.

Invention of the CT scanner 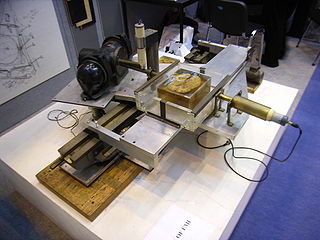 While on an outing in the country, Hounsfield came up with the idea that one could determine what was inside a box by taking X-ray readings at all angles around the object.

He then set to work constructing a computer that could take input from X-rays at various angles to create an image of the object in "slices". Applying this idea to the medical field led him to propose what is now known as computed tomography. At the time, Hounsfield was not aware of the work that Cormack had done on the theoretical mathematics for such a device. Hounsfield built a prototype head scanner and tested it first on a preserved human brain, then on a fresh cow brain from a butcher shop, and later on himself. On 1 October 1971, CT scanning was introduced into medical practice with a successful scan on a cerebral cyst patient at Atkinson Morley Hospital in Wimbledon, London, United Kingdom.[14] In 1975, Hounsfield built a whole-body scanner.

In 1979, Hounsfield and Cormack received the Nobel Prize in Physiology or Medicine.

Hounsfield received numerous awards in addition to the Nobel Prize. He was appointed Commander of the British Empire in 1976 and knighted in 1981.

He never married[citation needed] and died in 2004.