From Infogalactic: the planetary knowledge core
(Redirected from Gorontalo (province))
Jump to: navigation, search
For other uses, see Gorontalo (disambiguation). 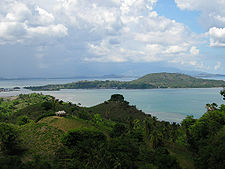 Gorontalo (Indonesian: Gorontalo) is a province of Indonesia. It is located in the northern tip of the island of Sulawesi on the Minahassa Peninsula. The province's population was 1,040,164 at the 2010 census, and the latest estimate (for January 2014) is 1,134,498; its capital is the city of Gorontalo.

The province was established in December 2000 being split off from the province of North Sulawesi.[2]

There are several hypothesis about the etymology of the name Gorontalo.:[3]

Gorontalo lies on the northern Sulawesi arm, known as the Minahasa Peninsula. The province has an elongated shape area, stretching from west to east almost horizontally on a map, with total area of 11,257.07 km2 (4,346.38 sq mi).[4] To the north and the south of the province are the Sulawesi Sea and the Gulf of Gorontalo or known as Gulf of Tomini, respectively. Prior to 2000, Gorontalo province was part of North Sulawesi province which lies on the eastern border.[2] The western border of the province is Central Sulawesi province.

Topography of the province is relatively low (0—40o), with the elevation ranging between 0—2,400 m (7,900 ft) above sea level. Its coastline length is more than 590 km (370 mi). Counting the Exclusive Economic Zone to the north where Philippines is at the border, the total sea area of the province is more than 50,500 km2 (19,500 sq mi).[4] There are some small islands around the north and the south of the province, 67 of which have been identified and named.[4]

In 1525, with Portuguese assistance, three small rock forts were built overlooking the waters of Lake Limboto. Still in place today, the Fort Otonaha complex has commanding views. The Spanish also entered the area in limited numbers via the Philippines during the mid-16th century. They introduced corn, tomatoes, chili peppers, horses, and the afternoon siesta to Gorontalo, all of which are an integral part of life there today.[citation needed] The Dutch under the aegis of the Dutch East India Company (VOC) worked to wrest control of the lucrative spice trade away from the Sultanate of Ternate and push out all other European competitors. Gradually, the Dutch gained political control and ended the power of the local kings. 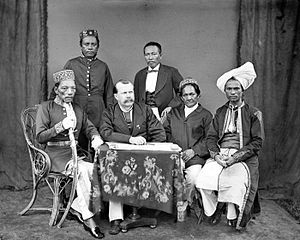 The people of Gorontalo achieved independence from Dutch rule in 1942. This was partly through the efforts of the guerrilla/freedom fighter and local hero Nani Wartabone, who forced out the occupying Japanese during World War II. Since the city escaped Allied bombing during the war, a number of Dutch-era buildings are still standing. Although many are in poor condition, Gorontalo City has a distinctive colonial appearance. 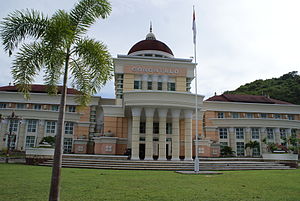 Note: * A city and also the provincial capital.

Tourist sites in the province include:[6]

The islands of Pepaya, Mas and Raja islands, located in the Sumalata Waters in North Gorontalo, have been named a nature reserve since the Dutch colonial time in 1936. Four of the only seven species of turtles can be found in the islands, the world's best turtle habitat. They include Penyu Hijau (Chelonia midas), Penyu Sisik (Eretmochelys imbricata), Penyu Tempayan (Caretta caretta) and Penyu Belimbing (Dermochelys coriacea). In 2011, the habitat was threatened by human activities such as illegal poaching and fish bombing activities; furthermore a lot of coral reefs, which represent a source of food for turtles, have been damaged.[7]

Limboto Lake has 40 bird species, 14 of them are migrating birds before resuming their journey which can be found in September and October every year from Europe, Russia, Alaska and Siberia to various destinations.[8]