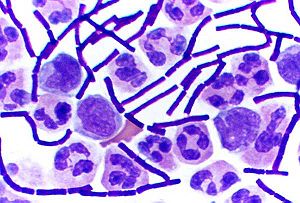 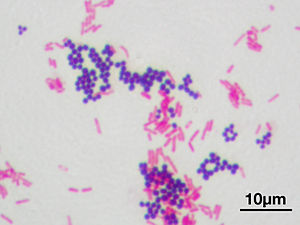 Gram-positive bacteria are bacteria that give a positive result in the Gram stain test. Gram-positive bacteria take up the crystal violet stain used in the test, and then appear to be purple-coloured when seen through a microscope. This is because the thick peptidoglycan layer in the bacterial cell wall retains the stain after it is washed away from the rest of the sample, in the decolorization stage of the test.

Gram-negative bacteria cannot retain the violet stain after the decolorization step; alcohol used in this stage degrades the outer membrane of gram-negative cells making the cell wall more porous and incapable of retaining the crystal violet stain. Their peptidoglycan layer is much thinner and sandwiched between an inner cell membrane and a bacterial outer membrane, causing them to take up the counterstain (safranin or fuchsine) and appear red or pink.

Despite their thicker peptidoglycan layer, gram-positive bacteria are more receptive to antibiotics than gram-negative, due to the absence of the outer membrane. 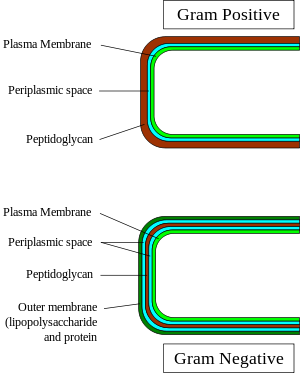 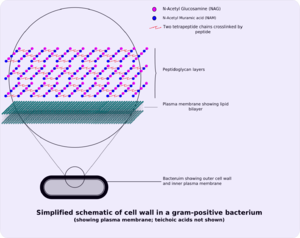 In general, the following characteristics are present in gram-positive bacteria:[1]

Only some species have a capsule usually consisting of polysaccharides. Also only some species are flagellates, and when they do have flagella they only have two basal body rings to support them (gram-negative have four). Both gram-positive and gram-negative bacteria commonly have a surface layer called an S-layer. In gram-positive bacteria, the S-layer is attached to the peptidoglycan layer (in gram-negative bacteria, the S-layer is attached directly to the outer membrane). Specific to gram-positive bacteria is the presence of teichoic acids in the cell wall. Some of these are lipoteichoic acids, which have a lipid component in the cell membrane that can assist in anchoring the peptidoglycan.[2]

Along with cell shape, Gram staining is a rapid method used to differentiate bacterial species. In traditional and even some areas of contemporary microbiological practice, such staining, alongside growth requirement and antibiotic susceptibility testing, and other macroscopic and physiologic tests, forms the full basis for classification and subdivision of the bacteria (e.g., see figure and pre-1990 versions of Bergey's Manual). 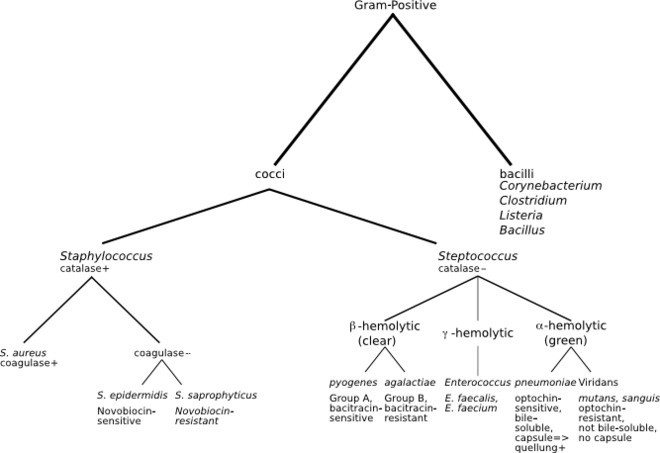 Importance of the outer cell membrane in bacterial classification 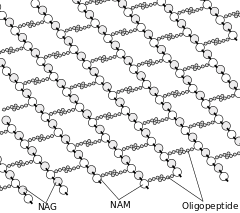 The structure of peptidoglycan, composed of N-acetylglucosamine and N-acetylmuramic acid

Although bacteria are traditionally divided into two main groups, gram-positive and gram-negative, based on their Gram stain retention property, this classification system is ambiguous as it refers to three distinct aspects (staining result, envelope organization, taxonomic group), which do not necessarily coalesce for some bacterial species.[5][6][7][8] The gram-positive and gram-negative staining response is also not a reliable characteristic as these two kinds of bacteria do not form phylogenetic coherent groups.[5] However, although Gram staining response is an empirical criterion, its basis lies in the marked differences in the ultrastructure and chemical composition of the bacterial cell wall, marked by the absence or presence of an outer lipid membrane.[5][9]

All gram-positive bacteria are bounded by a single-unit lipid membrane, and, in general, they contain a thick layer (20–80 nm) of peptidoglycan responsible for retaining the Gram stain. A number of other bacteria—that are bounded by a single membrane, but stain Gram-negative due to either lack of the peptidoglycan layer, as in the Mycoplasmas, or their inability to retain the Gram stain because of their cell wall composition—also show close relationship to the Gram-positive bacteria. For the bacterial cells bounded by a single cell membrane, the term "monoderm bacteria" or "monoderm prokaryotes" has been proposed.[5][9]

In general, gram-positive bacteria are monoderms and have a single lipid bilayer whereas gram-negative bacteria are diderms and have two bilayers. Some taxa lack peptidoglycan (such as the domain Archaea, the class Mollicutes, some members of the Rickettsiales, and the insect-endosymbionts of the Enterobacteriales) and are gram-variable. This, however, does not always hold true. The Deinococcus-Thermus bacteria have gram-positive stains, although they are structurally similar to gram-negative bacteria with two layers. The Chloroflexi have a single layer, yet (with some exceptions[12]) stain negative.[13] Two related phyla to the Chloroflexi, the TM7 clade and the Ktedonobacteria, are also monoderms.[14][15]

Some Firmicute species are not gram-positive. These belong to the class Mollicutes (alternatively considered a class of the phylum Tenericutes), which lack peptidoglycan (gram-indeterminate), and the class Negativicutes, which includes Selenomonas and stain gram-negative.[11] Additionally, a number of bacterial taxa (viz. Negativicutes, Fusobacteria, Synergistetes, and Elusimicrobia) that are either part of the phylum Firmicutes or branch in its proximity are found to possess a diderm cell structure.[8][10][11] However, a conserved signature indel (CSI) in the HSP60 (GroEL) protein distinguishes all traditional phyla of gram-negative bacteria (e.g., Proteobacteria, Aquificae, Chlamydiae, Bacteroidetes, Chlorobi, Cyanobacteria, Fibrobacteres, Verrucomicrobia, Planctomycetes, Spirochetes, Acidobacteria, etc.) from these other atypical diderm bacteria, as well as other phyla of monoderm bacteria (e.g., Actinobacteria, Firmicutes, Thermotogae, Chloroflexi, etc.).[10] The presence of this CSI in all sequenced species of conventional LPS (lipopolysaccharide)-containing gram-negative bacterial phyla provides evidence that these phyla of bacteria form a monophyletic clade and that no loss of the outer membrane from any species from this group has occurred.[10] 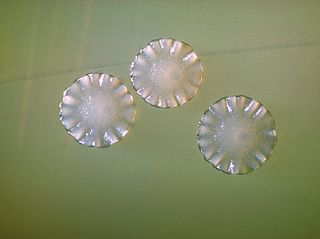 Colonies of a gram-positive pathogen of the oral cavity, Actinomyces sp.

In the classical sense, six gram-positive genera are typically pathogenic in humans. Two of these, Streptococcus and Staphylococcus, are cocci (sphere-shaped). The remaining organisms are bacilli (rod-shaped) and can be subdivided based on their ability to form spores. The non-spore formers are Corynebacterium and Listeria (a coccobacillus), whereas Bacillus and Clostridium produce spores.[16] The spore-forming bacteria can again be divided based on their respiration: Bacillus is a facultative anaerobe, while Clostridium is an obligate anaerobe.[17] Also, Rathybacter, Leifsonia, and Clavibacter are three gram-positive genera that cause plant disease. Gram positive bacteria are capable of causing serious and sometimes fatal infections in newborn infants.[18]

The adjectives 'gram-positive' and 'gram-negative' are named after Hans Christian Gram; as eponymous adjectives, they are conventionally written in lowercase.[19][20][21]