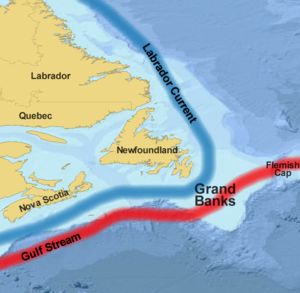 The Grand Banks of Newfoundland are a group of underwater plateaus southeast of Newfoundland on the North American continental shelf. These areas are relatively shallow, ranging from 80 to 330 feet (24–101 m) in depth. The cold Labrador Current mixes with the warm waters of the Gulf Stream here.

The mixing of these waters and the shape of the ocean bottom lifts nutrients to the surface. These conditions helped to create one of the richest fishing grounds in the world. Fish species include Atlantic cod, sword fish, haddock, and capelin. Shellfish include scallop and lobster. The area also supports large colonies of seabirds such as northern gannets, shearwaters, and sea ducks and various sea mammals such as seals, dolphins, and whales.

In addition to the effects on nutrients, the mixing of the cold and warm currents often causes fog in the area. It is also noted for its proximity to the sinking of the RMS Titanic, and thus the launching point of Titanic shipwreck expeditions.

The Grand Banks were extensively glaciated during the last glacial maximum. By approximately 13,000 years ago, the majority of the ice had melted, leaving the Grand Banks exposed as several islands extending for hundreds of kilometers. It is believed that rising sea levels submerged these around 8,000 years ago.[1] 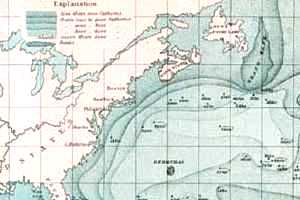 Historic map including the Grand Banks.

While there is no archaeological evidence for a European presence near the Grand Banks between the short-lived Greenland Norse settlement at L'Anse aux Meadows in CE 1000 and John Cabot's transatlantic crossing in 1497, there is some evidence that voyagers from Portugal,[2] the Basque Region[3] and England (especially those from Bristol)[4] and others[5] preceded Cabot.[6] In the 15th century some texts refer to a land called Bacalao, the land of the codfish, which is possibly Newfoundland. Within a few years of Cabot's voyage the existence of fishing grounds on the Grand Banks became generally known in Europe. Ships from France and Portugal were first to fish there, followed by those from Spain while ships from England were scarce in the early years.[7] These fish stocks were also important for the early economies of eastern Canada and New England.

On 18 November 1929, a major earthquake (known as the 1929 Grand Banks earthquake) on the southwestern part of the Grand Banks bordering the Laurentian Channel caused an underwater landslide which resulted in extensive damage to transatlantic cables and generated a rare Atlantic tsunami that struck the south coast of Newfoundland and eastern Cape Breton Island, claiming 28 lives in the Burin Peninsula.

Technological advances in fishing such as large factory ships and sonar, as well as geopolitical disputes over territorial sea and exclusive economic zone (EEZ) boundaries, have led to overfishing and a serious decline in the fish stocks of the Grand Banks from around 1990.

Canada's EEZ currently occupies the majority of the Grand Banks except for the lucrative "nose" (eastern extremity, near the Flemish Cap) and "tail" (southern extremity) of the fishing bank. The 1783 Treaty of Paris gave the United States shared rights to fish in these waters, but that section of the Treaty is no longer in force. The French territory Saint Pierre and Miquelon Exclusive Economic Zone occupies a pin-shaped section at the west edge of the Grand Banks, with the 22 km radius head of the pin surrounding the islands and the needle heading south for 348 km.

Canada is currently performing the hydrographic and geological surveys necessary for claiming the entire continental shelf off eastern Canada, under the auspices of the latest United Nations Convention on the Law of the Sea. Once this aspect of UNCLOS is ratified, Canada will presumably control these remaining parts of Grand Banks which are outside of its EEZ jurisdiction.

Petroleum reserves have also been discovered and a number of oil fields are under development in this region, most notably the Hibernia, Terra Nova, and White Rose projects; the harsh environment on the Grand Banks also led to the Ocean Ranger disaster.

Semi-fictional depictions of fishermen working on the Grand Banks can be found in Rudyard Kipling's novel Captains Courageous (1897) and in Sebastian Junger's non-fiction book The Perfect Storm (1997). The Grand Banks are also portrayed in the 1990 film The Hunt for Red October.