From Infogalactic: the planetary knowledge core
Jump to: navigation, search
File:TaftInvitation.jpg
An engraved White House invitation during the administration of William Howard Taft showing the now classic combination of copper plate round hand and the Seal of the President. 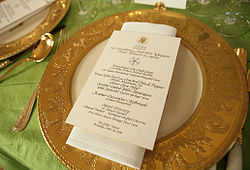 A calligraphed menu for a state dinner.
File:Adamsinvite1801.jpg
One of the earliest White House invitations – to a January 1801 dinner. A portion of the invitation was preprinted and then completed by writing in the event, date, and guests' names, in this case by First Lady Abigail Adams.

The Graphics and Calligraphy Office (GCO) is a unit of the Social Office at the White House, the official residence of the President of the United States. Located in the East Wing, the Graphics and Calligraphy Office coordinates and produces all non-political social invitations, place cards, presidential proclamations, letters patent, military commissions, and official greetings.

The design of White House invitations has evolved over time. Dinner invitations going back to the administration of John Adams, the first president to live in the White House, are archived and have inspired the current invitations. In President Adams' day invitations were letterpress printed with the passage reading "The President of the United States, requests the Pleasure of ______'s Company to Dine, on_____next at ___ o'Clock." Space allowed for the hand penned insertion of "& Mrs. Adams" if the First Lady were to attend, as well as individual guests' names, and the date and time.[2] A flowing round hand type of penmanship was used. This style of writing was found in writing manuals in the 18th century.

The custom of including a representation of the arms of the United States, by way of an eagle clutching an olive branch and arrows in its talons and a striped shield with stars became standard on invitations in the early 19th century. By the mid 19th century the more formal Great Seal of the United States was placed at the head of invitations. Text was engraved in black script, allowing space for the guest's name to be added individually. The Great Seal was engraved in burnished gold.

While much of the work of the Graphics and Calligraphy Office is centered on social events, the office also engrosses official documents including military commissions, presidential awards, appointments and proclamations.