From Infogalactic: the planetary knowledge core
Jump to: navigation, search
This article is about the textbook. For the television series, see Grey's Anatomy. For other uses, see Gray's Anatomy (disambiguation). 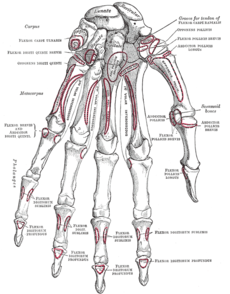 An illustration from the American 1918 edition

Gray's Anatomy is an English-language textbook of human anatomy originally written by Henry Gray and illustrated by Henry Vandyke Carter. Earlier editions were called Anatomy: Descriptive and Surgical and Gray's Anatomy: Descriptive and Applied, but the book's name is commonly shortened to, and later editions are titled, Gray's Anatomy. The book is widely regarded as an extremely influential work on the subject, and has continued to be revised and republished from its initial publication in 1858 to the present day. The latest edition of the book, the 41st, was published in September 2015.[1] 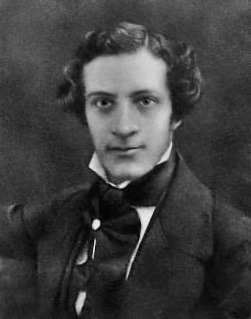 The English anatomist Henry Gray was born in 1827. He studied the development of the endocrine glands and spleen and in 1853 was appointed Lecturer on Anatomy at St George's Hospital Medical School in London. In 1855, he approached his colleague Henry Vandyke Carter with his idea to produce an inexpensive and accessible anatomy textbook for medical students. Dissecting unclaimed bodies from workhouse and hospital mortuaries through the Anatomy Act of 1832, the two worked for 18 months on what would form the basis of the book. Their work was first published in 1858 by John William Parker in London.[2] It was dedicated by Gray to Sir Benjamin Collins Brodie, 1st Baronet. An imprint of this English first edition was published in the United States in 1859, with slight alterations.[3][4] Gray prepared a second, revised edition, which was published in the United Kingdom in 1860, also by J.W. Parker.[5][6] However, Gray died the following year, at the age of 34, having contracted smallpox[5] while treating his nephew (who survived). His death had come just three years after the initial publication of his Anatomy Descriptive and Surgical. Even so, the work on his much-praised book was continued by others.[7] Longman's publication reportedly began in 1863, after their acquisition of the J.W. Parker publishing business.[8] This coincided with the publication date of the third British edition of Gray's Anatomy.[9] Successive British editions of Gray's Anatomy continued to be published under the Longman, and more recently Churchill Livingstone/Elsevier imprints, reflecting further changes in ownership of the publishing companies over the years.

In September 1896, reference to the English edition was dropped and it was published as the Fourteenth Edition, edited by Bern B. Gallaudet, F. J. Brockway, and J. P. McMurrich, who also edited the Fifteenth Edition (October 1901). There is also an edition dated 1896 which does still reference the English edition stating it is "A New Edition, Thoroughly Revised by American Authorities, from the thirteenth English Edition" and edited by T. Pickering Pick, F.R.C.S. and published by Lea Brothers & Co., Philadelphia and New York.[12]

Discrepancies in numbering of American and British editions

File:Gray190.png
An illustration from the American 1918 edition.

The newest, 41st edition of Gray's Anatomy was published on 25 September 2015 by Elsevier in both print and on-line versions, and is the first edition to have enhanced on-line content including anatomical videos and a bonus Gray's imaging library. The latest edition also has 24 specially invited on-line commentaries on controversial anatomical topics as diverse as advances in electron microscopy and fluorescence microscopy; the neurovascular bundles of the prostate; stem cells in regenerative medicine; the anatomy of facial ageing; and technical aspects and applications of diagnostic radiology.

The senior editor of this book and accompanying website on ExpertConsult [15] is Professor Susan Standring, who is Emeritus Professor of Anatomy at King's College London.[16] The three most recent editions differ from all previous editions in an important respect: they present anatomical structures by their regional anatomy (i.e. ordered according to what part of the body the structures are located in – e.g. the anatomy of the bones, blood vessels and nerves, etc. of the upper extremity is described in one place). All previous editions of Gray's Anatomy were organized by systemic anatomy (i.e. there were separate sections for the body's entire skeletal system, entire circulatory system and entire nervous system, etc.). The editors of the 39th edition acknowledged the validity of both approaches but switched to regional anatomy by popular demand.[17]

Older, out-of-copyright editions of the book continue to be reprinted and sold. On the internet in particular, there are numerous offers for older editions. However it is not always clear which (British or American) edition these books are republications of. Many seem to be reprints of the 1901 (probably U.S.) edition. Also on the internet, there are several sites where various older versions can be read online.[18][19][20] Although older editions may serve historic and artistic uses because their companion illustrations and anatomical cross sections are renowned for their rustic and often haunting presentation, they no longer represent an up-to-date anatomical understanding.[lower-alpha 2]

Henry Gray wrote the original version of Gray's Anatomy with an audience of medical students and physicians in mind, especially surgeons. For many decades however, precisely because Gray's textbook became such a classic, successive editors made major efforts to preserve its position as possibly the most authoritative text on the subject in English. Toward this end, a long-term strategy appears to have been to make each edition come close to containing a fully comprehensive account of the anatomical medical understanding available at the time of publication.[citation needed] Given the explosion of medical knowledge in the 20th century, it is easily appreciated that this led to a vast expansion of the book, which threatened to collapse under its own weight in a metaphorical and physical sense. From the 35th edition onward, increased efforts were made to reverse this trend and keep the book readable by students. Nevertheless, the 38th edition contained 2,092 pages in large format[21] – the highest page count of any and an increase from the 35th edition, which had 1,471 pages.[22] The current 40th edition has 1,576 pages. Newer editions of Gray's Anatomy –and even several recent older ones– are still considered to be the most comprehensive and detailed textbooks on the subject.[23] Despite the aforementioned efforts to keep Gray's Anatomy readable by students, when the 39th edition was published, students were identified as a secondary market for the book,[24] and companion publications such as Gray's Anatomy for Students,[lower-alpha 3] Gray's Atlas of Anatomy and Gray's Anatomy Review have also been published in recent years.[25]

In Philip Roth's novel The Anatomy Lesson, the main character Nathan Zuckerman wishes to study medicine. He hopes to get rid of his terrible pains in this way. In this context, Gray's textbook is briefly mentioned.

In Ian McEwan's Atonement, the work is studied by the character Robbie Turner.

In Mark Twain's The Adventures of Tom Sawyer, the book that Tom catches Becky Thatcher looking at, and of which she tears a page, is implied to be Gray's Anatomy.

In Abraham Verghese's novel Cutting for Stone, Shiva reads it.

In the episode Episode 6 "Wasiyat" of the Doordarshan TV series Byomkesh Bakshi, one of the murder suspects is reading the book.

Alasdair Gray uses pictures of the first edition of Gray's Anatomy as illustrations in his 1992 novel, Poor Things.

Gray's Anatomy makes a brief appearance in the 1991 film, The Addams Family. Granny is seen to make new recipes by combining Gray's Anatomy with "normal" cookbooks.

In the 1995 film The Young Poisoner's Handbook, the protagonist pores over Gray's Anatomy as well as other medical textbooks during his research on the effects and proper techniques of poisoning.

Gray's Anatomy also makes a brief appearance in the fourth episode of the third season of TNT television series Rizzoli & Isles when Dr. Isles (played by Sasha Alexander) takes the book off of a drawer and makes Angela (played by Lorraine Bracco) swear not to tell Jane (Angie Harmon) a secret.

Gray's Anatomy also makes a brief appearance in the 18th episode of the 2nd season of medical drama House (TV series) when Dr. House appears to be lying on the floor sleeping, and Dr. Wilson comes to talk to him about a dispute between Dr. Cameron and Dr. Foreman about writing journal articles on the same subject.

The interior illustrations were adapted by Isaac Marion in his Warm Bodies series from Gray's Anatomy. Also in the text of the books, one of the main characters refers to it when they see zombies in various states of decay.

In Dan Brown's novel Inferno, Sienna Brooks, as a child, reads all the 1,600 pages of Gray's Anatomy in ten days.

In the Star Trek: Voyager episode "Message in a Bottle", Harry Kim attempts to create a new Emergency Medical Hologram, but it is only able to recite the entire text of Gray's Anatomy instead of actually helping patients.

In The Walking Dead (TV series) episode "Now", the book is seen in the hands of Denise Cloyd who is desperately trying to save the life of Scott, a fellow resident in the Alexandria Safe Zone.

In the movie "The Apprenticeship of Duddy Kravitz" Duddy is caught sneaking a peek at the female anatomy section of a medical student's copy of Gray's Anatomy as Duddy unloads the student's luggage at the resort.