Greater Montreal is the most populous metropolitan area in Quebec, and the second most populous in Canada after Greater Toronto. As of 2015, Statistics Canada identifies Montreal's Census Metropolitan Area (CMA) as 4,258.31 square kilometres (1,644.14 sq mi) with a population of 4,027,100.[2]

The inner ring is composed of densely populated municipalities located in close proximity to Downtown Montreal. It includes the entire Island of Montreal, Laval, and the Urban Agglomeration of Longueuil.

The outer ring is composed of low-density municipalities located on the fringe of Metropolitan Montreal. Most of these cities and towns are semi-rural. Specifically, the term off-island suburbs refers to those suburbs that are located on the North Shore of the Mille-Îles River, those on the South Shore that were never included in the megacity of Longueuil, and those on the Vaudreuil-Soulanges Peninsula. Communities in that area are also informally referred to as the 450, after the telephone area code that has served the region since 1998.

Due to their proximity to Montreal's downtown core, some suburbs on the South Shore (Longueuil, Brossard, Saint-Lambert, and Boucherville) are usually not included in the off-island suburbs even though they are on the mainland. 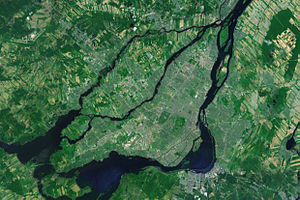 Kanesatake and Kahnawake are located within the Metropolitan Community, but are not part of it.

The Agence métropolitaine de transport (AMT) (English: Metropolitan Transportation Agency) plans, integrates, and coordinates public transport across Greater Montreal, including the Island of Montreal, Laval (Île Jésus), and communities along both the north shore of the Rivière des Mille-Îles and the south shore of the Saint Lawrence River. Established in 1996, the AMT's commuter rail system has five lines linking the downtown core with communities as far west as Hudson, as far east as Mont-Saint-Hilaire, and as far north as Saint-Jérôme. AMT's mandate also includes the management of reserved High-occupancy vehicle lanes, metropolitan bus terminuses, park-and-ride lots, and a budget of $163 million, which is shared amongst the transit corporations and inter-municipal public transit organizations. The AMT's territory spans 63 municipalities and one native reserve, 13 regional county municipalities, and 21 transit authorities. It serves a population of approximately 3.7 million people who make more than 750,000 trips daily.[citation needed]

The major transit commissions under the Metropolitan Transit Agency are:

(In Montreal, except where otherwise noted.)