From Infogalactic: the planetary knowledge core
Jump to: navigation, search
File:GreenRoomClintonNARA.jpg
The Green Room looking northeast during the administration of Bill Clinton. On top of the mantelpiece a French Empire mantel clock depicting Hannibal. 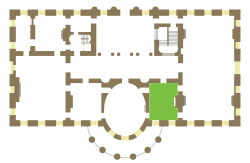 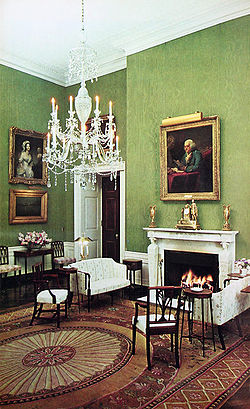 The Green Room is one of three state parlors on the first floor in the White House, the home of the President of the United States. It is used for small receptions and teas. During a state dinner, guests are served cocktails in the three state parlors before the president, first lady, and visiting head of state descend the Grand Staircase for dinner. The room is traditionally decorated in shades of green.

Descriptions of the Green Room's furnishings before the 1814 fire are limited. Following the 1816 rebuilding, inventories suggest the room initially contained French Empire items bought by President James Madison. Throughout most of the 19th century, the room was decorated in a series of revival styles. In 1902, a major renovation, guided by historical research, was implemented by the architectural firm of McKim, Mead, and White. Layers of complex Victorian ornamentation were replaced by a style called Colonial Revival, which was more similar to how the house was initially furnished. Heavily patterned floral wall covering was replaced by a simple green silk velvet. The c. 1852 Renaissance Revival mantel was replaced by a French Empire mantel purchased by President Monroe in 1819. A suite of reproduction French Directoire upholstered chairs and white painted caned reproduction English Regency furniture replaced a suite of overstuffed Turkish style sofas and chairs. Subsequent 20th-century presidents mostly maintained what could be described as a "Colonial" appearance with largely reproduction furniture.

The Kennedy restoration, begun in 1961, brought a more academic yet dramatic approach to the decoration of the Green Room. Henry Francis du Pont of the Winterthur Museum, with influence of French interior designer Stéphane Boudin, selected the Federal Style for the Green Room. Several significant pieces of antique furniture were acquired and placed in the room. Chief among these were a sofa once belonging to Daniel Webster and John and Abigail Adam's neoclassical silver hot-water urn. A labeled secretary, made by Baltimore cabinetmaker Joseph Burgess, was placed between the windows on the south wall. Four lolling chairs, or "Martha Washington" chairs, upholstered in a white and green neoclassically patterned silk, were acquired. A late 18th-century English Axminster carpet in a neoclassical pattern of an architectural medallion surrounded by rosettes, and anthemion in shades of taupe, sage green and pink was donated by an anonymous donor. The walls of the Green Room were hung with a moss green watered-silk chosen by Jacqueline Kennedy and Stéphane Boudin in 1962 and manufactured in France by Tassinari et Chatel. Many changes occurred during the Nixon administration under the direction of First Lady Pat Nixon. Clement Conger, the new White House curator appointed during the Nixon administration, had completed substantial Chippendale and neoclassical interiors at the United States Department of State. In the Green Room, as well as in the Blue and Red rooms, Conger addressed correcting the generic traditional plaster moldings installed during the Truman reconstruction, installing historically accurate crown molding and ceiling medallions. Conger commissioned Edward Vason Jones and David Byers to design new draperies of striped cream, green, and coral silk satin. Conger and Jones cited illustrations shown in an early 19th-century pattern book belonging to the Society for the Preservation of New England Antiquities (now called Historic New England). Coral and gilt ornamental cornices were constructed and installed above the windows. They are topped by hand-carved, gilded American eagles with outspread wings, a favorite decorative motif of the Federal period. The cornices are similar to those in the library of the Miles Brewton House in Charleston, South Carolina, and the South Drawing Room of the Sir John Soane House in London. The American textile workshop of Franco Scalamandré produced a copy of the Kennedy era moss green watered silk to be rehung on the walls. On the west wall above a Duncan Phyfe sofa, hang a pair of gilded girandole bull's eye wall sconces. Today the room contains several major pieces by the Scottish-born New York cabinetmaker Duncan Phyfe. They include a pair of work tables, side chairs with scroll arms, two card tables, and a pair of window benches. These replaced the more delicate Federal-era furniture approved by Mr. DuPont and Mrs. Kennedy in 1962.

The Green Room was refurbished during the summer of 2007 by First Lady Laura Bush with advisement from the Committee for the Preservation of the White House, Bush family interior designer Ken Blasingame, and White House curator William Allman. The refurbishment retained most of the Nixon-era Conger and Vason Jones design. Walls were again hung in a watered silk, a treatment originating during the Kennedy restoration, but this time in a more vertical and largely scaled moiré pattern of a darker shade. The coral color in the upholstered chairs and in the striped drapery fabric was intensified to a more vibrant shade, bordering on vermilion. The drapery recreates Edward Vason Jones' 1971 design but with the more intense vermilion in the silk and the painted cornice. The drapery design was simplified by removing four large tassels but retained the large bobble-fringe of the Nixon-era design. The green Turkish Kilim carpet installed in the Nixon administration was replaced by a new rug woven in the style of a French Savonnerie. It is somewhat similar in design to an antique Savonnerie acquired for the Red Room by Stéphane Boudin. As a part of the refurbishment the painting The Builders by Jacob Lawrence was acquired for the Green Room by the White House Acquisition Trust.[1] The Builders and Sand Dunes at Sunset, Atlantic City by Henry Ossawa Tanner are the only two paintings by African-American artists in the White House permanent collection.[2]

Refurbishments of the White House's historic rooms happen on a regular basis. Input from the current first family, along with reference to historical documents and sometimes new research help guide the decisions of the committee and curator.

The room was intended by architect James Hoban to be the "Common Dining Room." Thomas Jefferson did use it as a dining room and covered the floor with a green-colored canvas for protection. It was in the Green Room that William Wallace Lincoln, the third son of President Abraham Lincoln, was embalmed following his death, most likely from typhoid fever. Over the years, presidents and first ladies have used the room for happier times as well. Grace Goodhue Coolidge displayed what some considered risqué Art Deco sculpture here and used the room for small parties with friends. Eleanor Roosevelt entertained Amelia Earhart here, and President Kennedy thought it the most attractive and restful room on the state floor.