Green electricity in the United Kingdom

THIS IS SO OUT OF DATE, there's probably a tag or something but I'm no wiki expert 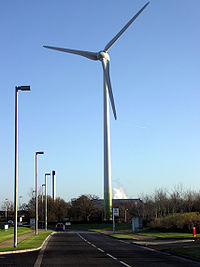 There are a number of suppliers offering 'green' electricity in the United Kingdom, either supplying electricity from existing environmentally friendly energy sources, promising to invest a proportion of profits into new renewable energy generating capacity, carrying out carbon offsetting, or some combination of these approaches.

Care needs to be taken in selecting a green energy supplier. A National Consumer Council report in December 2006 concluded that many green tariffs are not delivering the environmental benefits they claim to, and that consumers may not be making the positive contribution they think they are.[1]

In other cases green energy tariffs may involve carbon offsetting, rather than purchasing or investing in renewable energy,[4][5] a practice that does not meet with universal approval. George Monbiot, an English environmentalist and writer, has compared carbon offsets to the practice of purchasing indulgences during the Middle Ages, whereby people believed they could purchase forgiveness for their sins (instead of actually repenting and not sinning anymore). Monbiot also says that carbon offsets are an excuse for business as usual with regard to pollution.[6]

In June 2008, Defra announced that with effect from the current financial year (2008/9), Green Electricity is to be treated the same as average grid electricity for CO2 reporting purposes. Previously, it was treated as if there were no CO2 emissions associated with it.

Explaining the change, the Minister responsible (Hilary Benn) said[7] "I want to make sure that the green tariff market, which has grown rapidly over recent years, is clear for consumers and businesses about the precise benefit their tariff brings. Many energy suppliers offer green tariffs to businesses and domestic customers who want to make a contribution to environmental projects or help tackle climate change, but these differ in what they deliver." He added "It is increasingly difficult to demonstrate that buying a renewable electricity tariff is offering additional carbon emissions reductions compared with what suppliers are required to source to meet the Renewables Obligation. I have therefore decided that we will change the voluntary corporate reporting guidelines to bring them into line with current best practice and provide coherent carbon accounting. This will mean that for the reporting year 2008-9, best practice is expected to be for businesses to use a grid average rate - average rate of carbon emissions associated with electricity transmitted on the national grid - unless their supplier can prove the carbon benefits are additional." This does not affect green electricity generated on site (e.g. from photovoltaics or a micro-wind turbine), which can continue to be reported as producing zero emissions.

In 1999 the Future Energy national certification scheme for green electricity was launched, however it was closed in 2002, apparently because too few suppliers were prepared to accept the proposed revised requirements.[8]

In the absence of a replacement national scheme in the UK, the international Eugene Network, whose main purpose was to give accreditation to national green energy schemes, supported Ecotricity[9] and indicates that Good Energy would be ready for accreditation should a Eugene Standard compliant scheme be introduced in the UK.[10] The Eugene standard was discontinued in February 2009,[11] leaving no internationally recognised means of comparing green electricity.

In an attempt to end some of the premium priced offerings by suppliers which were doing no more than repackaging electricity that they had to buy under the Renewables Obligation, the UK Government's Office of Gas and Electricity Markets Ofgem proposed a voluntary scheme for independently verified energy ratings[12] for electricity suppliers. Initially this was intended to include a detailed analysis of the carbon content of the supply, but some critics felt that this lacked sufficient emphasis on additionality, and the actual energy used by consumers from the grid was always a mix of brown and green sources.

After running a series of workshops in early 2008, their proposals turned away from a focus on the source of electricity (and its associated carbon dioxide emissions), to look instead at whether an environmental benefit is demonstrated. Essentially, Ofgem suggest that this can only be done if the supplier invests part of payment received into one of the following activities:[13]

The initial draft of the guidelines would have excluded most of the products currently available on the UK market, including offerings from renewable energy specialists Good Energy and Ecotricity.

After consultation, Ofgem introduced modified Guidelines in February 2009.[14] These placed a greater emphasis on the matching principle, requiring that all electricity sold under the Scheme had to be matched by supplies from renewable sources (and excluding other low-carbon sources such as CHP or nuclear). The additionality criteria were simplified slightly to comprise:[15]

Certified tariffs are subject to an annual audit, to ensure that the matching and additionality criteria have been met. Consumers must also be given information on the suppliers overall fuel mix at the point of sale. Although aimed mainly at domestic consumers, the scheme can also certify tariffs aimed at small businesses with an annual energy consumption below 50,000kWh.

The Scheme is controlled by an independent Panel chaired by Solitaire Townsend, and the National Energy Foundation were appointed as the secretariat.

The Scheme was launched in February 2010, with the six big UK energy suppliers as members as well as Good Energy. Ecotricity elected not to join the scheme citing concerns about the additionality rules.[16] All suppliers offer domestic tariffs, but only some have offered small business tariffs under the scheme.