Greene County is a county located in the U.S. state of Pennsylvania. As of the 2010 census, the population was 38,686.[1] Its county seat is Waynesburg.[2] Greene County was created on February 9, 1796, from part of Washington County and named for General Nathanael Greene.

Greene County is part of the Pittsburgh DMA. It is located in the area of southwestern Pennsylvania that was formerly claimed by Virginia, the District of West Augusta.

The Meadow Ridge office park has served the county since the early 2000s.[12] 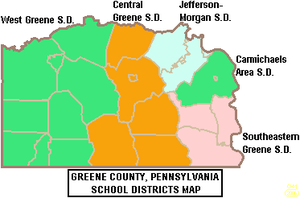 Some schools within the five above districts include: 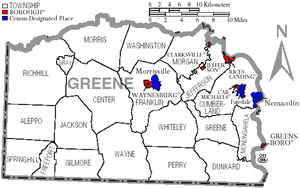 Under Pennsylvania law, there are four types of incorporated municipalities: cities, boroughs, townships, and, in at most two cases, towns. The following boroughs and townships are located in Greene County: