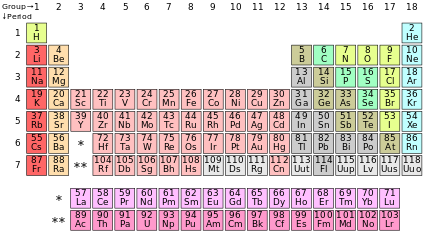 In the periodic table of the elements, each numbered column is a group.

In chemistry, a group (also known as a family) is a column of elements in the periodic table of the chemical elements. There are 18 numbered groups in the periodic table, but the f-block columns (between groups 2 and 3) are not numbered. The elements in a group have similar physical or chemical characteristics of the outermost electron shells of their atoms (i.e., the same core charge), as most chemical properties are dominated by the orbital location of the outermost electron. There are three systems of group numbering. The modern numbering group 1 to group 18 is recommended by the International Union of Pure and Applied Chemistry (IUPAC). It replaces two older naming schemes that were mutually confusing. Also, groups may be identified by their topmost element or have a specific name. For example, group 16 is variously described as oxygen group and chalcogen.

Two earlier group number systems exist: CAS (Chemical Abstracts Service) and old IUPAC. Both use numerals (Arabic or Roman) and letters A and B. Both systems agree on the numbers. The numbers indicate approximately the highest oxidation number of the elements in that group, and so indicate similar chemistry with other elements with the same numeral. The number proceeds in a linearly increasing fashion for the most part, once on the left of the table, and once on the right (see List of oxidation states of the elements), with some irregularities in the transition metals. However, the two systems use the letters differently. For example, potassium (K) has one valence electron. Therefore, it is located in group 1. Calcium (Ca) is in group 2, for it contains two valence electrons.

In the old IUPAC system the letters A and B were designated to the left (A) and right (B) part of the table, while in the CAS system the letters A and B are designated to main group elements (A) and transition elements (B). The old IUPAC system was frequently used in Europe while the CAS is most common in America. The new IUPAC scheme was developed to replace both systems as they confusingly used the same names to mean different things. The new system simply numbers the groups increasingly from left to right on the standard periodic table. The IUPAC proposal was first circulated in 1985 for public comments,[1] and was later included as part of the 1990 edition of the Nomenclature of Inorganic Chemistry.[2]

In history, several sets of group names have been used:[1][3]