From Infogalactic: the planetary knowledge core
(Redirected from Guadalest)
Jump to: navigation, search 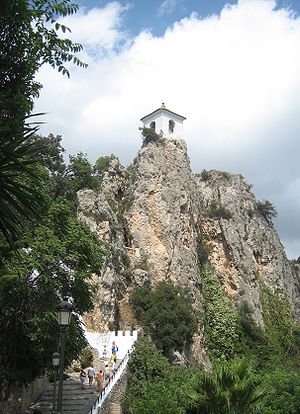 The touristic town of Guadalest.

El Castell de Guadalest (Valencian pronunciation: [eɫ kasˈteʎ de ɣwaðaˈlest]) or briefly Guadalest is a Valencian town and municipality located in a mountainous area of the comarca of Marina Baixa, in the province of Alicante, Spain. Guadalest has an area of 16 km² and, according to the 2002 census, a total population of 189 inhabitants.[citation needed]

The economy of Guadalest is mainly based on tourism. The town has many remarkable monuments and interesting places to visit: