Gujarati cuisine (Gujarati: ગુજરાતી ભોજન) refers to the cuisine of Gujarat, a state in western India. Despite having an extensive coastline providing wholesome seafood, it is primarily a vegetarian state due to the influence of Jain vegetarianism and traditional Hinduism, however many families include chicken, Mutton, and goat to these dishes.[1][2]

The typical Gujarati thali consists of rotli, dal or kadhi, rice, and shaak/sabzi (a dish made up of several different combinations of vegetables and spices, which may be either spicy or sweet). Gujarati cuisine varies widely in flavour and heat, depending on a family's tastes as well as the region of Gujarat to which they belong. North Gujarat, Kathiawad, Kachchh, and Surti Gujarat are the four major regions of Gujarat that contribute their unique touch to Gujarati cuisine. Many Gujarati dishes are distinctively sweet, salty, and spicy simultaneously.

Staples include homemade khichdi (rice and lentil or rice and mung bean), and chaas (buttermilk) and pickles as side. Main dishes are based on steamed cooked vegetables with different spices and dals that are added to a vaghar, which is a mixture of spices sterilized in hot oil that varies depending on the main ingredient. Salt, sugar, lemon, lime, and tomato are used frequently to prevent dehydration in an area where temperatures reach 50 °C (122 °F) in the shade. It is common to add a little sugar or jaggery to some of the sabzi/shaak and dal. The sweet flavour of these dishes is believed to neutralize the slightly bland taste of the vegetables. 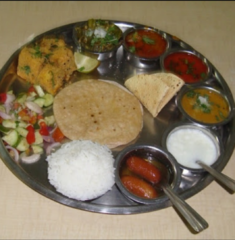 The cuisine changes with the seasonal availability of vegetables. In summer, when mangoes are ripe and widely available in market, for example, Keri no Ras (fresh mango pulp) is often an integral part of the meal. The spices used also change depending on the season. Garam masala and its constituent spices are used less in summer. Regular fasting, with diets limited to milk, dried fruits, and nuts, are commonplace.

In modern times, some Gujaratis have become increasingly fond of very spicy and fried dishes. There are many chefs who have come up with fusions of Western and Gujarati food. Gujaratis are predominantly vegetarians, even though pockets of the state consume chicken, eggs and fish.

Bajra Roti is a plain flat bread made from flour having nutritional value similar to other foods based on flours.[3] Common meals in villages near Saurashtra during the cold winters consists of thick rotis, termed bhakri, made of wheat flour, garlic chutney, onion, and chaas.

Gujarati cuisine is also distinctive in its wide variety of farsan — side dishes that complement the main meal and are served alongside it. Some farsan are eaten as snacks or light meals by themselves.

Gujaratis will often refer to dal-bhat-rotli-saak as their everyday meal. For special occasions, this basic quartet is supplemented with additional shaak, sweet dishes, and farsan. A festive Gujarati thali often contain over a dozen items. Dietary rules restrict the permissible combination of dishes.[citation needed] For example, if kadhi is to be served, then a lentil preparation such as chutti dal, vaal, or mug ni dal will also be included. The sweet dish accompanying kadhi will likely be milk or yogurt–based, like doodhpak or shrikhand. However, a yogurt-based raita would not be served with such a meal. Festive meals based on dal will typically have a wheat-based sweet dish like lapsi or ladoo as the sweet accompaniment. Many Gujarati families make and consume moong dal in their diet on Wednesdays. There are established combinations of spices that some believe to facilitate digestion, that are eaten with different foods. 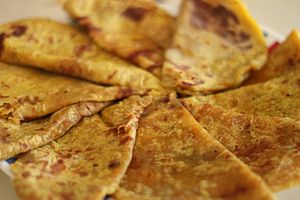 In addition to plain rice, Gujarati cuisine also includes rice based dishes such as: 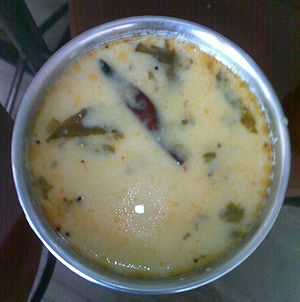 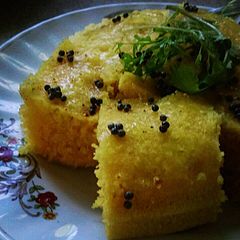 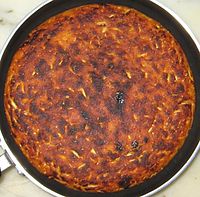 Farsan are side dishes in Gujarati cuisine. 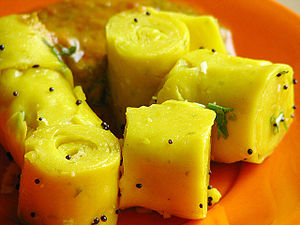 Most nasta (singular nasto) are deep fried and made with Gram Flour. 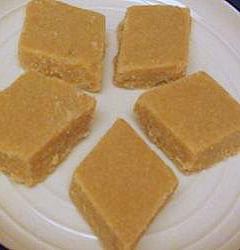 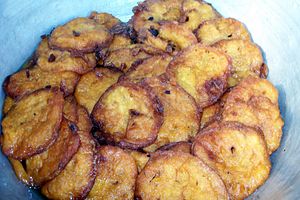 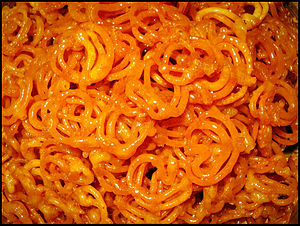 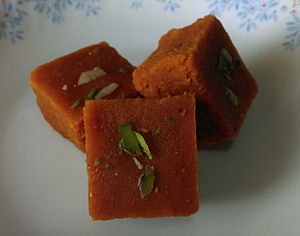