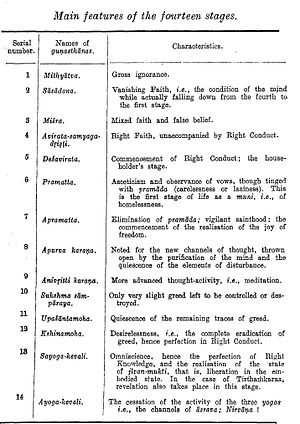 Fourteen stages on the path to liberation

Guṇasthāna (Sanskrit: "levels of virtue") are the fourteen stages of spiritual development and growth through which a soul gradually passes before it attains moksha (liberation).[1] According to Jainism, it is a state of soul from a complete dependence on karma to the state of complete dissociation from it. Here the word virtue does not mean an ordinary moral quality, but it stands for the nature of soul — knowledge, belief and conduct.

The fourteen Gunasthāna represents the soul's gradual manifestation of the innate qualities of knowledge, belief and conduct in a more and more perfect form.[2][3] Following are the stages of spiritual development:[4][5][6]

The first stage signifies gross ignorance.[7] If at this stage, a person meditates on his existence, there is a temporary suspension of the following:[8]

This gunasthāna represents the mental state of the soul in the process or act of falling from right faith. Here sā means "with" and sādana means "exhausted", hence that which is characterised by exhausted faith.[9]

Misra literally means mixed. At this stage, a person hovers between certainty and doubt on Right belief.[9]

When doubts of an individual are removed, he/she reaches this stage and becomes a samyagdrishti (true believer). The doubts may have been removed by meditation or the instruction of a spiritual teacher.[10]

First step of life as a Jain muni (monk).[10] The stage of complete self-discipline, although sometimes brought into wavering through negligence.

The stage of one in whom the passions are still occurring in a gross form.

The stage of one who practices the process called annivrtti karaņa and in whom however the passions are still occurring.

The stage of one in whom the passions occur in a subtle form.

The stage of one who has suppressed every passion but still does not possess omniscience.

The stage of who has annihilated every passion but does not yet possess omniscience. According to the Jain text, Gommatsāra Jīvakanda:

That possessionless saint (Nirgrantha), all of whose deluding, passions (Moha Kashaya) are destroyed, and whose thought is clear like the water kept in a pure vessel of crystal Jewel is said by the non-attached (Conquerors) (to be in the 12th stage of) destroyed-delusion, or delusionless (Kshina Kashaya).

Sa means "with" and yoga refers to the three channels of activity, i.e., mind, speech and body.[12] Kevali is a term used to refer the omniscient beings (arihantas). This stage is characterised by the destruction of all inimical (ghātiā) karmas and attainment of omniscience.[13]

This is the last stage on the Path, and is followed by the soul's destruction of the aghātiā karmas. Those who pass this stage are called siddha and become fully established in Right Faith, Right Knowledge and Right Conduct.[13]

The destruction of causes of bondage

The whole scheme of gunasthana in Jain philosophy is devised in a logical order according to the principle of decreasing sinfulness and increasing purity. At the first stage, all the five causes of bondage — Irrational beliefs (mithyatva), non-restraint (avirati), carelessness (pramada), passions (kashaya) and activities of mind, speech and body (yoga) — are in full operation.[14] Irrational beliefs (mithyatva) are partially suppressed in the second and third stages, and are fully eliminated in the fourth stage. In stages five and six, non-restraint (avirati) is gradually eliminated in stages. From the seventh stage onwards, carelessness is removed and only passions and activity exercise their influence. From the eleventh to the thirteenth all the passions are eliminated and only activity is present. On the last stage, there is no activity, hence no binding of karma.[14]

The destruction of karmas