H Street is a set of east-west streets in several of the quadrants of Washington, D.C. It is also used as an alternate name for the Near Northeast neighborhood, as H Street NW/NE is the neighborhood's main commercial strip.

The H Street NE/NW neighborhood was one of Washington's earliest and busiest commercial districts, and was the location of the first Sears Roebuck store in Washington.[1] H Street NE went into decline after World War II and businesses in the corridor were severely damaged during the 1968 riots. This part of the street did not start to recover until the 21st century.[2] 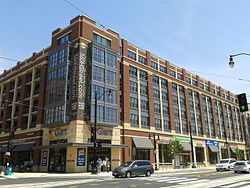 A Giant supermarket along the H St. corridor

In the mid-2000s, the Arts and Entertainment District began to revitalize as a nightlife district. The Atlas Theater, a Moderne-style 1930s movie theater that had languished since the 1968 riots—was refurbished as a dance studio and performance space, and is now the anchor of what is now being called the Atlas District. H Street NE became home to the H Street Playhouse, a black box theater where Theater Alliance and Forum Theatre are in residence; live music venues, such as the Red and the Black and the Rock & Roll Hotel; and restaurants and bars such as the Argonaut, Dangerously Delicious Pies, Showbar Presents the Palace of Wonders, the Pug, and Sticky Rice.

H Street NE rapidly gentrified after 2007. The median sales price of houses on or near H Street NW from July to September 2009 was $417,000.[2] H Street NE was voted the sixth most hipster place in America by Forbes magazine in September 2012.[3] This process of gentrification led to tensions with some previous residents, who felt that they were becoming less welcome as the neighborhood changed and worried about being priced out.[4][5]

In Northeast Washington, H Street continues uninterrupted from North Capitol Street to 15th Street NE, where it terminates in what is known as the "starburst intersection", where it meets Bladensburg Road, 15th Street, Benning Road, Maryland Avenue, and Florida Avenue.[6] After this intersection, there is a gap of two blocks where the street is interrupted by Hechinger Mall.[lower-alpha 1][7][8] H Street continues for a short segment between 17th and 24th Streets NE. The road does not continue east of the Anacostia River.

In Northwest Washington, H Street is the main street in Chinatown and one of the major east-west streets downtown. When Pennsylvania Avenue in front of the White House was closed to vehicular traffic in the 1990s, crosstown traffic that had formerly used Pennsylvania Avenue was rerouted to H and I streets. The street also passes Lafayette Park and through the George Washington University campus and the Foggy Bottom neighborhood before terminating at Rock Creek.

The city plan on which D.C. was laid out provides for a parallel H Street in the southwest and southeast quadrants of the city. Subsequent government actions, most notably the construction of I-395/I-295, disconnected the southern H Street in several places. In its current form, it does not run consecutively for more than two blocks at any point except for its easternmost extremity, near Fort Dupont Park.

Notable residents who lived on H Street include: