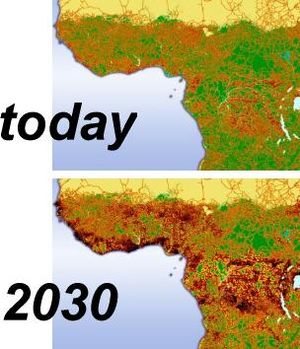 Fragmentation and destruction of Great Ape habitat in Central Africa, from the GLOBIO and GRASP projects. 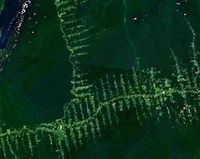 Deforestation and increased road-building in the Amazon Rainforest are a significant concern because of increased human encroachment upon wild areas, increased resource extraction and further threats to biodiversity.

Evidence of habitat destruction through natural processes such as volcanism, fire, and climate change is found in the fossil record.[1] For example, habitat fragmentation of tropical rainforests in Euramerica 300 million years ago led to a great loss of amphibian diversity, but simultaneously the drier climate spurred on a burst of diversity among reptiles.[1]

Habitat fragmentation is frequently caused by humans when native vegetation is cleared for human activities such as agriculture, rural development, urbanization and the creation of hydroelectric reservoirs. Habitats which were once continuous become divided into separate fragments. After intensive clearing, the separate fragments tend to be very small islands isolated from each other by cropland, pasture, pavement, or even barren land. The latter is often the result of slash and burn farming in tropical forests. In the wheat belt of central western New South Wales, Australia, 90% of the native vegetation has been cleared and over 99% of the tall grass prairie of North America has been cleared, resulting in extreme habitat fragmentation.

One of the major ways that habitat fragmentation affects biodiversity is by reduction in the amount of available habitat (such as rainforests, boreal forests, oceans, marshlands, etc.) for all organisms in an ecological niche. Habitat fragmentation invariably involves some amount of habitat destruction. Plants and other sessile organisms in these areas are usually directly destroyed. Mobile animals (especially birds and mammals) retreat into remnant patches of habitat. This can lead to crowding effects and increased competition.

The remaining habitat fragments may be smaller or adjusted from than the original habitat. Species that can move between fragments may use more than one fragment and continue normally and with no change in breeding. Species, which cannot move between fragments, must evolve through a process called Speciation. Speciation occurs when a group within a species separates from other members (habitat fragmentation being one of the causes) of its original species and develops its own unique characteristics to better fit the new environment. The demands of a different environment or the characteristics of the members of the new fragment will differentiate the new species from their ancestors before fragmentation occurred.[2] 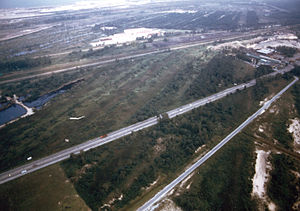 Area is the primary determinant of the number of species in a fragment.[3] The size of the fragment will influence the number of species which are present when the fragment was initially created, and will influence the ability of these species to persist in the fragment. Small fragments of habitat can only support small populations of plants and animals and small populations are more vulnerable to extinction. Minor fluctuations in climate, resources, or other factors that would be unremarkable and quickly corrected in large populations can be catastrophic in small, isolated populations. Thus fragmentation of habitat is an important cause of species extinction.[3] Population dynamics of subdivided populations tend to vary asynchronously. In an unfragmented landscape a declining population can be "rescued" by immigration from a nearby expanding population. In fragmented landscapes, the distance between fragments may prevent this from happening. Additionally, unoccupied fragments of habitat that are separated from a source of immigrants by some barrier are less likely to be repopulated than adjoining fragments. Even small species such as the Columbia spotted frog are reliant on the rescue effect. Studies showed 25% of juveniles travel a distance over 200m compared to 4% of adults. Of these, 95% remain in their new locale, demonstrating that this journey is necessary for survival.[4]

Additionally, habitat fragmentation leads to edge effects. Microclimatic changes in light, temperature and wind can alter the ecology around the fragment, and in the interior and exterior portions of the fragment. Fires become more likely in the area as humidity drops and temperature and wind levels rise. Exotic and pest species may establish themselves easily in such disturbed environments, and the proximity of domestic animals often upsets the natural ecology. Also, habitat along the edge of a fragment has a different climate and favours different species from the interior habitat. Small fragments are therefore unfavourable for species which require interior habitat.

Habitat fragmentation is often a cause of species becoming threatened or endangered. The existence of viable habitat is critical to the survival of any species, and in many cases the fragmentation of any remaining habitat can lead to difficult decisions for conservation biologists. Given a limited amount of resources available for conservation is it preferable to protect the existing isolated patches of habitat or to buy back land to get the largest possible continuous piece of land? This ongoing debate is often referred to as SLOSS (Single Large or Several Small).

One solution to the problem of habitat fragmentation is to link the fragments by preserving or planting corridors of native vegetation. This has the potential to mitigate the problem of isolation but not the loss of interior habitat. In rare cases a conservation reliant species may gain some measure of disease protection by being distributed in isolated habitats.

Another mitigation measure is the enlargement of small remnants in order to increase the amount of interior habitat. This may be impractical since developed land is often more expensive and could require significant time and effort to restore.

The best solution is generally dependent on the particular species or ecosystem that is being considered. More mobile species, like most birds, do not need connected habitat while some smaller animals, like rodents, may be more exposed to predation in open land. These questions generally fall under the headings of metapopulations island biogeography.