The Hadean /ˈheɪdiən/ is a geologic eon of the Earth, and lies before the Archean. It began with the formation of the Earth about 4.6 billion years ago and ended, as defined by the ICS, 4 billion years ago.[1] The name "Hadean" comes from Hades, the ancient Greek god of the underworld, in reference to the hellish conditions on Earth at the time: the planet had just formed and was still very hot due to high volcanism, a partially molten surface and frequent collisions with other Solar System bodies. The geologist Preston Cloud coined the term in 1972, originally to label the period before the earliest-known rocks on Earth. W. Brian Harland later coined an almost synonymous term: the "Priscoan period". Other, older texts simply refer to the eon as the Pre-Archean. Nonetheless, in 2015, "remains of biotic life" were found in 4.1 billion-year-old rocks in Western Australia.[2][3] According to one of the researchers, "If life arose relatively quickly on Earth ... then it could be common in the universe."[2]

The Hadean was originally thought to be a violent and inhospitable period in the history of Earth. Hence, it receives its name from Hades (/ˈheɪdiːz/; from Ancient Greek Ἅιδης/ᾍδης, Hāidēs; Doric Ἀΐδας Aidas), the ancient Greek god of the underworld.[4] With recent discoveries of zircon crystals and other indicators of water and "seeds of life" dating to the Hadean period, it is now theorized that the land and oceans of the mid-to-late (and possibly early) Hadean were somewhat less hostile to organic life than previously believed.

Since few geological traces of this eon remain on Earth, there is no official subdivision. However, the Lunar geologic timescale embraces several major divisions relating to the Hadean and so these are sometimes used in a somewhat informal sense to refer to the same periods of time on Earth.

The Lunar divisions are:

In the last decades of the 20th century geologists identified a few Hadean rocks from Western Greenland, Northwestern Canada, and Western Australia.

The oldest dated zircon crystals, enclosed in a metamorphosed sandstone conglomerate in the Jack Hills of the Narryer Gneiss Terrane of Western Australia, date to 4.404 ± 0.008 Ga.[6] This zircon is a slight outlier, with the oldest consistently-dated zircon falling closer to 4.35 Ga[7]—around 200 million years after the hypothesized time of the Earth's formation. 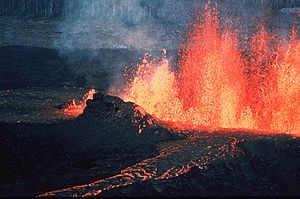 The newly formed Hadean Earth experienced very high temperatures due to extreme volcanism and frequent collisions with other bodies, but eventually began to cool.

A sizeable quantity of water would have been in the material that formed the Earth.[8] Water molecules would have escaped Earth's gravity more easily when it was less massive during its formation. Hydrogen and helium are expected to continually escape (even to the present day) due to atmospheric escape. 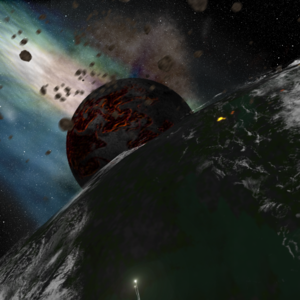 Illustration of Earth and the Moon during a later period. Note increased proximity of the two, dark green ocean of water with large quantities of iron(II)oxide and clouds of carbon dioxide. 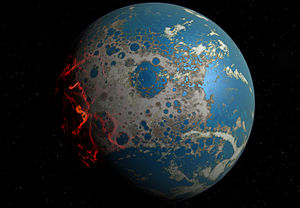 An artist's illustration of the young Earth during the Hadean Eon 4 billion years ago.

Part of the ancient planet is theorized to have been disrupted by the impact that created the Moon, which should have caused melting of one or two large areas. Present composition does not match complete melting and it is hard to completely melt and mix huge rock masses.[9] However, a fair fraction of material should have been vaporized by this impact, creating a rock vapor atmosphere around the young planet. The rock vapor would have condensed within two thousand years, leaving behind hot volatiles which probably resulted in a heavy CO
2 atmosphere with hydrogen and water vapor. Liquid water oceans existed despite the surface temperature of 230 °C (446 °F) because of the atmospheric pressure of the heavy CO
2 atmosphere. As cooling continued, subduction and dissolving in ocean water removed most CO
2 from the atmosphere but levels oscillated wildly as new surface and mantle cycles appeared.[10]

Study of zircons has found that liquid water must have existed as long ago as 4,400 million years ago, very soon after the formation of the Earth.[11][12][13] This requires the presence of an atmosphere. The Cool Early Earth theory covers a range from about 4,400 to 4,000 million years ago.

A September 2008 study of zircons found that Australian Hadean rock holds minerals that point to the existence of plate tectonics as early as 4,000 million years ago.[14][15] If this is true, the time when Earth finished its transition from having a hot, molten surface and atmosphere full of carbon dioxide, to being very much like it is today, can be roughly dated to about 4.0 billion years ago. The actions of plate tectonics and the oceans trap vast amounts of carbon dioxide, thereby eliminating the greenhouse effect and leading to a much cooler surface temperature and the formation of solid rock, and possibly even life.[14][15]