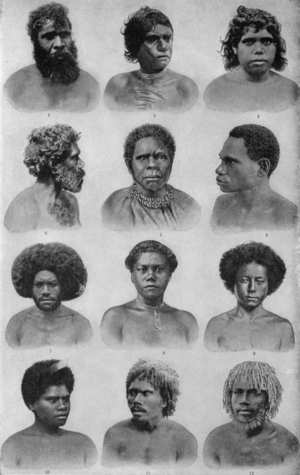 Images of Aboriginal people from a 1914 student textbook.

Half-Caste Act was the common name given to Acts of Parliament passed in Victoria and Western Australia in 1886.[1] They became the model for legislation of Aboriginal communities throughout Australia, such as the Aboriginal Protection and restriction of the sale of opium act 1897 in Queensland.[2]

In particular, the 1886 act started to remove Aboriginal people of mixed descent, known as 'half-castes', from the Aboriginal stations or reserves to force them to assimilate into European society. These expulsions separated families and communities, causing distress and leading to protest. Nevertheless, the Board refused to assist the expelled people. It was assumed that the expulsions would lead to the decline in the population of the reserves and their eventual closure.

The failure of this policy and its inhumanity led to Victoria's Aborigines Act of 1910 and Aboriginal Lands Act of 1970, which abandoned this policy.[3] 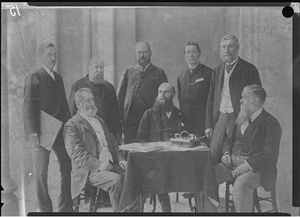 Before 1886 dealings with "natives" in Western Australia had been the responsibility of the UK Colonial Office.[dubious – discuss] In 1886 an Aboriginal Protection Board was established with five members and a secretary, all of whom were nominated by the Governor.

Following the furore over the Fairburn Report (which revealed slavery conditions among Aboriginal farm workers) and the work of the Rev. John Gribble, Parliament introduced the Aborigines Protection Act 1886 (WA), or 'Half-caste act. This introduced employment contracts between employers and Aboriginal workers over the age of 14. There was no provision in the 1886 WA Act for contracts to include wages. But, employees were to be provided with "substantial, good and sufficient rations", clothing and blankets. The 1886 WA Act provided a resident magistrate with the power to indenture 'half-caste' and Aboriginal children, from a suitable age, until they turned 21. An Aboriginal Protection Board, was also established to prevent the abuses reported earlier, but rather than protect Aborigines, it mainly succeeded in putting them under tighter government control. It was intended to enforce contracts, employment of prisoners and apprenticeships, but there was not sufficient power to enforce clauses in the north, and they were openly flouted. The Act defined as "Aboriginal" "every Aboriginal native of Australia, every Aboriginal half-caste, or child of a half-caste". Governor Broome insisted that the act contain within it a clause permitting traditional owners to continue hunting on their tribal lands.

The effect of the Act was to give increasing power to the Board over Aboriginal people, rather than setting up a system to punish whites for wrongdoing in relation to Aboriginal people. An Aboriginal Department was set up, under the office of the Chief Protector of Aborigines. Nearly half of the Legislative Council voted to amend the act for contract labour as low as age 10 but it was defeated. Mackenzie Grant, the member for the north claimed that child labour of age 6 or 7 was a necessary commonplace, as "in this way they gradually become domesticated". The Attorney General Septimus Burt, in debate on the 2nd reading speech, claimed that contracts were being issued, not for current work, but to hold Aboriginal people as slaves on stations for potential future work, and so prevent them from being free to leave.

As the boards had limited funds Protectors received very limited remuneration, and so a range of people were appointed as local Protectors, including Resident Magistrates, Jail Wardens, Justices of the Peace and in some cases ministers of religion, though most were local Police Inspectors. The minutes of the board show they mostly dealt with matters of requests from religious bodies for financial relief and reports from Resident or Police Magistrates pertaining to trials and convictions of Aboriginal people under their jurisdiction.

Aboriginal protection boards also issued permits to allow Aboriginals the right to leave their respective missions and enter the mainstream society for a set period of time.