The term hardened steel is often used for a medium or high carbon steel that has been given the heat treatments of quenching followed by tempering. The quenching results in the formation of metastable martensite, the fraction of which is reduced to the desired amount during tempering. This is the most common state for finished articles such as tools and machine parts. In contrast, the same steel composition in annealed state will be softer as required for forming and machining.

Depending on the temperature and composition of the steel, it can be hardened or softened. In order to make steel harder, it must be heated to very high temperatures. The final result of exactly how hard the steel will become depends on the amount of carbon present in the metal. Only steel that is high in carbon can be hardened and tempered. If a metal does not contain the necessary quantity of carbon, then its crystalline structure cannot be broken, and therefore the physical makeup of the steel cannot be altered.

Many times the term hardening steel will be associated with tempered steel. Both processes are used hand in hand when hardening steel. The two part process begins with hardening the steel so that it becomes tough and will not wear over time. However, many times this process leaves the steel very brittle and susceptible to breaking during use. Tempering reduces the hardness of the forged steel very slightly but improves the overall product as it results in steel that is much less brittle. 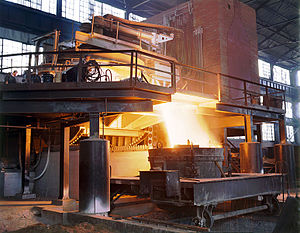 An electric arc furnace being tapped.

The two major processes of hardening and tempering can be broken down into four major steps. First, a piece of metal is heated gradually until it reaches a high temperature. When the entire sample reaches a high temperature, a great heat intensity is applied to the area that will be hardened. When the steel reaches a temperature that causes it to turn red, it is time for the next step. Next, the piece of metal is removed and placed directly into cool water. The steel is now very hard, but as discussed above, very brittle. At this point in the process, the hardening has completed and it is time to move onto step three and the second phase of tempering. Step three involves reheating the steel in the end which received the most intense heat in step one. The metal is heated until it turns the indicative blue color, which means tempering has occurred and the heat source is cut off. The last step is to allow the new hardened and tempered steel to cool on its own. After that has taken place, hardened steel has been synthesized. A visual representation of this process may make the concept easier to understand.

Although most people cannot determine if steel has undergone the hardening and tempering process by simply looking at it, there is a reliable and simple test. When examining a piece of steel, obtain a metal file and file an edge of the selected metal. If the piece of steel has not undergone the hardening and tempering process, the metal file should easily make an indention in the metal. Along with the visible evidence, a distinct sound will be heard while the unhardened metal is filed. If the metal has been hardened and tempered, then the file will have relatively no effect on the metal, and a very different sound will be heard. 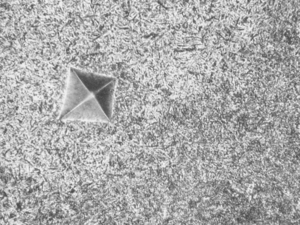