Harold Eugene Edgerton also known as Papa Flash (April 6, 1903 – January 4, 1990) was a professor of electrical engineering at the Massachusetts Institute of Technology.[1] He is largely credited with transforming the stroboscope from an obscure laboratory instrument into a common device. He also was deeply involved with the development of sonar and deep-sea photography, and his equipment was used by Jacques Cousteau in searches for shipwrecks and even the Loch Ness monster.[2]

Edgerton was born in Fremont, Nebraska, on April 6, 1903, the son of Mary Nettie Coe and Frank Eugene Edgerton,[3][4] a descendant of Richard Edgerton, one of the founders of Norwich, Connecticut and a descendant of Governor William Bradford (1590–1657) of the Plymouth Colony and a passenger on the Mayflower. His father was a lawyer, journalist, author and orator and served as the assistant attorney general of Nebraska from 1911 to 1915. Harold grew up in Aurora, Nebraska. He also spent some of his childhood years in Washington, D.C., and Lincoln, Nebraska. 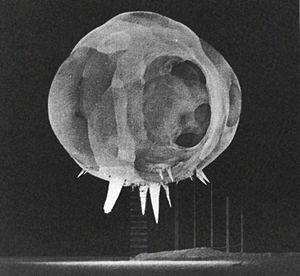 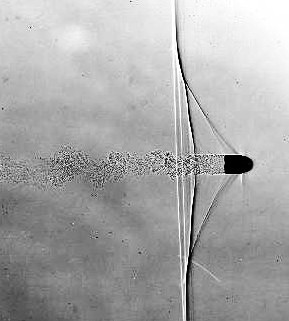 Shadowgraph of bullet in flight using Edgerton's equipment and stroboscope

In 1937 Edgerton began a lifelong association with photographer Gjon Mili, who used stroboscopic equipment, in particular, multiple studio electronic flash units, to produce strikingly beautiful photographs, many of which appeared in Life Magazine. When taking multiflash photographs this strobe light equipment could flash up to 120 times a second. Edgerton was a pioneer in using short duration electronic flash in photographing fast events photography, subsequently using the technique to capture images of balloons at different stages of their bursting, a bullet during its impact with an apple, or using multiflash to track the motion of a devil stick, for example. He was awarded a bronze medal by the Royal Photographic Society in 1934, the Howard N. Potts Medal from the Franklin Institute in 1941,[6] the David Richardson Medal by the Optical Society of America in 1968,[7] the Albert A. Michelson Medal from the same Franklin Institute in 1969,[8] and the National Medal of Science in 1973.[9]

Edgerton teamed up with Kenneth J. Germeshausen to do consulting work with different industrial clients. Later Herbert Grier joined them. The company name "Edgerton, Germeshausen, and Grier" was changed to EG&G in 1947. EG&G became a prime contractor for the Atomic Energy Commission and had a major role in photographing and recording nuclear tests for the United States through the fifties and sixties. For this role Edgerton and Charles Wykoff and others at EG&G developed and manufactured the Rapatronic camera

His work was instrumental in the development of side-scan sonar technology, used to scan the sea floor for wrecks. Edgerton worked with the undersea explorer Jacques Cousteau, by first providing him with custom designed underwater photographic equipment featuring electronic flash, and then by developing sonar techniques used to discover the Britannic. Edgerton participated in the discovery of the American Civil War battleship USS Monitor. While working with Cousteau, he acquired the nickname he is still known by in photographic circles, "Papa Flash".

In addition to having the scientific and engineering acumen to perfect strobe lighting commercially, Edgerton is equally recognized for his visual aesthetic: many of the striking images he created in illuminating phenomena that occurred too fast for the naked eye adorn art museums worldwide. In 1940, his high speed stroboscopic short film Quicker'n a Wink won an Oscar.[10]

Edgerton was appointed a professor of electrical engineering at the Massachusetts Institute of Technology (MIT) in 1934.[11] In 1956, Edgerton was elected a Fellow of the American Academy of Arts and Sciences.[12] He was especially loved by MIT students for his willingness to teach and his kindness: "The trick to education", he said, "is to teach people in such a way that they don't realize they're learning until it's too late". His last undergraduate class, taught during fall semester 1977, was a freshman seminar titled "Bird and Insect Photography". One of the graduate student dormitories at MIT carries his name.

In 1962, Dr. Edgerton appeared on I've Got a Secret, where he demonstrated strobe flash photography by shooting a bullet into a playing card and photographing the result.

After graduating from the University of Nebraska at Lincoln, Edgerton married Esther May Garrett[13] in 1928. She was born in Hamilton County, Nebraska on September 8, 1903 and died on March 9, 2002 in Charlestown, South Carolina. She received a bachelor's degree in mathematics, music and education from the University of Nebraska - Lincoln. A skilled pianist and singer, she attended the New England Conservatory of Music and taught in public schools in Aurora, Nebraska and Boston. During their marriage they had three children: Mary Louise (4/21/1931), William Eugene (8/9/1933), Robert Frank (5/10/1935). His sister, Mary Ellen Edgerton, was the wife of L. Welch Pogue (1899–2003) a pioneering aviation attorney and Chairman of the old Civil Aeronautics Board. David Pogue, a technology writer, journalist and commentator, is his great nephew.

Edgerton remained active throughout his later years, and was seen on the MIT campus many times after his official retirement. He died suddenly on January 4, 1990 at the MIT Faculty Club at the age of 86, and is buried in Mount Auburn Cemetery, Cambridge, Massachusetts.[14]

On July 3, 1990, in an effort to memorialize his accomplishments, several community members in Aurora, Nebraska decided to construct a "Hands-On" science center. It was designated as a "teaching museum," that would preserve Doc's work and artifacts, as well as feature the "Explorit Zone" where people of all ages could participate in hands-on exhibits and interact with live science demonstrations. After five years of private and community-wide fund-raising, as well as individual investments by Doc's surviving family members, the Edgerton Explorit Center was officially dedicated on September 9, 1995.[15]

At MIT, the Edgerton Center, founded in 1992, is a hands-on laboratory resource for undergraduate and graduate students, and also conducts educational outreach programs for high school students and teachers.[16]

Some of Edgerton's noted photographs are