For other uses, see Harpoon (disambiguation). 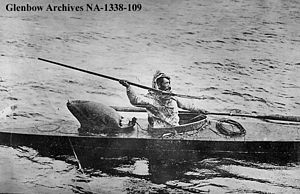 A harpoon is a long spear-like instrument used in fishing, whaling, sealing, and other marine hunting to catch fish or large marine mammals such as whales. It accomplishes this task by impaling the target animal and securing it with barbs or toggling claws, allowing the fishermen to use a rope or chain attached to the butt of the projectile to catch the animal. A harpoon can also be used as a weapon. 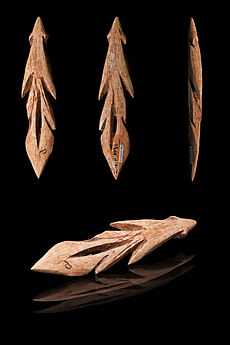 In the 1990s Zaire (nowadays the Democratic Republic of the Congo), harpoon points, known as the Semliki harpoons or the Katanda harpoons, were found in the Katanda region. As the earliest known harpoons, these weapons were made and used 90,000 years ago, most likely to spear catfishes.[1]

Later, in Europe, spearfishing with poles (harpoons) became widespread in palaeolithic times, especially during the Solutrean and Magdalenian periods. Cosquer Cave in Southern France contains cave art over 16,000 years old, including drawings of seals which appear to have been harpooned.[2]

There are references to harpoons in ancient literature; though, in most cases, the descriptions do not go into detail. An early example from the Bible in Job 41:7: "Canst thou fill his skin with barbed irons? or his head with fish spears?"

The Greek historian Polybius (c. 203 BC – 120 BC), in his Histories, describes hunting for swordfish by using a harpoon with a barbed and detachable head.[3] Copper harpoons were known to the seafaring Harappans[4] well into antiquity.[5] Early hunters in India include the Mincopie people, aboriginal inhabitants of India's Andaman and Nicobar islands, who have used harpoons with long cords for fishing since early times.[6]

The two flue harpoon was the primary weapon used in whaling around the world, but it cut through the blubber when under stress. This flaw was corrected with the creation of the single flue harpoon; by removing one of the flues, the head of the harpoon was narrowed, making it easier for it to penetrate deep enough to hold fast. In the Arctic, the indigenous people used the more advanced toggling harpoon design. In the early 19th century the one flue harpoon was introduced, which reduced failed harpoons due to the head cutting its way out of the body of the whale. In the mid-19th century, the toggling harpoon was adapted by Lewis Temple, using iron. The Temple toggle was widely used, and quickly came to dominate whaling. 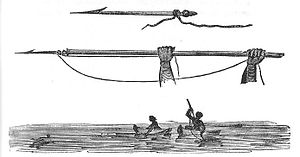 "Manner in which Natives of the East Coast strike turtle." Near Cooktown, Australia. From Phillip Parker King's Survey. 1818.

In his famous novel, Moby-Dick, author Herman Melville explained the reason for the harpoon's effectiveness:

In most land animals there are certain valves or flood gates in many of their veins, whereby when wounded, the blood is in some degree at least instantly shut off in certain directions. Not so with the whale; one of whose peculiarities is, to have an entire non-valvular structure of the blood-vessels, so that when pierced even by so small a point as a harpoon, a deadly drain is at once begun upon his whole arterial system; and when this is heightened by the extraordinary pressure of water at a great distance below the surface, his life may be said to pour from him in incessant streams. Yet so vast is the quantity of blood in him, and so distant and numerous its interior fountains, that he will keep thus bleeding and bleeding for a considerable period; even as in a drought a river will flow, whose source is in the well springs of far off and undiscernible hills.

He also describes another device that was at times a necessary addition to harpoons:

All whale-boats carry certain curious contrivances, originally invented by the Nantucket Indians, called druggs. Two thick squares of wood of equal size are stoutly clenched together, so that they cross each other's grain at right angles; a line of considerable length is then attached to the middle of this block, and the other end of the line being looped, it can in a moment be fastened to a harpoon. It is chiefly among gallied whales that this drugg is used. For then, more whales are close round you than you can possibly chase at one time. But sperm whales are not every day encountered; while you may, then, you must kill all you can. And if you cannot kill them all at once, you must wing them, so that they can be afterwards killed at your leisure. Hence it is that at times like these the drugg comes into requisition. 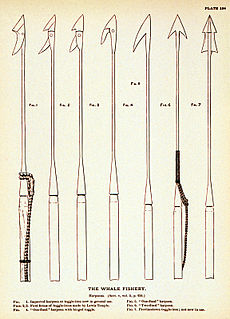 Harpoons used in the whale fishery, 1887, including new design from Provincetown whalemen

The first use of explosives in the hunting of whales was made by the British South Sea Company in 1737, after some years of declining catches. A large fleet was sent, armed with cannon-fired harpoons. Although the weaponry was successful in killing the whales, most of the catch sank before being retrieved. However, the system was still occasionally used, and underwent successive improvements at the hands of various inventors over the next century, including Abraham Stagholt in the 1770s and George Manby in the early 19th century.[9]

William Congreve, a British inventor who invented some of the first rockets for military use, designed a rocket-propelled harpoon for whaling in the 1820s. The shell was designed to explode on contact and impale the whale with the harpoon. The weapon was in turn attached by a line to the boat, and the hope was that the explosion would generate enough gas within the whale to keep it afloat for retrieval. Expeditions were sent out to try this new technology; many whales were killed, but most of them sank.[10] Although it was the invention of Foyn in the 1870s that modernized the whaling industry with regard to sperm whales, these earlier devices, called bomb lances did become widely used for the hunting of other whales, including humpbacks and right whales.[9] A notable user of these early explosive harpoons was the American Thomas Welcome Roys in 1865, who set up a shore station in Seydisfjördur, Iceland. A slump in oil prices after the American Civil War forced their endeavor into bankruptcy in 1867.[11] Norwegian, Svend Foyn, also studied the American method in Iceland.[12]

In 1867, a Danish fireworks manufacturer, Gaetano Amici, patented a cannon fired harpoon, and in the same year, an Englishman, George Welch, patented a grenade harpoon very similar to Svend Foyn's later successful invention. Another early version of the explosive harpoon was designed by Jacob Nicolai Walsøe, a Norwegian painter and inventor. His 1851 application was rejected by the interior ministry on the grounds that he had received public funding for his experiments.

In 1870, a Norwegian man named Svend Foyn successfully patented and pioneered the modern exploding whaling harpoon and gun. His basic design is still in use today. He perceived the failings of other methods and solved these problems in his own system. He included, with the help of H.M.T. Esmark, a grenade tip that exploded inside the whale. This harpoon design also utilized a shaft that was connected to the head with a moveable joint. His original cannons were muzzle-loaded with special padding and also used a unique form of gunpowder. The cannons were later replaced with safer breech-loading types.[11][12]

Together with the steam-powered whale catcher, this development ushered in the modern age of commercial whaling. Euro-American whalers were now equipped to hunt faster and more powerful species, such as the rorquals. Because rorquals sank when they died, later versions of the exploding harpoon injected air into the carcass to keep it afloat. 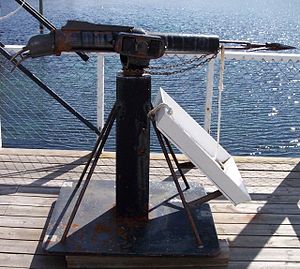 The modern whaling harpoon consists of a deck-mounted launcher (mostly a cannon) and a projectile which is a large harpoon with an explosive (penthrite) charge, attached to a thick rope. The spearhead is shaped in a manner which allows it to penetrate the thick layers of whale blubber and stick in the flesh. It has sharp spikes to prevent the harpoon from sliding out. Thus, by pulling the rope with a motor, the whalers can drag the whale back to their ship.

A recent development in harpoon technology is the hand-held speargun. Divers use the speargun for defense against dangerous marine animals. They are also used for spearing fish. Spearguns may be powered by pressurized gas or with mechanical means like springs or elastic bands.

Harpoons were added to the Philae (spacecraft) to help the probe anchor itself to the surface of comet 67P/Churyumov–Gerasimenko. However the harpoons failed to fire.[13][14]