Harvard Medical School (HMS) is the graduate medical school of Harvard University. It is located in the Longwood Medical Area of the Mission Hill neighborhood of Boston, Massachusetts.

The school has a large and distinguished faculty to support its missions of education, research, and clinical care. These faculty hold appointments in the basic science departments on the HMS Quadrangle, and in the clinical departments located in multiple Harvard-affiliated hospitals and institutions in Boston. There are approximately 2,900 full- and part-time voting faculty members consisting of assistant, associate, and full professors, and over 5,000 full or part-time, non-voting instructors.

The current dean of the medical school is Jeffrey S. Flier, an endocrinologist and the former Chief Academic Officer of the Beth Israel Deaconess Medical Center, who succeeded neurologist Joseph B. Martin, M.D., Ph.D on September 1, 2007.[1] 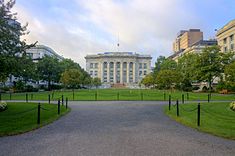 The school is the third-oldest medical school in the United States (after Perelman School of Medicine at the University of Pennsylvania and Columbia University College of Physicians and Surgeons) and was founded by John Warren on September 19, 1782, with Benjamin Waterhouse, and Aaron Dexter. The first lectures were given in the basement of Harvard Hall and then in Holden Chapel. The first class, composed of two students, graduated in 1788.

It moved from Cambridge to 49 Marlborough Street in Boston in 1810. From 1816 to 1846, the school, known as Massachusetts Medical College of Harvard University, was located on Mason Street. In 1847 the school relocated to North Grove Street, and then to Copley Square in 1883.

The school moved to its current location on Longwood Avenue in 1906, where the "Great White Quadrangle" or HMS Quad with its five white marble buildings was established.[2][3] The architect for the campus was the Boston firm of Shepley, Rutan and Coolidge.

Every winter, second year students at HMS write, direct, and perform a full-length musical parody of Harvard, their professors, and themselves. The year 2007 was the centennial performance as the Class of 2009 presented "Joseph Martin and the Amazing Technicolor White Coat"[5] to sellout crowds at Roxbury Community College on February 22, 23, and 24.[6]

Upon matriculation, medical students at Harvard Medical School are divided into five societies named after famous alumni. Each society has a master along with several associate society masters who serve as academic advisors to students.[7] In the New Pathway program, students work in small group tutorials and lab sessions within their societies. Every year, the five societies compete in "Society Olympics" for the famed "Pink Flamingo" trophy in a series of events (e.g., dance-off, dodgeball, limbo contest) that test the unorthodox talents of the students in each society. The most recent champions are London (Class of 2015), London (Class of 2014) and Cannon (Class of 2013). London (HST) has won the competition most frequently.