Hausa (/ˈhaʊsə/)[4] (Yaren Hausa or Harshen Hausa) is the Chadic language (a branch of the Afroasiatic language family) with the largest number of speakers, spoken as a first language by about 35 million people, and as a second language by 15 million in Nigeria, and millions more in other countries, for a total of at least 50 million speakers.[5] Originally the language of the Hausa people stretching across southern Niger and northern Nigeria, it has developed into a lingua franca across much of western Africa for purposes of trade. In the 20th and 21st centuries, it has become more commonly published in print and online.

There are a few traditional dialects, differing mostly due to tonality. The language was commonly written with a variant of the Arabic script known as ajami but is more often written with the Latin alphabet known as boko. 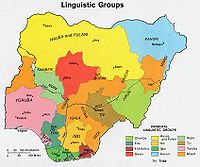 The linguistic groups of Nigeria in 1979

Native speakers of Hausa, the Hausa people, are mostly to be found in Niger, in the north of Nigeria and Chad. Furthermore, the language is used as a trade language across a much larger swathe of West Africa (Benin, Ghana, Cameroon, Togo, Ivory Coast etc.), Central Africa (Chad, Central African Republic, Gabon) and northwestern Sudan, particularly amongst Muslims.

It is taught at universities in Africa and around the world. The language is the most commonly spoken language in Nigeria, but unlike Yoruba and Igbo, it is also widely spoken outside Nigeria, especially in Niger, Ghana, Cameroon and Sudan. Hausa language is in the culture of the United States, with Hausa words used in popular music like the jazz tune, "Frim Fram Sauce". Radio stations like BBC, Radio France Internationale, China Radio International, Voice of Russia, Voice of America, Deutsche Welle, and IRIB broadcast in Hausa.

Western Hausa dialects include Sakkwatanci in Sokoto, Katsinanci in Katsina, Arewanci in Gobir, Adar, Kebbi, and Zamfara, and Kurhwayanci in Kurfey in Niger. Katsina is transitional between Eastern and Western dialects.

Zazzaganci in Zaria is the major Southern dialect.

Northernmost dialects and loss of tonality

The western to eastern Hausa dialects of Kurhwayanci, Daragaram and Aderawa, represent the traditional northernmost limit of native Hausa communities. These are spoken in the northernmost sahel and mid-Saharan regions in west and central Niger in the Tillaberi, Tahoua, Dosso, Maradi, Agadez and Zinder regions. While mutually comprehensible with other dialects (especially Sakkwatanci, and to a lesser extent Gaananci), the northernmost dialects have slight grammatical and lexical differences owing to frequent contact with the Zarma and Tuareg groups and cultural changes owing to the geographical differences between the grassland and desert zones. These dialects also have the quality of being non-tonal or pitch accent dialects.

This link between non-tonality and geographic location is not limited to Hausa alone, but is exhibited in other northern dialects of neighbouring languages; such as the difference within Songhay language (between the non-tonal northernmost dialects of Koyra Chiini in Timbuktu and Koyraboro Senni in Gao; and the tonal southern Zarma dialect, spoken from western Niger to northern Ghana), and within the Soninke language (between the non-tonal northernmost dialects of Imraguen and Nemadi spoken in east-central Mauritania; and the tonal southern dialects of Senegal, Mali and the sahel).

The Zaria Hausa dialect (Gaananci), spoken in Ghana, Togo, and western Ivory Coast, is a distinct western native Hausa dialect-bloc with adequate linguistic and media resources available. Separate smaller Hausa dialects are spoken by an unknown number of Hausa further west in parts of Burkina Faso, and in the Haoussa Foulane, Badji Haoussa, Guezou Haoussa, and Ansongo districts of northeastern Mali (where it is designated as a minority language by the Malian government), but there are very little linguistic resources and research done on these particular dialects at this time.

Gaananci forms a separate group from other Western Hausa dialects, as it now falls outside the contiguous Hausa-dominant area, and is usually identified by the use of c for ky, and j for gy. This is attributed to the fact that Ghana's Hausa population descend from Hausa-Fulani traders settled in the zongo districts of major trade-towns up and down the previous Asante, Gonja and Dagomba kingdoms stretching from the sahel to coastal regions, in particular the cities of Tamale, Salaga, Bawku, Bolgatanga, Achimota, Nima and Kumasi.

Gaananci exhibits noted inflected influences from Zarma, Gur, Dyula and Soninke, as Ghana is the westernmost area in which the Hausa language is a major lingua-franca; as well as it being the westernmost area both the Hausa and Djerma ethnic groups inhabit in large numbers. Immediately west from Ghana (in Ivory Coast, Togo, and Burkina Faso), Hausa is abruptly replaced with Dioula–Bambara as the main lingua-franca of what become predominantly Mandinka areas, and native Hausa populations plummet to a very small urban minority.

Because of this, and the presence of surrounding Akan, Gur and Mande languages, Gaananci was historically isolated from the other Hausa dialects.[6] Despite this difference, grammatical similarities between Sakkwatanci and Ghanaian Hausa determine that the dialect, and the origin of the Ghanaian Hausa people themselves, are derived from the northwestern Hausa area surrounding Sokoto.[7]

Hausa is also widely spoken by non-native Gur and Mande Ghanaian Muslims, but differs from Gaananci, and rather has features consistent with non-native Hausa dialects.

Hausa is also spoken various parts of Cameroon and Chad, which combined the mixed dialects of northern Nigeria and Niger. In addition, Arabic has had a great influence in the way Hausa is spoken by the native Hausa speakers in these areas.

In West Africa, Hausa's use as a lingua franca has given rise to non-native pronunciation that differs vastly from native pronunciation by way of key omissions of implosive and ejective consonants present in native Hausa dialects, such as ɗ, ɓ and kʼ/ƙ, which are pronounced by non-native speakers as d, b and k respectively. This creates confusion among non-native and native Hausa speakers, as non-native pronunciation does not distinguish words like daidai ("correct") and ɗaiɗai ("one-by-one"). Another difference between native and non-native Hausa is the omission of vowel length in words and change in the standard tone of native Hausa dialects (ranging from native Fulani and Tuareg Hausa-speakers omitting tone altogether, to Hausa speakers with Gur or Yoruba mother tongues using additional tonal structures similar to those used in their native languages). Use of masculine and feminine gender nouns and sentence structure are usually omitted or interchanged, and many native Hausa nouns and verbs are substituted with non-native terms from local languages.

Non-native speakers of Hausa numbered more than 25 million and, in some areas, live close to native Hausa. It has replaced many other languages especially in the north-central and north-eastern part of Nigeria and continues to gain popularity in other parts of Africa as a result of Hausa movies and musics which spread out throughout the region.

There are several pidgin forms of Hausa. Barikanchi was formerly used in the colonial army of Nigeria. Gibanawa is currently in widespread use in Jega in northwestern Nigeria, south of the native Hausa area.[8]

Hausa has between 23 and 25 consonant phonemes depending on the speaker.

Hausa has glottalic consonants (implosives and ejectives) at four or five places of articulation (depending on the dialect). They require movement of the glottis during pronunciation and have a staccato sound.

They are written with modified versions of Latin letters. They can also be denoted with an apostrophe, either before or after depending on the letter, as shown below.

Hausa has five phonetic vowel sounds, which can be either short or long, giving a total of 10 monophthongs. In addition, there are four joint vowels (diphthongs), giving a total number of 14 vowel phonemes.

Hausa is a tonal language. Each of its five vowels may have low tone, high tone or falling tone. In standard written Hausa, tone is not marked. In recent linguistic and pedagogical materials, tone is marked by means of diacritics.

An acute accent (´) may be used for high tone, but the usual practice is to leave high tone unmarked.

Hausa's modern official orthography is a Latin-based alphabet called boko, which was introduced in the 1930s by the British colonial administration.

The letter ƴ (y with a right hook) is used only in Niger; in Nigeria it is written ʼy.

Tone, vowel length, and the distinction between /r/ and /ɽ/ (which does not exist for all speakers) are not marked in writing. So, for example, /daɡa/ "from" and /daːɡaː/ "battle" are both written daga.

Hausa has also been written in ajami, an Arabic alphabet, since the early 17th century. There is no standard system of using ajami, and different writers may use letters with different values. Short vowels are written regularly with the help of vowel marks, which are seldom used in Arabic texts other than the Quran. Many medieval Hausa manuscripts in ajami, similar to the Timbuktu Manuscripts, have been discovered recently; some of them even describe constellations and calendars.[12]

In the following table, vowels are shown with the Arabic letter for t (ت) as an example.

Hausa is one of three indigenous languages of Nigeria which has been rendered in braille.

At least three other writing systems for Hausa have been proposed or "discovered." None of these are in active use beyond perhaps some individuals.