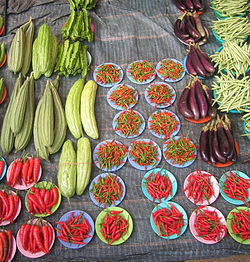 Organic vegetables at a farmers' market in Argentina

A health food store is a type of grocery store that primarily sells health foods, organic foods, local produce, and often nutritional supplements. Health food stores typically offer a wider or more specialized selection of foods than conventional grocery stores for their customers, for example athletes and bodybuilders, people with special dietary needs, such as people who are allergic to the gluten in wheat or some other substance, or have diabetes mellitus, and for people who observe vegetarian, vegan, raw food, organic, or other alternative diets.

The term health food has been used since the 1920s to refer to specific foods claimed to be especially beneficial to health, although the term has no official definition. Some terms that are associated with health food are macrobiotics, natural foods, organic foods and whole foods. Macrobiotics is a diet focusing primarily on whole cereals. Whole cereals, along with other whole foods, are foods that are minimally processed. Whole cereals have their fiber, germ and hull intact and are considered more nutritious. Natural foods are simply foods that contain no artificial ingredients. Organic foods are foods that are grown without the use of conventional and artificial pesticides and must meet certain organic standards. 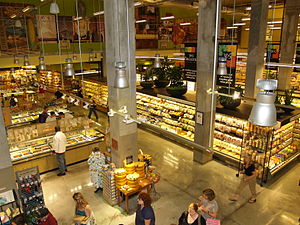 Many foods which are now commonplace in groceries first entered the market in the late 19th and early 20th centuries. Efforts by early health pioneers such as Paul Bragg, Sylvester Graham, John Harvey Kellogg, George Ohsawa, Ellen White and others spurred an interest in health food. As early as the 1920s and 1930s health food stores started opening in the United States and the United Kingdom selling products such as blackstrap molasses and brewer's yeast.

One early health food store was founded by Thomas Martindale in 1869 as "Thomas Martindale Company" in Oil City, Pennsylvania. In 1875 Thomas Martindale moved the store to Philadelphia.[1] It is known as the oldest health food store in the United States and is still independently owned. The Martindale family eventually moved the store to 10th and Filbert St. in 1920 and was heavily influenced by the new interest in health and wellness in the 1930s. The store manufactured their own coffee substitute made from dried figs called "Figco". Healthy foods were sold in the lunchroom, with all baked goods being sweetened with honey or maple syrup. Eventually the store evolved into what is known as Martindale's Natural Market which is still in existence today.[2]

In 1896 a new building was built in Birmingham, England to house James Henry Cook's vegetarian restaurant, one of the first in England. In 1898, 'The Pitman Vegetarian Hotel', named after the famous vegetarian Sir Isaac Pitman, opened on the same site, and the proprietors subsequently opened a long-running health food store.

Frank A. Sawall, who earlier worked with John Harvey Kellogg, began selling powdered mineral drinks door to door and lecturing around the United States on the benefits of vitamin and mineral supplements, before opening Sawall Health Food Products, Inc., in 1936, the United States' oldest family-owned natural foods store still in existence today. It began with powdered minerals and vitamins and also sold natural and organic foods. Frank A. Sawall, a bio-chemist, was described as "America's Outstanding Health Teacher and Nationally known Nutritionist" in newspapers across the United States. He lectured extensively across the Midwest and the East Coast. Frank A. Sawall, expanded his stores in Michigan, including Detroit, Kalamazoo, Bay City, Grand Rapids, and Lansing. Creating the first health foods store chain in the United States. Sawall Health Foods is now in its fifth generation of Sawall's working at the business and is the oldest family-owned natural foods store in the United States.

The Proxmire Vitamin Bill of 1976 that kept the FDA from defining food supplements as "drugs" was hailed as a great achievement in the health foods industry at the time. Senator William Proxmire was married to Ellen Hodges Sawall.

The New Westminster store operated by Health Food Research, opened in 1954 on the outskirts of Vancouver, British Columbia. It was founded by Ella Birzneck, and modeled partly upon Russian "doctors' shops", which carried medicines, herbs, and special foods.

Health food stores became much more common in the 1960s in connection to the newly emerging ecology movement and counterculture.[3]

Many health food stores are worker owned cooperatives and consumer cooperatives due in part to the ability of cooperative buying power to bring lower costs to the consumer and their growth of popularity during the counterculture movement of the 1960s and 1970s.

Over the last decade, health food, and especially organic food, has entered the mainstream. Companies such as Whole Foods Market, a large multinational corporation, have profited greatly and grown substantially during this expansion.