Eberbach was born on 24 November 1895 in Stuttgart, at the time the capital of the Kingdom of Württemberg in the German Empire. His father, a merchant, died when he was six years old. Subsequently his mother raised him and the other four children by herself. From Easter 1911 onwards, Eberbach attended the Oberrealschule, a secondary school, in Stuttgart and graduated with his Abitur (diploma) on 30 June 1914.[1] During late 1914 Eberbach fought in France as a corporal, and by February 1915 he was promoted to Lieutenant. During 1915 he was wounded twice in France, lost his nose due to a French bullet (a rubber replacement was made) and was captured by the French. In December 1916 he was exchanged for a French prisoner and by 1918 he was posted to Palestine. As he spoke the Turkish language, he served on the staff of the Turkish Eighth Army.

During the 1920s Eberbach was an officer in the civilian police in Württemberg and in 1935 joined the German army (Heer). In 1937 he was promoted to Oberstleutnant and in 1938 be became commander of Panzer-Regiment 35, part of the newly formed 4.Panzer-Division under Generalmajor Georg-Hans Reinhardt in Bamberg.

Eberbach participated in the German Invasion of Poland in September 1939 by leading his Panzer-Regiment 35 into battles near Łódź and into Warsaw.

In 1940, he commanded Panzer-Regiment 35 in the Battle of France. His force supported General Manteuffel's offensive across the Meuse River in May; in June they swept across France to Lyon.

Eberbach was still in command of Panzer-Regiment 35 at the start of the June 1941 invasion of the Soviet Union, being promoted six weeks later to commander of the 5.Panzer-Brigade in Generaloberst Guderian's XXIV.Panzer-Korps. By March 1942 he had been promoted to Major General and made commander of the 4.Panzer-Division, in the German lines opposite the Russian town of Sukhinichi, roughly 120 miles west of Tula. 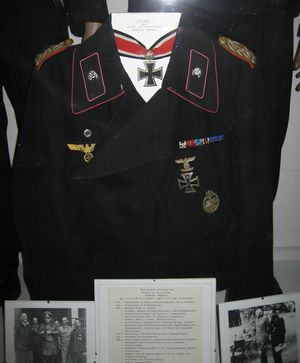 In late November 1942 Eberbach was appointed commander of the XLVIII.Panzer-Korps, the battered armored formation that had just been overrun and pushed aside in the initial days of Operation Uranus. Eberbach was soon wounded and evacuated, remaining hospitalized until February. He then became Inspector of the Armored Troops in the Home Army, was awarded the Knight's Cross of the Iron Cross and promoted to Lieutenant General.

In November 1943 Eberbach became commander of troops around Nikopol and fought in battles around Zhitomir in the Soviet Union. In December he incurred a kidney illness and was later made Inspector of Panzer Troops.

In early 1944 Eberbach was promoted to the rank of General der Panzertruppen. During the Normandy invasion, he fought against the British landings along the 'Juno' and 'Sword' beaches. On 2 July he took command of "Panzer Group West" (5th Panzer Army) when Leo Geyr von Schweppenburg was wounded. On 9 August, this force was divided, with 5th Panzer Army retreating with the most damaged units; the effective units were reorganized as Panzergruppe Eberbach.

Eberbach was directed to lead this force in the counterattack through Mortain toward Avranches that was intended to cut off the Allied forces which had broken out of Normandy. He had no confidence in this attack.

"On or about 1 Aug 44, Gen Warlimont, of OKW, arrived at my headquarters to get a closer view of the situation ... I told him I considered it [the Mortain attack] hopeless because enemy air forces would soon stop the attack ... I further said that in my opinion the only possible solution was an immediate retreat to the Seine-Yonne line."[2] However, Warlimont denied Eberbach's request to withdraw, and instead confirmed the order to attack.

The attack failed, and most of Panzergruppe Eberbach and 7.Armee was surrounded and destroyed in the Falaise Pocket. Eberbach escaped and was given command of the remnants of 7.Armee on 21 August. On 31 August while out on a reconnaissance patrol, Eberbach was captured by British troops at Amiens. 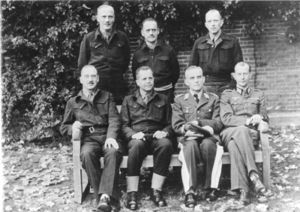 Eberbach was held in a prisoner-of-war camp until 1948 and shortly thereafter he became the director of a Protestant charity. During the early 1950s he was active in advising on the redevelopment of the German army: Bundeswehr (see Searle's Wehrmacht Generals).