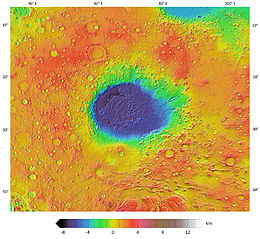 Topographic map of Hellas Planitia and its surroundings in the southern uplands, from the MOLA instrument of Mars Global Surveyor. The crater depth is 7,152 m (23,465 ft) below the standard topographic datum of Mars.[1] 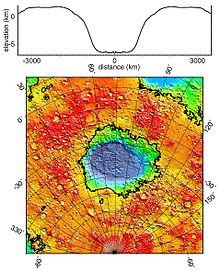 This elevation map shows the surrounding elevated ring of ejecta

Hellas Planitia is a plain located within the huge, roughly circular impact basin Hellas[lower-alpha 1] located in the southern hemisphere of the planet Mars.[3] Hellas is the second or third largest impact crater and the largest visible impact crater known in the Solar System. The basin floor is about 7,152 m (23,465 ft) deep, 3,000 m (9,800 ft) deeper than the Moon's South Pole-Aitken basin, and extends about 2,300 km (1,400 mi) east to west.[4][5] It is centered at Lua error in Module:Coordinates at line 668: callParserFunction: function "#coordinates" was not found. Hellas Planitia is in the Hellas quadrangle and the Noachis quadrangle.

With a diameter of about 2,300 km (1,400 mi),[6] it is the largest unambiguous impact structure on the planet, though a distant second if the Borealis Basin proves to be an impact crater. Hellas Planitia is thought to have been formed during the Late Heavy Bombardment period of the Solar System, approximately 4.1 to 3.8 billion years ago, when a large asteroid hit the surface.[7]

The altitude difference between the rim and the bottom is 9,000 m (30,000 ft). The depth of the crater (7,152 m (23,465 ft)[1] ( 7,000 m (23,000 ft)) below the standard topographic datum of Mars) explains the atmospheric pressure at the bottom: 12.4 mbar (0.012 bar) during the northern summer .[8] This is 103% higher than the pressure at the topographical datum (610 Pa, or 6.1 mbar or 0.09 psi) and above the triple point of water, suggesting that the liquid phase could be present under certain conditions of temperature, pressure, and dissolved salt content.[9] It has been theorized that a combination of glacial action and explosive boiling may be responsible for gully features in the crater.

Some of the low elevation outflow channels extend into Hellas from the volcanic Hadriacus Mons complex to the northeast, two of which Mars Orbiter Camera images show contain gullies: Dao Vallis and Reull Vallis. These gullies are also low enough for liquid water to be transient around Martian noon, if the temperature would rise above 0 Celsius.[10]

Due to its size and its light coloring, which contrasts with the rest of the planet, Hellas Planitia was one of the first Martian features discovered from Earth by telescope. Before Giovanni Schiaparelli gave it the name Hellas (which in Greek means 'Greece'), it was known as 'Lockyer Land', having been named by Richard Anthony Proctor in 1867 in honor of Sir Joseph Norman Lockyer, an English astronomer who, using a 16 cm (6.3 in) refractor, produced "the first really truthful representation of the planet" (in the estimation of E. M. Antoniadi).[14]

Tongue-shaped glacier in Hellas Planitia. Ice may still exist there beneath an insulating layer of soil.

Close-up of glacier with a resolution of about 1 meter. The patterned ground is believed to be caused by the presence of ice.

Radar images by the Mars Reconnaissance Orbiter (MRO) spacecraft's SHARAD radar sounder suggest that features called lobate debris aprons in three craters in the eastern region of Hellas Planitia are actually glaciers of water ice lying buried beneath layers of dirt and rock.[15] The buried ice in these craters as measured by SHARAD is about 250 m (820 ft) thick on the upper crater and about 300 m (980 ft) and 450 m (1,480 ft) on the middle and lower levels respectively. Scientists believe that snow and ice accumulated on higher topography, flowed downhill, and is now protected from sublimation by a layer of rock debris and dust. Furrows and ridges on the surface were caused by deforming ice.

Also, the shapes of many features in Hellas Planitia and other parts of Mars are strongly suggestive of glaciers, as the surface looks as if movement has taken place.