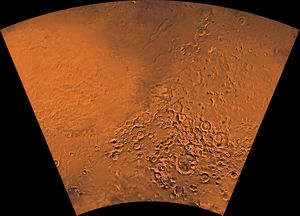 The Hellas quadrangle contains part of the Hellas Basin, the largest known impact crater on the surface of Mars and the second largest in the solar system. The depth of the crater is 7152 m[5] (23,000 ft) below the standard topographic datum of Mars. The basin is located in the southern highlands of Mars and is thought to have been formed about 3.9 billion years ago, during the Late Heavy Bombardment. Studies suggest that when an impact created the Hellas Basin, the entire surface of Mars was heated hundreds of degrees, 70 meters of molted rock fell on the planet, and an atmosphere of gaseous rock was formed. This rock atmosphere was 10 times as thick as the Earth's atmosphere. In a few days, the rock would have condensed out and covered the whole planet with an additional 10 m of molten rock.[2] In the Northwest portion of Hellas Planitia is a strange type of surface called complex banded terrain or taffy-pull terrain. Its process of formation is still largely unknown, although it appears to be due to erosion of hard and soft sediment along with ductile deformation. Ductile deformation results from layers undergoing strain.[6]

Early in the planet's history, it is believed that a giant lake existed in the Hellas Basin.[7] Possible shorelines have been discovered. These are evident in alternating benches and scarps visible in Mars orbiting camera narrow-angle images. In addition, Mars orbiting laser altimeter (MOLA) data show that the contacts of these sedimentary units mark contours of constant elevation for thousands of km, and in one case all around the basin. Channels, believed to be formed by water, enter into the basin. The Hellas drainage basin may be almost one-fifth that of the entire northern plains. A lake in Hellas in today's Martian climate would form a thick ice at the top that would eventually sublimate away. That is the ice would turn directly from a solid to a gas. This is similar to how dry ice (solid carbon dioxide) behaves on Earth.[3] Glacial features (terminal moraines, drumlins, and eskers) have been found that may have been formed when the water froze.[2][8]

One very important feature common in east Hellas are piles of material surrounding cliffs. The formation is called a lobate debris apron (LDA). Recently, research with the Shallow Radar on the Mars Reconnaissance Orbiter has provided strong evidence that the LDAs are glaciers that are covered with a thin layer of rocks.[9][10][11][12][13] Large amounts of water ice are believed to be in the LDAs. Available evidence strongly suggests that the eastern part of Hellas accumulated snow in the past. When the tilt (obliquity) of Mars increases the southern ice cap releases large amounts of water vapor. Climate models predict that when this occurs, water vapor condenses and falls where LDAs are located. The tilt of the earth changes little because our relatively large moon keeps it stable. The two tiny Martian moons do not stabilize their planet, so the rotational axis of Mars undergoes large variations.[14] Lobate debris aprons may be a major source of water for future Mars colonists. Their major advantage over other sources of Martian water are that they can easily mapped from orbit and they are closer to the equator, where manned missions are more likely to land.

On the floors of some channels are features called lineated floor deposits. They are ridged and grooved materials that seem to deflect around obstacles. They are believed to be ice-rich. Some glaciers on the Earth show such features. Lineated floor deposits may be related to lobate debris aprons, which have been proven to contain large amounts of ice. Reull Vallis, as pictured below, displays these deposits.[15]

File:Niger Vallis hirise.JPG
Niger Vallis with features typical of this latitude, as seen by HiRISE. Chevron patterns result from movement of ice-rich material. Click on image to see chevron pattern and mantle

Much of the surface of Mars is covered by a thick smooth mantle that is thought to be a mixture of ice and dust. This ice-rich mantle, a few yards thick, smoothes the land, but in places it displays a bumpy texture, resembling the surface of a basketball. Because there are few craters on this mantle, the mantle is relatively young. The image at the right shows a good view of this smooth mantle around Niger Vallis, as observed with HiRISE. Changes in Mars's orbit and tilt cause significant changes in the distribution of water ice from polar regions down to latitudes equivalent to Texas. During certain climate periods water vapor leaves polar ice and enters the atmosphere. The water returns to the ground at lower latitudes as deposits of frost or snow mixed generously with dust. The atmosphere of Mars contains a great deal of fine dust particles. Water vapor condenses on the particles, then they fall down to the ground due to the additional weight of the water coating. When ice at the top of the mantling layer goes back into the atmosphere, it leaves behind dust, which insulates the remaining ice.[16]

Remnants of a 50-100 meter thick mantling, called the upper plains unit, has been discovered in the mid-latitudes of Mars. First investigated in the Deuteronilus Mensae region, but it occurs in other places as well. The remnants consist of sets of dipping layers in craters and along mesas.[17] Sets of dipping layers may be of various sizes and shapes—some look like Aztec pyramids from Central America.

This unit also degrades into brain terrain. Brain terrain is a region of maze-like ridges 3–5 meters high. Some ridges may consist of an ice core, so they may be sources of water for future colonists.

Some regions of the upper plains unit display large fractures and troughs with raised rims; such regions are called ribbed upper plains. Fractures are believed to have started with small cracks from stresses. Stress is suggested to initiate the fracture process since ribbed upper plains are common when debris aprons come together or near the edge of debris aprons—such sites would generate compressional stresses. Cracks exposed more surfaces, and consequently more ice in the material sublimates into the planet’s thin atmosphere. Eventually, small cracks become large canyons or troughs. Small cracks often contain small pits and chains of pits; these are thought to be from sublimation of ice in the ground.[18][19] Large areas of the Martian surface are loaded with ice that is protected by a meters thick layer of dust and other material. However, if cracks appear, a fresh surface will expose ice to the thin atmosphere.[20][21] In a short time, the ice will disappear into the cold, thin atmosphere in a process called sublimation. Dry ice behaves in a similar fashion on the Earth. On Mars sublimation has been observed when the Phoenix lander uncovered chunks of ice that disappeared in a few days.[22][23] In addition, HiRISE has seen fresh craters with ice at the bottom. After a time, HiRISE saw the ice deposit disappear.[24]

The upper plains unit is thought to have fallen from the sky. It drapes various surfaces, as if it fell evenly. As is the case for other mantle deposits, the upper plains unit has layers, is fine-grained, and is ice-rich. It is widespread; it does not seem to have a point source. The surface appearance of some regions of Mars is due to how this unit has degraded. It is a major cause of the surface appearance of lobate debris aprons.[19] The layering of the upper plains mantling unit and other mantling units are believed to be caused by major changes in the planet's climate. Models predict that the obliquity or tilt of the rotational axis has varied from its present 25 degrees to maybe over 80 degrees over geological time. Periods of high tilt will cause the ice in the polar caps to be redistributed and change the amount of dust in the atmosphere.[25][26][27]

Studies have shown that when the tilt of Mars reaches 45 degrees from its current 25 degrees, ice is no longer stable at the poles.[30] Furthermore, at this high tilt, stores of solid carbon dioxide (dry ice) sublimate, thereby increasing the atmospheric pressure. This increased pressure allows more dust to be held in the atmosphere. Moisture in the atmosphere will fall as snow or as ice frozen onto dust grains. Calculations suggest this material will concentrate in the mid-latitudes.[31][32] General circulation models of the Martian atmosphere predict accumulations of ice-rich dust in the same areas where ice-rich features are found.[33] When the tilt begins to return to lower values, the ice sublimates (turns directly to a gas) and leaves behind a lag of dust.[34][34][35] The lag deposit caps the underlying material so with each cycle of high tilt levels, some ice-rich mantle remains behind.[36] Note, that the smooth surface mantle layer probably represents only relative recent material. 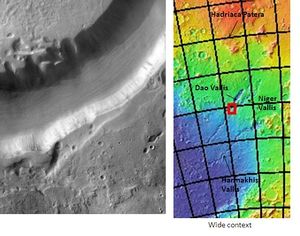 Dao Vallis, as seen by THEMIS. Click on image to see relationship of Dao Vallis to other nearby features

Dao Vallis begins near a large volcano, called Hadriaca Patera, so it is thought to have received water when hot magma melted huge amounts of ice in the frozen ground.[2] The partially circular depressions on the left side of the channel in the image to the right suggests that groundwater sapping also contributed water.[37]

Many areas on Mars, including the Hellas quadrangle, experience the passage of giant dust devils. A thin coating of fine bright dust covers most of the martian surface. When a dust devil goes by it blows away the coating and exposes the underlying dark surface. Dust devils have been seen from the ground and from orbiting spacecraft. They have even blown the dust off of the solar panels of the two Rovers on Mars, thereby greatly extending their lives.[38] The twin Rovers were designed to last for 3 months, instead they have lasted more than five years and are still going. The pattern of the tracks have been shown to change every few months.[39] A study that combined data from the High Resolution Stereo Camera (HRSC) and the Mars Orbiter Camera (MOC) found that some large dust devils on Mars have a diameter of 700 meters and last at least 26 minutes.[40]

The Mars Reconnaissance Orbiter discovered changes on the wall of Penticton Crater between 1999 and 2004. One interpretation of the changes was that they were caused by water flowing on the surface.[41] A further analysis, published about a year later, revealed that the deposit could have been caused by gravity moving material down slope (a landslide). The slope where the deposit was sighted was close to the stability limits of dry, unconsolidated materials.[42]

Impact craters generally have a rim with ejecta around them, in contrast volcanic craters usually do not have a rim or ejecta deposits. As craters get larger (greater than 10 km in diameter) they usually have a central peak.[43] The peak is caused by a rebound of the crater floor following the impact.[44] Sometimes craters will display layers. Craters can show us what lies deep under the surface.