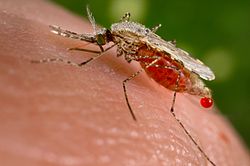 An Anopheles stephensi mosquito obtaining a blood meal from a human host through its pointed proboscis. Note the droplet of blood being expelled from the abdomen after having engorged itself on its host’s blood. This mosquito is a malarial vector with a distribution that ranges from Egypt to China. 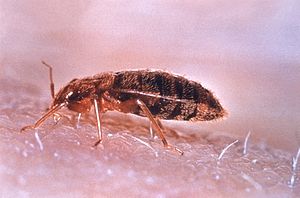 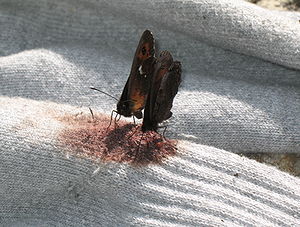 Hematophagy (sometimes spelled haematophagy or hematophagia) is the practice of certain animals of feeding on blood (from the Greek words αἷμα haima "blood" and φάγειν phagein "to eat"). Since blood is a fluid tissue rich in nutritious proteins and lipids that can be taken without enormous effort, hematophagy has evolved as a preferred form of feeding in many small animals such as worms and arthropods. Some intestinal nematodes, such as Ancylostomids, feed on blood extracted from the capillaries of the gut and about 75 percent of all species of leeches (e.g. Hirudo medicinalis), a free-living worm, are hematophagous. Some fish, such as lampreys and candirus, and mammals, especially the vampire bats, and birds, such as the vampire finches, hood mockingbirds, the Tristan thrush and oxpeckers, also practise hematophagy.

These hematophagous animals have mouth parts and chemical agents for penetrating vascular structures in the skin of hosts, mostly of mammals, birds, and fish. This type of feeding is known as phlebotomy (from the Greek words, phleps "vein" and tomos "cutting").

Once phlebotomy is performed (in most insects by a specialized fine hollow "needle," the proboscis, which perforates skin and capillaries; in bats by sharp incisor teeth that act as a razor to cut the skin), blood is acquired either by sucking action directly from the veins or capillaries, from a pool of escaped blood, or by lapping (again, in bats). In order to overcome natural hemostasis (blood coagulation), vasoconstriction, inflammation, and pain sensation in the host, biochemical solutions in the saliva for instance, for pre-injection, anesthesia and capillary dilation have evolved in different hematophagous species. Anticoagulant medicines have been developed on the basis of substances found in the saliva of several hematophagous species such as leeches (hirudin).

Hematophagy can be classified into obligatory and optional practice. Obligatory hematophagous animals do not have any other type of food besides blood; one such species is Rhodnius prolixus (an assassin bug from South America). This contrasts with optional hematophages, like the many mosquitoes species, such as Aedes aegypti, which may also feed on pollen, fruit juice, and other biological fluids. Sometimes only the female of the species is a hematophage (this is essential for egg production and reproduction).

Hematophagy has apparently evolved independently in many disparate arthropod, annelid, nematode and mammalian taxa. For example, Diptera (insects with two wings, such as flies) have eleven families with hematophagous habits (more than half of the 19 hematophagous arthropod taxa). About 14,000 species of arthropods are hematophagous, even including some genera that were not previously thought to be, such as moths of the genus Calyptra. Several complementary biological adaptations for locating the hosts (usually in the dark, as most hematophagous species are nocturnal and silent, in order to avoid detection and destruction by the host) have also evolved, such as special physical or chemical detectors (for sweat components, CO2, heat, light, movement, etc.).

Insects and arachnids of medical importance for being hematophagous, at least in some species, include the sandfly, blackfly, tsetse fly, bedbug, assassin bug, mosquito, tick, louse, mite, midge, and flea.

Hematophagous organisms have been used by physicians for beneficial purposes (hirudotherapy). Some doctors now use leeches to prevent the clotting of blood on some wounds following surgery or trauma.[citation needed] The anticoagulants in the laboratory-raised leeches' saliva keeps fresh blood flowing to the site of an injury, actually preventing infection and increasing chances of full recovery. In a recent study a genetically engineered drug called desmoteplase based on the saliva of Desmodus rotundus (the vampire bat) was shown to improve recovery in stroke patients.[citation needed]

Drinking blood and manufacturing foodstuffs and delicacies with animal blood is also a feeding behavior in many societies. Cow blood mixed with milk, for example, is a mainstay food of the African Maasai. Marco Polo reported that Mongols would drink blood from one of their horses if it became a necessity. Black pudding is eaten in many places around the world. Some societies, such as the Moche, had ritual hematophagy, as well as the Scythians, a nomadic people of Russia, who had the habit of drinking the blood of the first enemy they would kill in battle. Some religious rituals and symbols seemingly mirror hematophagy, such as in the transubstantiation of wine as the blood of Jesus Christ during Christian eucharist. Psychiatric cases of patients performing hematophagy also exist. Sucking or licking one's own blood from a wound is also a behavior commonly seen in humans, and in small enough quantities is not considered taboo. Finally, human vampirism has been a persistent object of literary and cultural attention.