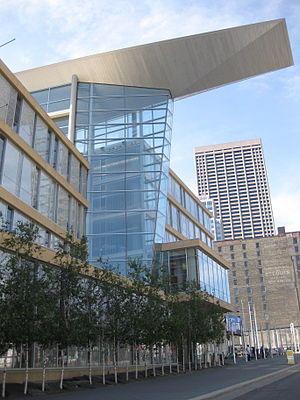 The Minneapolis Central Library in downtown Minneapolis, designed by César Pelli, completed in 2006 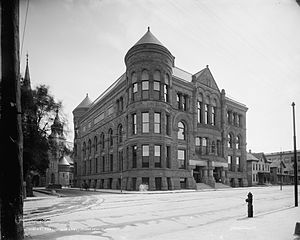 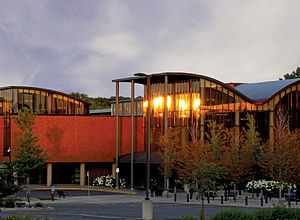 Hennepin County Library started in 1922 as a horse-drawn "bookmobile" to areas outside the core city of Minneapolis. The system saw a large increase in use in the period between 1950 and 1980 as more people moved into suburban areas of the county. By 1952 there were 24 libraries in the system, additional city libraries such as Hopkins, were incorporated into the county system. Hennepin County Library opened its first area library, Southdale, in 1973. In the early 1970s plans were in place to merge the Minneapolis Public Library with the HCL, however the Minneapolis library system reconsidered and merger plans were put on hold.[4] Ultimately the two library systems reached an agreement and the merger was finalized on January 1, 2008 under the name of Hennepin County Library.[5]

The Hennepin County Free Library started operating a bookmobile (then called a book wagon) in 1923. Residents did not use library cards, but were rather issued Walleye which were engraved with a special serial number to identify members of the library.[6]