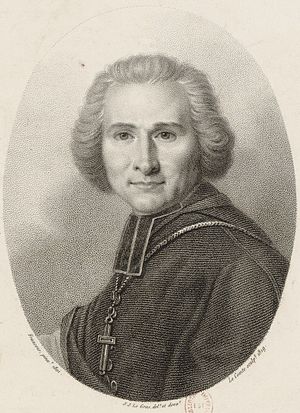 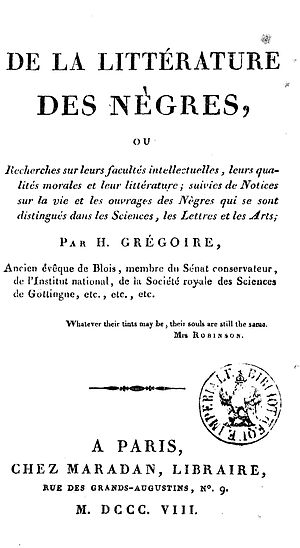 Henri Grégoire (French: [ɑ̃ʁi ɡʁeɡwaʁ]; 4 December 1750 – 28 May 1831), often referred to as Abbé Grégoire, was a French Roman Catholic priest, constitutional bishop of Blois and a revolutionary leader. He was an ardent abolitionist and supporter of universal suffrage, and was a founding member of the Bureau des longitudes, the Institut de France, and the Conservatoire national des arts et métiers.

Grégoire was born at Vého near Lunéville, the son of a tailor. Educated at the Jesuit college at Nancy, he became curé (parish priest) of Emberménil in 1782. In 1783 he was crowned by the Academy of Nancy for his Eloge de la poésie, and in 1788 by that of Metz for an Essai sur la régénération physique et morale des Juifs.

He was elected in 1789 by the clergy of the bailliage of Nancy to the Estates-General, where he soon made his name as one of the group of clerical and lay deputies of Jansenist or Gallican sympathies who supported the Revolution. He was one of the first of the clergy to join the third estate, and contributed notably to the union of the three orders; he presided at the session that lasted sixty-two hours while the Bastille was being attacked by the people, and spoke vehemently against the enemies of the nation. He later took a leading role in the abolition of the privileges of the nobles and the Church.

Under the new Civil Constitution of the Clergy, to which he was the first priest to take the oath (27 December 1790), he was elected bishop by two départements. He selected that of Loir-et-Cher, taking the old title of bishop of Blois, and for ten years (1791–1801) ruled his diocese with exemplary zeal. An ardent republican, he strongly supported Collot d'Herbois' motion for the abolition of the monarchy in the first session of the National Convention (21 September 1792) with the memorable phrase "Kings are in morality what monsters are in the world of nature.".[1]

On 15 November he delivered a speech in which he demanded that King Louis XVI should be brought to trial, and immediately afterwards was elected president of the Convention, over which he presided in his episcopal dress. During the trial, being absent with other three colleagues on a mission for the union of Savoy to France, he along with them wrote a letter urging the condemnation of the king, but attempted to save the life of the monarch by proposing that the death penalty should be suspended.

When, on 7 November 1793, Jean-Baptiste-Joseph Gobel, bishop of Paris, was intimidated into resigning his episcopal office at the bar of the Convention, Grégoire, who was temporarily absent, hearing what had happened, faced the indignation of many deputies, refusing to give up either his religion or his office. This display of courage ultimately saved him from the guillotine.

Throughout the Reign of Terror, in spite of attacks in the Convention, in the press, and on placards posted at the street corners, he appeared in the streets in his episcopal dress and daily said Mass in his house. After Maximilien Robespierre's fall (the Thermidor), he acquired Robespierre's house in the rue Bonaparte from where he continued this practise. He was then the first to advocate the reopening of the churches (speech of 21 December 1794).

Grégoire also coined the term vandalism in reference to the destruction of property that occurred during the Revolution, both that which was ordered by the National Convention and that which occurred at the hands of the French people. In a series of three reports issues to the National Convention in 1794, Grégoire advocated for additional protection of art works, architecture, inscriptions, books, and manuscripts. He is credited by scholars, such as Joseph Sax and Stanley Izerda as one of the founders of the idea of preservation of cultural objects.

In October 1789, Grégoire took a great interest in abolitionism, after meeting Julien Raimond, a free colored planter from Saint-Domingue who was trying to win admission to the Constituent Assembly as a representative of his group. He published numerous pamphlets and later, books, on the subject of racial equality, and became an influential member of the Society of the Friends of the Blacks. It was on Grégoire's motion in May 1791 that the Constituent Assembly passed its first law admitting some wealthy free men of colour in the French colonies to the same rights as whites. In addition, Gregoire was considered a friend of the Jews. He argued that in the French society, the supposed degeneracy of Jews was not inherent, but rather a result of their circumstances. He blamed the way the Jews had been treated, persecution by Christians, and the "ridiculous" teachings of their rabbis, for their condition, and believed they could be brought into mainstream society and made citizens.[citation needed]

Annihilating the dialects of France

Abbé Grégoire is also known for advocating a single French national language, and for writing Rapport sur la Nécessité et les Moyens d'anéantir les Patois et d'universaliser l'Usage de la Langue française (Report on the necessity and means to annihilate the patois and to universalise the use of the French language),[2] which he presented on 4 June 1794 to the National Convention.[3] According to his own research, a vast majority of people in France spoke one of 33 dialects or patois and he argued that French had to be imposed on the population and all other dialects eradicated. According to his classification, which was not necessarily reliable, Corsican and Alsatian were described as "highly degenerate" (très-dégénérés) forms of Italian and German while Occitan was decomposed into a variety of syntactically loose local remnants of the language of troubadours with no intelligibility among them, and had to be abandoned in favour of the language of the capital. This, coupled with Jules Ferry's policy less than a century later, led to the weakening of most unofficial languages in France, all of them being subsequently banned from public documents, administration and school. One effect of this was that non-French speakers often came to feel ashamed of their home languages through official exclusion, humiliation at school and rejection from the media as organized and sanctioned by French political leaders (see Vergonha).

After the establishment of the Directory in 1795, Grégoire was elected to the Council of Five Hundred. After Napoleon Bonaparte took power in 1799 he became a member of the Corps Législatif, then of the Senate (1801). He took the lead in the national church councils of 1797 and 1801; but he was strenuously opposed to Napoleon Bonaparte's policy of reconciliation with the Holy See, and after the signature of the concordat he resigned his bishopric on 8 October 1801.

He was one of the minority of five in the Senate who voted against the proclamation of the French Empire, and he opposed the creation of a new French nobility and Napoleon's divorce from Joséphine de Beauharnais. Notwithstanding this, he was created a Count and officer of the Légion d'honneur.[4] During the later years of Napoleon's reign he travelled to England and Germany, but in 1814 he returned to France. He opposed Napoleon during the Hundred Days.

After the restoration of the Bourbons, Grégoire remained influential, though as a revolutionary and a schismatic bishop he was also the object of hatred by royalists. He was expelled from the Institut de France, and forced into retirement.

In 1814 he published, De la constitution française de l'an 1814, in which be commented on the Charter from a Liberal point of view, and this reached its fourth edition in 1819, in which year he was elected to the Lower Chamber by the département of Isère. This was considered a potentially harmful episode by the powers of the Quintuple Alliance, and the question was raised of a fresh armed intervention in France under the terms of the secret Treaty of Aix-la-Chapelle. To prevent this, Louis XVIII decided on a modification of the franchise; the Marquis Dessolles ministry resigned; and the first act of Count Decazes, the new premier, was to annul the election of Grégoire.

From this time onward the former bishop lived in retirement, occupying himself in literary pursuits and in correspondence with other intellectual figures of Europe. He was compelled to sell his library to obtain means of support.

Despite his revolutionary Gallican and liberal views, Grégoire considered himself a devout Catholic. During his last illness, he confessed to his parish curé, a priest of Jansenist sympathies, expressing his desire for the last sacraments of the Church. These Hyacinthe-Louis De Quelen, the Archbishop of Paris, would only concede on condition that he retract his oath to the Civil Constitution of the Clergy, which he refused to do.

In defiance of the archbishop, the Abbé Baradère gave him the viaticum, while the rite of extreme unction was administered by the Abbé Guillon, an opponent of the Civil Constitution, without consulting the archbishop or the parish curé. The attitude of the archbishop caused great excitement in Paris, and the government had to take precautions to avoid a repetition of the riots which in the preceding February had led to the sacking of the church of Saint-Germain l'Auxerrois and the archiepiscopal palace. Grégoire's funeral was held at the church of the Abbaye-aux-Bois. The clergy absented themselves in obedience to the archbishop's orders, but mass was sung by the Abbé Grieu assisted by two clerics, the catafalque being decorated with the episcopal insignia. After the hearse set out from the church the horses were unyoked, and it was pulled by students to the cemetery of Montparnasse, the cortege being followed by a sympathetic crowd of some 20,000 people.

Besides several political pamphlets, Grégoire was the author of: