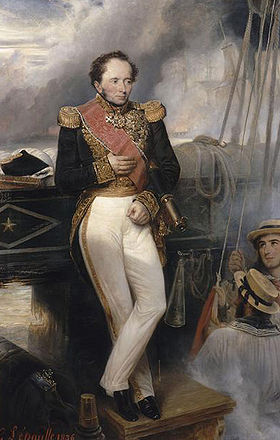 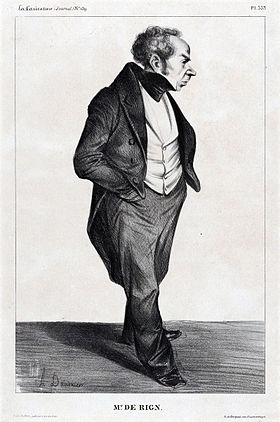 Marie Henri Daniel Gauthier, comte de Rigny (February 2, 1782 – November 6, 1835) was the commander of the French squadron at the Battle of Navarino in the Greek War of Independence.

He was a nephew of Baron Joseph Dominique, baron Louis, and son of a former captain in the Penthièvre Dragoon regiment, and who died leaving five small boys, including his brother, the future General Rigny. The French Revolution led him out of the Pont-à-Mousson school, where he had been sent. He was ten years old then, had lost his father and his mother was listed as the list of emigrants. An aunt collected the family, consisting of a young girl of sixteen years and five boys, including Henry, the eldest. After spending several months in Special School in Brest, where he had been sent there to finish his studies, in 1798, he entered the navy as a midshipman with Admiral Étienne Eustache Bruix. In 1799 he was appointed midshipman.

He assisted in the blockade of Porto Ferrajo and the Battle of Algeciras, and then he made the Egyptian campaign, and took part in the Saint-Domingue expedition, Corsica and Spain. In 1803 he was appointed ensign and as such sent to the camp of Boulogne, he is responsible for commanding a corvette La Triomphante.

Interrogated by Napoleon about the tides for the invasion of England, the young sailor gave to the Emperor a response strong and concise. Embedded with the marines of the Guard in the Army in 1806 and 1807, he made in the course of two years these campaigns Prussia, Poland and Pomerania; fought at Jena, to Pułtusk, the siege of Stralsund and Graudentz, where he was wounded. Assigned to the army of Spain in 1808, he became aide-de-camp of Marshal Bessières; he distinguished himself at the Battle of Medina de Rioseco, and was wounded at the Battle of Somosierra, and he witnessed the capture of Madrid, in 1809, and the Battle of Wagram.

Promoted to the rank of lieutenant in the same year 1809, Mr. de Rigny was in 1811 commander, and received orders to sail for the English fleet which blockaded Cherbourg and Le Havre. He accomplished this with courage dangerous mission. In 1813 he was wounded again, while clearing the village of Barselen occupied by the British.

In 1816, He was elevated to the rank of captain, in 1822 received the command of the naval forces assembled in the Levant. He soon raised the French flag daily in these waters against the Greek and Turkish pirates, his intelligent care settled in the Archipelago Police navigation. He was appointed Admiral in 1823, and was called in September 1827, to ensure the resolution of France, Russia and England, who had united to wrest Greece to the Turkish rule. In 1827 he commanded the French fleet at the Battle of Navarino. It earned him of the Cross of the Order of the Bath and the Order of St. Alexander Nevsky and the title of Vice-Admiral.

Back in France after the evacuation of the Morea, which he chaired, the Admiral was appointed maritime prefect of Toulon in 1829. In 1829 Charles X awarded him the title of Count of Rigny, but he refused until August 8 that year, the portfolio of the Navy in the Polignac ministry. Admiral Count Rigny went into the Levant to resume command of the fleet. Returning to Toulon for health reasons, in September 1830 he was appointed to the Board of Admiralty, and received the decoration of Grand Officer of the Legion of Honor.

Called in 1831 to the Chamber of Deputies by a double election, Admiral Rigny received, March 3 of that year, Louis-Philippe, the portfolio of the navy. Assigned on April 4, 1834, the Department of Foreign Affairs, he started that administration of a new activity.

On September 17, 1834, he married Adele Defontaine Narcissus, of Mons (born May 13, 1803), widow in her first marriage to a wealthy Belgian businessman, Daniel Honnor Florent François (1780–1830), with whom she had two daughters: Elise (1826–1876), later Duchess of Padua by his marriage with Louis Arrighi de Casanova, and Leonie (1829–1892), later Marchioness of Talhouët by her marriage with Augustus Talhouët Roy.

On March 12, 1835, his health became increasingly unsteady, forcing him to resign his ministerial duties, but in August, he accepted a short mission to Naples. He was barely back in late October, when he felt the first attacks of which he succumbed on the night of 6 to 7 November 1835 at the age of 52 years. After his death, his widow gave birth to a daughter, Amelia Marie Gaultier Rigny born February 7, 1868. She married Baron Verneaux and died July 6, 1868 at the Chateau de Ris Ris-Orangis. The Countess of Rigny, his mother also died at the Chateau de Ris, November 13, 1875.