Henry was the eldest son of Henry the Lion, Duke of Saxony and Bavaria and Matilda, the eldest daughter of King Henry II of England and Eleanor of Aquitaine. 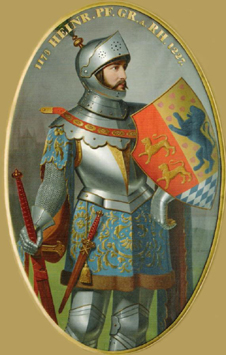 After his father's deposition by the Hohenstaufen emperor Frederick Barbarossa, he grew up in England. When the family returned to Germany in 1189, young Henry distinguished himself by defending the Welf residence of Braunschweig against the forces of the emperor's son King Henry VI. Peace was established the next year, provided that Henry and his younger brother Lothar (d. 1190) were held in hostage by the king. He had to join the German forces on the 1191 campaign to the Italian Kingdom of Sicily and participated in the siege of Naples. Henry finally deserted, fled to Marseille, and returned to Germany where he falsely proclaimed Henry VI's death and tried to underline his own abilities as a possible successor.

Though he was banned, he became heir to the County Palatine of the Rhine through his 1193 marriage to Agnes, a cousin of Emperor Henry VI and daughter of the Hohenstaufen count palatine Conrad. He and the emperor reconciled shortly afterwards, and upon Conrad's death in 1195, Henry was enfeoffed with his County Palatine. A close ally of the emperor, he accompanied him on the conquest of Sicily in 1194/95 and on the Crusade of 1197.[1]

After the sudden death of the emperor in 1197, Henry's younger brother Otto IV became one of two rival kings of the Holy Roman Empire. At first he supported him, but switched sides to Philip of Swabia in 1203. Having divided the Welf allodial lands with his brothers Otto and William of Winchester, Henry then ruled over the northern Saxon territories around Stade and Altencelle and also was confirmed as count palatine by King Philip. When the German throne quarrel ended with Philip's assassination in 1208, Henry again sided with Otto IV. In Imperial service, he tried to ward off the territorial claims by the Rhenish Prince-archbishops of Cologne, Trier and Mainz, though to no avail.

After the death of his cousin Arthur I, Duke of Brittany in April 1203, Henry effectively became the heir of his maternal uncle John Lackland to the English throne, this ended though when John's son (the future king Henry III) was born in October 1207.

After he inherited further significant properties in Saxony from his brother William in 1213, Henry ceded the Palatinate to his son Henry the Younger and moved north. After his son's early death the next year, he left his Welf properties to his nephew, William's son Otto the Child, who became the first Duke of Brunswick-Lüneburg in 1235. Henry died in 1227 and is entombed in Brunswick Cathedral.

Around 1209, he married Agnes of Landsberg (d. 1248), daughter of the Wettin margrave Conrad II of Lusatia.