Princess Hermine was born in Greiz, the fifth child and fourth daughter of Heinrich XXII, Prince Reuss (Elder Line) (28 March 1846 – 19 April 1902), and Princess Ida Mathilde Adelheid of Schaumburg-Lippe (28 July 1852 – 28 September 1891), daughter of Adolf I, Prince of Schaumburg-Lippe.[3] Her father was the ruler of the Principality of Reuss-Greiz, a state of the German Empire, in what is present-day Thuringia. Princess Hermine's disabled elder brother became Prince Henry XXIV in 1902.

Upon her mother's early death, she was raised at the court of Princess Louise of Prussia, daughter of Emperor Wilhelm I, and her husband Grand Duke Frederick I of Baden. Like Hermine's father, Princess Louise was an implacable enemy of Prince Bismarck.[citation needed]

They were the parents to five children: 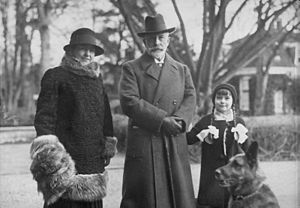 Hermine with Wilhelm II and her daughter Henriette in Doorn, 1931

In January 1922, a son of Princess Hermine sent birthday wishes to the exiled German Emperor Wilhelm II, who then invited the boy and his mother to Huis Doorn. Wilhelm found Hermine very attractive, and greatly enjoyed her company. The two had much in common, both being recently widowed: Hermine just over a year and a half before, and Wilhelm only nine months prior.

By early 1922, Wilhelm was determined to marry Hermine. Despite grumblings from Wilhelm's monarchist supporters and the objections of his children, 63-year-old Wilhelm and 34-year-old Hermine married on 5 November 1922 in Doorn.[3] By all accounts, it was a happy marriage. Hermine's first husband had also been older than she was, by fourteen years. Wilhelm and Hermine were 5th cousins through common descent from George II of Great Britain.

In 1927 Hermine wrote An Empress in Exile: My Days in Doorn, an account of her life up to that time. She cared for the property management of Huis Doorn and by establishing her own relief organisation stayed in contact with monarchist and nationalist circles in the Weimar Republic. Hermine remained a constant companion to the aging emperor until his death in 1941. They had no children.

Following the death of Wilhelm, Hermine returned to Germany to live on her first husband's estate in Saabor, Lower Silesia. During the Vistula–Oder Offensive of early 1945, she fled from the advancing Red Army to her sister's estate in Rossla, Thuringia. After the end of the Second World War, she was held under house arrest at Frankfurt on the Oder in the Soviet occupation zone, and later imprisoned in the Paulinenhof Internment Camp. On 7 August 1947, aged only 59, she died suddenly of a heart attack in a small flat in Frankfurt, while under strict guard by the Red Army occupation forces.[3] She was buried in the Antique Temple of Sanssouci Park, Potsdam, which would become East Germany 2 years later the resting place of several other members of the Imperial family, including Wilhelm's first wife, Augusta Victoria of Schleswig-Holstein.

Titles from birth to death

Although Wilhem was no longer a reigning monarch at the time of his marriage, he continued to use his titles in pretense after abdication. Hermine used the courtesy titles of German Empress and Queen of Prussia. By tradition, women were entitled to royal titles, styles and rank of their husbands if their statuses before marriage were considered equal or not "morganatic". As Hermine was born of a sovereign house, the marriage complied with the laws of the imperial House of Hohenzollern. Her titles by birth, marriage, and courtesy were: