Hershey is an unincorporated community and census-designated place (CDP) in Derry Township, Dauphin County, Pennsylvania, United States. Hershey's chocolates are made in Hershey, which was founded by candy magnate Milton S. Hershey.

The community is located 14 miles (23 km) east of Harrisburg and is part of the Harrisburg−Carlisle Metropolitan Statistical Area. Hershey has no legal status as an incorporated municipality, and all its municipal services are provided by Derry Township. The population was 14,257 at the 2010 census.[2]

It is popularly called "Chocolatetown, USA".[citation needed] Hershey is also referred to as "The Sweetest Place on Earth".[1]

Hershey is located in southeastern Dauphin County, in the center and eastern parts of Derry Township. It is bordered to the east by Palmdale (also in Derry Township) and by Campbelltown (in South Londonderry Township, Lebanon County). To the west is the borough of Hummelstown. Over half the population of Derry Township is within the Hershey CDP.

U.S. Route 422 (Chocolate Avenue) runs through the center of Hershey, and U.S. Route 322 passes south of the center. The two highways merge at the western end of Hershey, at an interchange with Pennsylvania Route 39. US 422 leads east 43 miles (69 km) to Reading, while US 322 leads southeast 28 miles (45 km) to Ephrata and west 15 miles (24 km) to Harrisburg, the state capital. Route 39 provides access to Hersheypark and Chocolate World, located in the northern part of the CDP, and continues north 6 miles (10 km) to Interstate 81 at Skyline View.

Hershey has a humid continental climate, very common in Pennsylvania. Temperatures can be up to 95 °F in the summer, and less than 20 °F in the winter.

Hershey was once home to the Hershey Wildcats of the A-League. This professional soccer team folded after the 2001 season when its owners decided that it would not be successful financially. The Wildcats were named after a popular roller-coaster in Hersheypark. Hershey was also home to the Hershey Impact over the AISL indoor soccer league.

National Basketball Association player Wilt Chamberlain scored 100 points for the Philadelphia Warriors in a regular season game played at Hersheypark Arena in 1962; his effort remains a single-game record for the league. 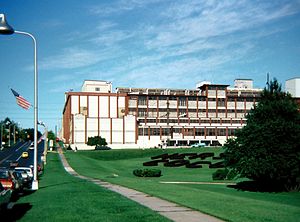 The community is home to The Hershey Company, which makes the well-known Hershey Bar and Hershey's Kisses and is the parent company of the H. B. Reese Candy Company, manufacturer of Reese's Peanut Butter Cups. Hershey's Chocolate World is a factory store and virtual tour ride of The Hershey Company. The original Hershey Chocolate Factory, located downtown along Chocolate Avenue, was closed in 2012 due to high operational costs and has since been demolished. [8]

Hershey Entertainment and Resorts Company owns and operates Hersheypark, Hersheypark Stadium, and other attractions such as ZooAmerica and Hershey Gardens, and is a major employer of the community and surrounding area.

Hershey is known to host a variety of famous people through its Stadium Hershey Stadium. For example, this venue will host "The Dixie Chicks" and on a separate occasion Demi Lovato this summer (2015). In the past (2004), it hosted a President George W. Bush's re-election campaign event. Not only does this Stadium host famous people, it is also the venue of the Cocoa Bean Game. The football game in-between Hershey High School and Milton S. Hershey High School.

In the Mad Men season 6 finale, "In Care Of", Donald Draper makes a pitch that impresses Hershey's executives. He then reverses the effect (and gets himself suspended from the firm) by sharing his sordid background and the role Hershey's candy bars played in it. At the episode's end, Don takes his children to see the brothel he grew up in, in Hershey, Pennsylvania.[10][11]
In the Simpsons episode "Homerland", Homer says: "I’ve never prayed to a city in my life and if I did it’d be Hershey, Pennsylvania."[12]