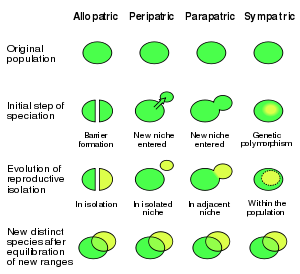 Heteropatric and heteropatry are terms from biogeography, referring to organisms whose geographical ranges overlap or are even identical, so that they occur together at least in some places, but which occupy ecological niches distinct enough to prevent frequent hybridization. Such organisms are usually closely related (e.g. sister species), their distribution and ecology being the result of heteropatric speciation.

Although some evolutionary biologists still regard sympatric speciation as a highly contentious issue, both theoretical[3] and empirical[4] studies increasingly support sympatric speciation as a likely process in explaining the diversity of life in particular ecosystems. Arguments either implicitly or explicitly implicate competition and niche separation of sympatrically co-occurring ecological variants that through assortative mating ultimately evolve into separate races and then species. Assortative mating most easily occurs if mating is linked to niche preference, as occurs in the apple maggot Rhagoletis pomonella where individual flies from different races use volatile odors to discriminate between hawthorn and apple and look for mates on natal fruit.

In essence, the term heteropatry semantically resolves the issue of sympatric speciation by reducing it to a scaling issue in terms of the way the landscape is used by individuals versus populations. Specifically, from a population perspective, the process looks sympatric, but from an individual’s perspective, the process looks allopatric, once the time spent flying over or moving quickly through intervening non-preferred niches is taken into account.