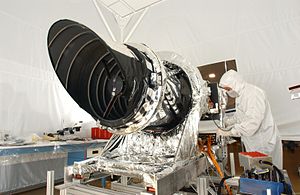 High Resolution Imaging Science Experiment is a camera on board the Mars Reconnaissance Orbiter. The 65 kg (143 lb), $40 million USD instrument was built under the direction of the University of Arizona's Lunar and Planetary Laboratory by Ball Aerospace & Technologies Corp. It consists of a 0.5 m (19.7 in) aperture reflecting telescope, the largest so far of any deep space mission, which allows it to take pictures of Mars with resolutions of 0.3 m/pixel (about 1 foot), resolving objects below a meter across.

HiRISE has imaged Mars landers on the surface, including the ongoing Curiosity[1] and Opportunity rover missions.[2] 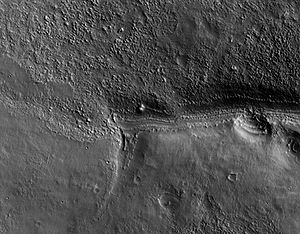 In the late 1980s, Alan Delamere of Ball Aerospace began planning the kind of high-resolution imaging needed to support sample return and surface exploration of Mars. In early 2001 he teamed up with Alfred McEwen of the University of Arizona to propose such a camera for the Mars Reconnaissance Orbiter (MRO), and NASA formally accepted it November 9, 2001.[3]

Ball Aerospace was given the responsibility to build the camera and they delivered HiRISE to NASA on December 6, 2004 for integration with the rest of the spacecraft.[4] It was prepared for launch on board the MRO on August 12, 2005, to the cheers of the HiRISE team who were present.[5] 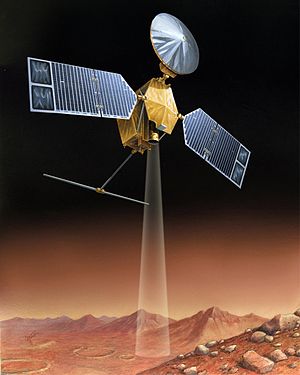 Artist's rendition of HiRISE at Mars

During the cruise phase of MRO, HiRISE took multiple test shots including several of the Moon and the Jewel Box cluster. These images helped to calibrate the camera and prepare it for taking pictures of Mars.

On March 10, 2006, MRO achieved Martian orbit and primed HiRISE to acquire some initial images of Mars.[6] The instrument had two opportunities to take pictures of Mars (the first was on March 24, 2006) before MRO entered aerobraking, during which time the camera was turned off for six months.[7] It was turned on successfully September 27, and took its first high-resolution pictures of Mars on September 29.

On October 6, 2006 HiRISE took the first image of Victoria Crater, a site which is also under study by the Opportunity rover.[8]

In February 2007 seven detectors showed signs of degradation, with one IR channel almost completely degraded, and one other showing advanced signs of degradation. The problems seem to disappear when higher temperatures are used to take pictures with the camera.[9] As of March, the degradation appeared to have stabilized, but the underlying cause remained unknown.[10] Subsequent experiments with the Engineering Model (EM) at Ball Aerospace provided definitive evidence for the cause: contamination in the analog-to-digital converters (ADCs) which results in flipping bits to create the apparent noise or bad data in the images, combined with design flaws leading to delivery of poor analog waveforms to the ADCs. Further work showed that the degradation can be reversed by heating the ADCs.

On May 25, 2008, HiRISE imaged NASA's Mars Phoenix Lander parachuting down to Mars. It was the first time that one spacecraft imaged the final descent of another spacecraft onto a planetary body.[12]

On April 1, 2010, NASA released the first images under the HiWish program in which the public suggested places for HiRISE to photograph. One of the eight locations was Aureum Chaos.[13] The first image below gives a wide view of the area. The next two images are from the HiRISE image.[14] By 2010, HiRISE had imaged about one percent of Mars's surface.[15] It was designed to capture smaller areas at high resolution—other instruments scan much more area to find things like fresh impact craters. 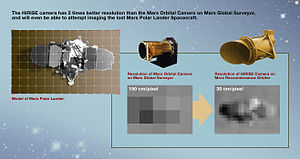 Comparison of resolution of MRO HiRISE camera with predecessor, the MOC aboard MGS

The HiRISE camera is designed to view surface features of Mars in greater detail than has previously been possible.[16] It has provided a closer look at fresh martian craters, revealing alluvial fans, viscous flow features and ponded regions of pitted materials containing breccia clast.[17] This allows for the study of the age of Martian features, looking for landing sites for future Mars landers, and in general, seeing the Martian surface in far greater detail than has previously been done from orbit. By doing so, it is allowing better studies of Martian channels and valleys, volcanic landforms, possible former lakes and oceans, and other surface landforms as they exist on the Martian surface.[18]

The general public is allowed to request sites for the HiRISE camera to capture (see HiWish). For this reason, and due to the unprecedented access of pictures to the general public, shortly after they have been received and processed, the camera has been termed "The People's Camera".[19] The pictures can be viewed online, downloaded, or with the free HiView software. 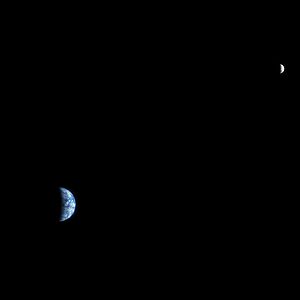 Earth and Moon from Mars Reconnaissance Orbiter taken by HiRISE

HiRISE incorporates a 0.5-meter primary mirror, the largest optical telescope ever sent beyond Earth's orbit. The mass of the instrument is 64.2 kg.[22]

Red color images are at 20,048 pixels wide (6 km in a 300 km orbit), and Green-Blue and NIR are at 4,048 pixels wide (1.2 km). These are gathered by 14 CCD sensors, 2048 x 128 pixels. HiRISE's onboard computer reads out these lines in time with the orbiter's ground speed, meaning the images are potentially unlimited in height. Practically this is limited by the onboard computer's 28 Gbit (3.5 GByte) memory capacity. The nominal maximum size of red images (compressed to 8 bits per pixel) is about 20,000 × 126,000 pixels, or 2520 megapixels and 4,000 × 126,000 pixels (504 megapixels) for the narrower images of the B-G and NIR bands. A single uncompressed image uses up to 28 Gbit. However, these images are transmitted compressed,with a typical max size of 11.2 Gigabits. These images are released to the general public on the HiRISE website via a new format called JPEG 2000.[23][24]

To facilitate the mapping of potential landing sites, HiRISE can produce stereo pairs of images from which the topography can be measured to an accuracy of 0.25 meter. 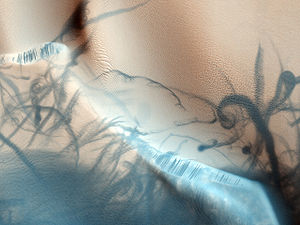 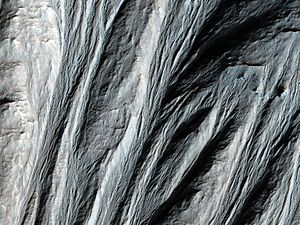 Gullies in the southern highlands of Mars

HIRISE images are available to the public, so it can be useful to know how they are named. This is an excerpt from the official documentation: