The High Frequency Active Auroral Research Program (HAARP) was an ionospheric research program jointly funded by the U.S. Air Force, the U.S. Navy, the University of Alaska[clarification needed], and the Defense Advanced Research Projects Agency (DARPA).[1] Designed and built by BAE Advanced Technologies (BAEAT), its purpose was to analyze the ionosphere and investigate the potential for developing ionospheric enhancement technology for radio communications and surveillance.[2] The HAARP program operated a major sub-arctic facility, named the HAARP Research Station, on an Air Force-owned site near Gakona, Alaska.

The most prominent instrument at the HAARP Station is the Ionospheric Research Instrument (IRI), a high-power radio frequency transmitter facility operating in the high frequency (HF) band. The IRI is used to temporarily excite a limited area of the ionosphere. Other instruments, such as a VHF and a UHF radar, a fluxgate magnetometer, a digisonde (an ionospheric sounding device), and an induction magnetometer, were used to study the physical processes that occur in the excited region.

Work on the HAARP Station began in 1993. The current working IRI was completed in 2007, and its prime contractor was BAE Systems Advanced Technologies.[1] As of 2008, HAARP had incurred around $250 million in tax-funded construction and operating costs. It was reported to be temporarily shut down in May 2013, awaiting a change of contractors. In May 2014, it was announced that the HAARP program would be permanently shut down later in the year.[3] Ownership of the facility and its equipment was transferred to the University of Alaska Fairbanks in mid-August 2015.[4]

HAARP was a target of conspiracy theorists, who claimed that it was capable of modifying weather, disabling satellites and exerting mind control over people, and that it was being used as a weapon against terrorists. Such theorists blamed the program for causing earthquakes, droughts, storms and floods, diseases such as Gulf War syndrome and chronic fatigue syndrome, the 1996 crash of TWA Flight 800, and the 2003 destruction of the space shuttle Columbia. Commentators and scientists say that proponents of these theories are "uninformed", because most theories put forward fall well outside the abilities of the facility and often outside the scope of natural science.[5][6]

The HAARP program began in 1990. A U.S. senator from Alaska, Republican Ted Stevens, helped win approval for the facility,[7] whose construction began in 1993.

In early May 2013, HAARP was temporarily shut down, awaiting a change between contractors who operated the facility. In July 2013, HAARP program manager James Keeney said, "Defense Advanced Research Projects Agency (DARPA) is expected on site as a client to finish up some research in fall 2013 and winter 2014."[8][9] The temporary shutdown was described as being due to "a contractor regime change." Ahtna, Incorporated, the Alaska Native corporation serving the region of Alaska where the HAARP site is located, was reportedly in talks to take over the facility administration contract from Marsh Creek, LLC.[10]

In May 2014, the Air Force announced that the HAARP program would be shut down later in 2014.[3][11] While experiments ended in the summer of 2014, the complete shutdown and dismantling of the facility was postponed until at least May 2015.[12] In mid-August 2015 control of the facility and its equipment was given to the University of Alaska Fairbanks. The University plan to make the facilities available for researchers on a pay-per-use basis.[13] 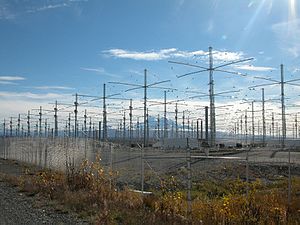 The HAARP project directs a 3.6 MW signal, in the 2.8–10 MHz region of the HF (high-frequency) band, into the ionosphere. The signal may be pulsed or continuous. Then, effects of the transmission and any recovery period can be examined using associated instrumentation, including VHF and UHF radars, HF receivers, and optical cameras. According to the HAARP team, this will advance the study of basic natural processes that occur in the ionosphere under the natural but much stronger influence of solar interaction, and how the natural ionosphere affects radio signals.

This will enable scientists to develop methods to mitigate these effects to improve the reliability or performance of communication and navigation systems which would have a wide range of both civilian and military uses, such as an increased accuracy of GPS navigation and advances in underwater and underground research and applications. This may lead to improved methods for submarine communication or an ability to remotely sense and map the mineral content of the terrestrial subsurface, and perhaps underground complexes, of regions or countries, among other things. The current facility lacks range to be used in regions like the Middle East, according to one of the researchers involved, but the technology could be put on a mobile platform.[14]

According to HAARP's original management, the project strove for openness, and all activities were logged and publicly available. Scientists without security clearances, even foreign nationals, were routinely allowed on site. The HAARP facility regularly (once a year on most years according to the HAARP home page) hosted open houses, during which time any civilian could tour the entire facility. In addition, scientific results obtained with HAARP were routinely published in major research journals (such as Geophysical Research Letters, or Journal of Geophysical Research), written both by university scientists (American and foreign) and by U.S. Department of Defense research lab scientists. Each summer, the HAARP held a summer school for visiting students, including foreign nationals, giving them an opportunity to do research with one of the world's foremost research instruments.

The profile of the ionosphere is highly variable, changing constantly on timescales of minutes, hours, days, seasons, and years. This profile becomes even more complex near Earth's magnetic poles, where the nearly vertical alignment and intensity of earth's magnetic field can cause physical effects like aurorae.

Some of the main scientific findings from HAARP include

Research at the HAARP included

Research done at the HAARP facility has allowed the US military to perfect communications with its fleet of submarines by sending radio signals over long distances.[19][20]

The main instrument at HAARP Station is the Ionospheric Research Instrument (IRI). This is a high power, high-frequency phased array radio transmitter with a set of 180 antennas, disposed in an array of 12x15 units that occupy a rectangle of about 33 acres (13 hectares). The IRI is used to temporarily energize a small portion of the ionosphere. The study of these disturbed volumes yields important information for understanding natural ionospheric processes.

During active ionospheric research, the signal generated by the transmitter system is delivered to the antenna array and transmitted in an upward direction. At an altitude between 70 to 350 km (43 to 217 mi) (depending on operating frequency), the signal is partially absorbed in a small volume several tens of kilometers in diameter and a few meters thick over the IRI. The intensity of the HF signal in the ionosphere is less than 3 µW/cm², tens of thousands of times less than the Sun's natural electromagnetic radiation reaching the earth and hundreds of times less than even the normal random variations in intensity of the Sun's natural ultraviolet (UV) energy which creates the ionosphere. The small effects that are produced, however, can be observed with the sensitive scientific instruments installed at the HAARP Station, and these observations can provide information about the dynamics of plasmas and insight into the processes of solar-terrestrial interactions.[21]

Each antenna element consists of a crossed dipole that can be polarized for linear, ordinary mode (O-mode), or extraordinary mode (X-mode) transmission and reception.[22][23] Each part of the two section crossed dipoles are individually fed from a specially designed, custom built transmitter, that operates at very low distortion levels. The Effective Radiated Power (ERP) of the IRI is limited by more than a factor of 10 at its lower operating frequencies. Much of this is due to higher antenna losses and a less efficient antenna pattern.

The IRI can transmit between 2.7 and 10 MHz, a frequency range that lies above the AM radio broadcast band and well below Citizens' Band frequency allocations. The HAARP Station is licensed to transmit only in certain segments of this frequency range, however. When the IRI is transmitting, the bandwidth of the transmitted signal is 100 kHz or less. The IRI can transmit in continuous waves (CW) or in pulses as short as 10 microseconds (µs). CW transmission is generally used for ionospheric modification, while transmission in short pulses frequently repeated is used as a radar system. Researchers can run experiments that use both modes of transmission, first modifying the ionosphere for a predetermined amount of time, then measuring the decay of modification effects with pulsed transmissions.

There are other geophysical instruments for research at the Station. Some of them are:

The Station is powered by a set of five (5) 2500 kilowatt generators being driven by EMD 20-645-E4 diesel locomotive engines.

The project site (Lua error in Module:Coordinates at line 668: callParserFunction: function "#coordinates" was not found.) is north of Gakona, Alaska just west of Wrangell-Saint Elias National Park. An environmental impact statement led to permission for an array of up to 180 antennas to be erected.[24] The HAARP has been constructed at the previous site of an over-the-horizon radar (OTH) installation. A large structure, built to house the OTH now houses the HAARP control room, kitchen, and offices. Several other small structures house various instruments. The HAARP site has been constructed in three distinct phases:[25]

In America, there are two related ionospheric heating facilities: the HIPAS, near Fairbanks, Alaska, which was dismantled in 2009, and (currently offline for reconstruction) one at the Arecibo Observatory[27] in Puerto Rico. The European Incoherent Scatter Scientific Association (EISCAT) operates an ionospheric heating facility, capable of transmitting over 1 GW effective radiated power (ERP), near Tromsø, Norway.[28] Russia has the Sura Ionospheric Heating Facility, in Vasilsursk near Nizhniy Novgorod, capable of transmitting 190 MW ERP.

HAARP is the subject of numerous conspiracy theories. Various individuals have speculated about hidden motives and capabilities of the project. For example, Rosalie Bertell warned in 1996 about the deployment of HAARP as a military weapon.[29] Michel Chossudovsky stated in a book published by the Committee on Monetary and Economic Reform that "recent scientific evidence suggests that HAARP is fully operational and has the ability of triggering floods, droughts, hurricanes and earthquakes."[30] Over time, HAARP has been blamed for triggering catastrophes such as floods, droughts, hurricanes, thunderstorms, earthquakes in Iran, Pakistan, Haiti, Turkey, Greece and the Philippines, major power outages, the downing of TWA Flight 800, Gulf War syndrome, and chronic fatigue syndrome.[6][31][32]

Allegations include the following:

Stanford University professor Umran Inan told Popular Science that weather-control conspiracy theories were "completely uninformed," explaining that "there's absolutely nothing we can do to disturb the Earth's [weather] systems. Even though the power HAARP radiates is very large, it's minuscule compared with the power of a lightning flash—and there are 50 to 100 lightning flashes every second. HAARP's intensity is very small."[5]

Computer scientist David Naiditch characterizes HAARP as "a magnet for conspiracy theorists", saying that HAARP attracts their attention because "its purpose seems deeply mysterious to the scientifically uninformed".[6] Journalist Sharon Weinberger called HAARP "the Moby Dick of conspiracy theories" and said the popularity of conspiracy theories often overshadows the benefits HAARP may provide to the scientific community.[38][39] Austin Baird writing in the Alaska Dispatch said, "What makes HAARP susceptible to conspiracy criticism is simple. The facility doesn't open its doors in the same way as other federally-funded research facilities around the country, and it doesn't go to great efforts to explain the importance of its research to the public."[31]