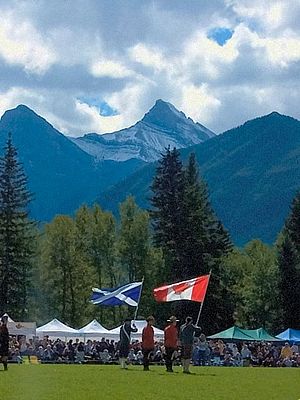 Highland games are events held in spring and summer in Scotland and other countries as a way of celebrating Scottish and Celtic culture and, especially that of the Scottish Highlands. Certain aspects of the games are so well known as to have become emblematic of Scotland, such as the bagpipes, the kilt, and the heavy events, especially the caber toss. While centred on competitions in piping and drumming, dancing, and Scottish heavy athletics, the games also include entertainment and exhibits related to other aspects of Scottish and Gaelic culture.

The Cowal Highland Gathering, better known as the Cowal Games, held in Dunoon, Scotland, every August, is the largest Highland games in the world,[1] attracting around 3,500 competitors and somewhere in the region of 23,000 spectators[1] from around the globe. Worldwide, however, it is exceeded in terms of spectators by two gatherings in the United States: the estimated 30,000[2] that attend Grandfather Mountain in North Carolina and the even larger gathering—the largest in the Northern Hemisphere[3]—that has taken place every year since 1866 hosted by the Caledonian Club of San Francisco.[4] This event is currently held on Labor Day weekend in Pleasanton, California, and their Sesquicentennial Games held on September 5–6, 2015, attracted record crowds close to 50,000.[3]

The games are claimed to have influenced Baron Pierre de Coubertin when he was planning the revival of the Olympic Games. De Coubertin saw a display of Highland games at the Paris Exhibition of 1889.[5]

The origin of human games and sports predates recorded history. An example of a possible early games venue is at Fetteresso, although that location is technically a few miles south of the Scottish Highlands.

It is reported in numerous Highland games programs, that King Malcolm III of Scotland, in the 11th century, summoned contestants to a foot race to the summit of Craig Choinnich (overlooking Braemar).[2] King Malcolm created this foot race in order to find the fastest runner in the land to be his royal messenger. Some have seen this apocryphal event to be the origin of today's modern Highland games.[3]

There is a document from 1703 summoning the clan of the Laird of Grant, Clan Grant. They were to arrive wearing Highland coats and "also with gun, sword, pistol and dirk".[4] From this letter, it is believed that the competitions would have included feats of arms.

However, the modern Highland games are largely a Victorian invention, developed after the Highland Clearances. 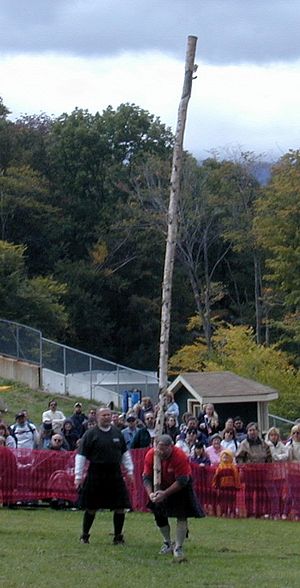 A caber being thrown at the 2000 New Hampshire Highland Games

In their original form many centuries ago, Highland games revolved around athletic and sports competitions. Though other activities were always a part of the festivities, many today still consider Highland athletics to be what the games are all about—in short, that the athletics are the Games, and all the other activities are just entertainment. Regardless, it remains true today that the athletic competitions are at least an integral part of the events and one—the caber toss—has come to almost symbolize the Highland games.

Although quite a range of events can be a part of the Highland athletics competition, a few have become standard. 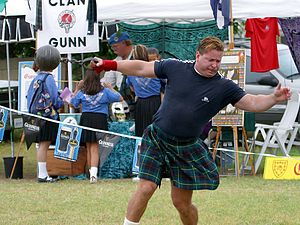 Many of the Heavy Events competitors in Scottish highland athletics are former high school and college track and field athletes who find the Scottish games are a good way to continue their competitive careers.

Increasingly in the USA, the Heavy Events are attracting women and master class athletes which has led to a proliferation of additional classes in Heavy Events competitions. Lighter implements are used in the classes. 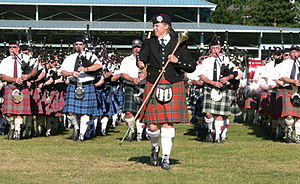 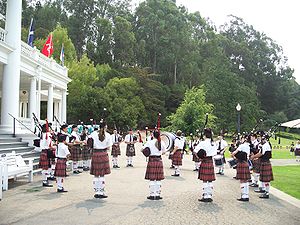 For many Highland games festival attendees, the most memorable of all the events at the games is the massing of the pipe bands. Normally held in conjunction with the opening and closing ceremonies of the games, as many as 20 or more pipe bands will march and play together. The result is a thunderous rendition of Scotland the Brave or Amazing Grace, and other crowd-pleasing favourites.

It is, in fact, the music of the bagpipe which has come to symbolize music at the Games and, indeed, in Scotland itself. In addition to the massed bands, nearly all Highland games gatherings feature a wide range of piping and drumming competition, including solo piping and drumming, small group ensembles and, of course, the pipe bands themselves.

Music at Highland games gatherings also includes other forms, such as fiddling, harp circles and Celtic bands, usually spiced with a large amount of bagpipe music.

The Cowal Highland Gathering hosts the annual World Highland Dancing Championship. This event gathers the best competitive dancers from around the world who compete for the SOBHD sanctioned World Championship title. 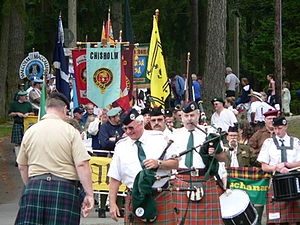 At modern-day Highland Games events, a wide variety of other activities and events are generally available. Foremost among these are the clan tents and vendors of Scottish related goods. The various clan societies make the Highland games one of the main focus of their seasonal activities, usually making an appearance at as many such events as possible. Visitors can find out information about the Scottish roots and can become active in their own clan society if they wish.

At modern games, armouries will display their collections of swords and armour, and often perform mock battles. Various vendors selling Scottish memorabilia are also present selling everything from Irn-Bru to the stuffed likeness of the Loch Ness Monster.

Herding dog trials and exhibitions are often held, showcasing the breeder's and trainer's skills. In addition, there may be other types of Highland animals present, such as the Highland cattle.

Various traditional and modern Celtic arts are often showcased. This could include Harper's circles, Scottish country dancing, and one or more entertainment stages. In addition, most events usually feature a pre-event ceilidh (a type of social event with traditional music, dancing, song, and other forms of entertainment).

On 1 August 1997 Canada Post issued 'Highland Games' designed by Fraser Ross, based on photographs by Andrew Balfour. The 45¢ stamps are perforated 12.5 x 13 and were printed by Canadian Bank Note Company, Limited.[9]