Jainism is an ancient religion of India. Jains trace their history through twenty-four tirthankara and revere Rishabha as the first tirthankara (in the present time-cycle). The last two tirthankara, the 23rd tirthankara Parshvanatha (c. 872 – c. 772 BCE)[1][2] and the 24th tirthankara Mahavira (c. 599 – c. 527 BCE)[3] are historical figures.[4][5] There is limited historical evidence for the 22nd tirthankara Neminatha[6] who was the cousin brother of Krishna.[7][8] Jainism is a philosophy of eternity and Jains consider their religion to be eternal.[9] As of now, this claim can be traced back as far as 3rd and 4th millennium B.C., due to the discovery of a series of great late Stone Age cities in the Indus Valley.[10]

The origins of Jainism are obscure.[11][12] Glasenapp (a Western scholar) writes that first century after the year 1000 BCE would be the higher limit to the origin of Jainism and consider the first twenty-two tirthankaras as legendary mythical figures.[13][14]

Views of the apologists

Scholars like Dr. Vilas A. Sangave, Champat Rai Jain, Prof. Buhler, H. Jacobi, Dr. Hornell, Pt. Sukhalalji, Prof. Vidyalankara, and others believe that Jainism is the earliest known religious systems prevailing in India and was widespread in the Indus Valley. The relics found in Harrapan excavations like the standing nude male figures in Kayotsarga, idols in Padmasana and images with serpent-heads, and the Bull symbol of Rishabha, represent Jain culture.[15][16][17][18][19]

Regarding the antiquity of Jainism, Dr. Heinrich Zimmer noted:

There is truth in the Jaina idea that their religion goes back to a remote antiquity, the antiquity in question being that of the pre-Aryan so called Dravidian period, which has recently been dramatically illuminated by the discovery of a series of great late Stone Age cities in the Indus Valley, dating from the third and perhaps even fourth millennium B.C.[10]

Historicity of the Tirthankaras 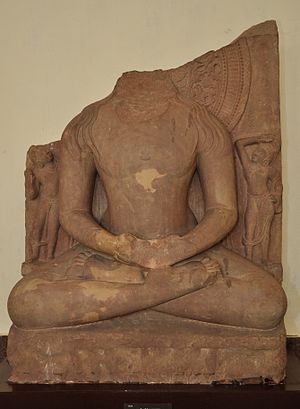 During the 6th century BCE, Mahāvīra became one of the most influential teachers of Jainism. Jains revere him as the twenty-fourth and last tirthankara of present cosmic age.[20] Though, Mahavira is sometimes regarded as the founder, he appears in the tradition as one who, from the beginning, had followed a religion established long ago.[21]

There is reasonable historical evidence that Parshvanatha, the predecessor of Mahavira lived somewhere in the 9th–7th century BCE.[4][22][23][24] Jains revere him as the 23rd Tirthankara.

Neminatha was the predecessor of Parshvanatha and 22nd Tirthankara of the Jain tradition. In 1890-91, Kankali Tila (a mound) at Mathura was excavated by Dr. Fuhrer. After studying the findings of this excavation, Dr. Fuhrer was of the view that Neminatha was a historical figure.[6]

During Chandragupta Maurya's reign, Acharya Bhadrabahu moved to Karnataka to survive a twelve-year-long famine. Sthulabhadra, a pupil of Acharya Bhadrabahu, stayed in Magadha. When followers of Acharya Bhadrabahu returned, there was a dispute between them regarding the authenticity of the Angas. Also, those who stayed at magadha started wearing white clothes, which was unacceptable to the others who remained naked. This is how the Digambara and Śvētāmbara sects arose, the Digambara being naked whereas the Svetambara were white clothed.[26] Digambara found this as being opposed to the Jain tenets which, according to them, required complete nudity. The presence of gymnosophists ("naked philosophers") in Greek records as early as the fourth century B.C., supports the claim of the Digambaras that they have preserved the ancient Śramaṇa practice.[27]

Traditionally, the original doctrine of Jainism was contained in scriptures called Purva. There were fourteen Purva. These are believed to have originated from Rishabha, the first tirthankara.[28] There was a twelve-year famine two centuries after the death of Mahavira, the last Jain tirthankara. At that time, Chandragupta Maurya was the ruler of Magadha and Bhadrabahu was the head of Jain community. Bhadrabahu went south to Karnataka with his adherents and Sthulabhadra, another Jain leader remained behind. During this time the knowledge of the doctrine was getting lost. A council was formed at Pataliputra where eleven scriptures called Angas were compiled and the remnant of fourteen purvas were written down in 12th Anga, Ditthivaya by the adherents of Sthulbhadra. The Digambara sect of Jainism rejects the authority of the Jain Agamas compiled by Sthulabhadra.[29] They believe that by the time of Dharasena, the twenty-third teacher after Indrabhuti Gautama, knowledge of only one Anga was there. This was about 683 years after the Nirvana of Mahavira. After Dharasena's pupils Pushpadanta and Bhutabali, even that was lost.[30] In course of time, the canons of svetambara were also getting lost.[31] About 980 to 993 years after the death of Mahavira, a council was held at Vallabhi in Gujarat. This was headed by Devardhi Ksamashramana.[31][32] It was found that the 12th Anga, the Ditthivaya, was lost too. The other Angas were written down.[31] This is a traditional account of schism.[33] According to Svetambara, there were eight schisms (Nihvana).[34]

According to Digambara tradition, Ganadhara knew fourteen Purva and eleven Anga. Knowledge of Purva was lost around 436 years after Mahavira and Anga were lost around 683 years after Mahavira.[35] The texts that do not belong to Anga are called Angabahyas. There were fourteen Angabahyas. The first four Anga bahayas, Samayika, chaturvimasvika, Vandana and Pratikramana corresponds to sections of second Mulasutra of svetambara. The only texts of anga bahyas which occurs in svetambara texts are Dasavaikalika, Uttaradhyayana and Kalpavyavahara.[36]

After the death of Parsva, his disciple Subhadatta became the head of the monks. Subhadatta was succeeded by Haridatta, Aryasamudra, Prabha and lastly Kesi.[37] Uttaradhyayana, a Svetambara text have records of a dialogue between Mahavira's disciple and kesi; kesi along with his community accepted Mahavira as a tirthankara and merged with him as a result.[38]

After Sudharma svami, a succession of five sutrakevalis, i.e. those who were well versed with scriptures, who headed the monks of the Jain community. Bhadrabahu was the last sutrakevali.[42] After Bhadrabahu, there were seven (or eleven) leaders.[41] The knowledge of the scriptures was gradually getting lost with each one of them.

The information regarding the history of Jainism is uncertain and fragmentary. Jains consider the king Bimbisara (c. 558–491 BCE), Ajatashatru (c. 492–460 BCE) Udayin of the Haryanka dynasty as a patron of Jainism.[43] Jainism also flourished under the Nanda Empire (424–321 BCE).[44]

Tradition says that Chandragupta Maurya (322–298 BCE), the founder of Mauryan Empire became disciple of Bhadrabahu during later part of his life.[45]

Ashoka (273–232 BCE), the grandson of Chandragupta was inspired by Buddhist ideologies. There is a reference to Jains in the eddicts of Ashoka where the duties of dhammamahatma (law-authorities) are dealt with.[46] The inscription reads:[46]

Ashoka's grandson Samprati (c. 224–215 BCE), is said to have converted into Jainism by a Jain monk named Suhasti according to the tradition. He lived in a place called Ujjain.[47] It is believed that he erected many Jain temples, and the temples whose origins are forgotten were often ascribed to him in later times.[48]

Emperor Kharavela of Mahameghavahana dynasty, though religiously tolerant, is said to have patronized Jainism. Inscriptions found in Udayagiri mentions that he erected a statue of the Adinath, the first tirthankara and made cave-dwellings for monks.[49]

According to a story, Gardabhilla (c. 1st century BCE), a powerful king of Ujjain, abducted a nun called Sarasvati who was the sister of a Jain monk named Kalaka. The enraged monk sought the help of the Indo-Scythian ruler Saka Sahi who defeated Gardabhilla and made him a captive. Sarasvati was repatriated, although Gardabhilla himself was forgiven.[50] Vikramaditya, the son of Garadabhilla, drove away the saka ruler and is considered by Jains as a patron of their religion.[50] He was a pupil of a famous Jain monk called Siddhasena Divakara. The rule of Vikramaditya was ended by Gautamiputra Satakarni (also known as Salivahana) according to the tradition. He was also a great patron of Jainism.[51] Mathura was an important Jain centre during the 2nd century BCE to the 5th century CE and inscriptions from the 1st and 2nd century CE shows that the schism of Digambara/Svetambara had already happened.[52]

Vallabhi council was formed at 454 CE[53] to write the scriptures of Jainism. The digambara sect completely rejects these scriptures as not being authentic. King Vanaraja (c. 720–780 CE) of cavada dynasty was raised by a Jain monk Silunga Suri. Mularaja, the founder of Chalukaya dynasty constructed built a Jain temple, even though he was not a Jain.[54] During the reign of Bhima (1022–1064), a Jain layman Vimala built many temples above mount Abu. A famous Jain monk Hemacandra (Born c. 1088 CE) was initiated at the age of eight by monk Devacandra. He was a prime figure; responsible for propagation of Jainism in Gujarat.[55] He converted king Kumarpal of the Solanki dynasty. However, Ajaypala, nephew and successor of Kumarpala was a Saivite. He subjucated Jains.

Mihirakula ended the Gupta kingdom c. 480 CE. He was considered as an opponent by the Jains because he created policies to subjucate Jainism.[56]

Huien Tsang, a traveller, (629–645 CE) notes that numerous Jains in Vaisali near Rajagraha, Nalanda, Pundravardhana. He considers Kalinga to be major seat of Jainism during his time.[49]

The king of kannauj Ama (c. 8th century CE) was converted to Jainism by Bappabhatti, a disciple of Siddhasena Divakara.[56] Bappabhatti also converted a friend of Ama, named Vakpati. Vakpati is the one who composed the famous prakrit epic named Gaudavaho.[57]

Around the 8th century CE, Hindu philosophers Kumārila Bhaṭṭa and Ādi Śaṅkarācārya tried to restore the Vedic religion. Kumārila was a restorer of vedic sacrifices. Śaṅkarācārya brought forward the doctrine of Advaita. The Vaishnavism and Shaivism also began to rise. This was particularly in the southern Indian states.[58]

According to a Saivite legend, the Pandya king Koon Pandiyan ordered a massacre of 8,000 Jain monks. This event is depicted graphically in walls of Tivatur in North Arcot.[60] However, this legend is not found in any Jain text, is believed to be a fabrication made up by the Saivites to prove their dominance.[61][62]

During the 11th century, Basava, a minister to the jaina king Bijjala, succeeded in converting numerous Jains to the Lingayata, a Shaivite sect hostile to Jains. They destroyed various temples belonging to Jains and adapted them to their use.[59] A saint named Ekdanta Ramaya further propagated Lingayatism. He convinced Bijjala to grant a land near Abdlur for a temple of Shiva.[63] Lingayatism gradually expanded. It was the state religion of Telugu and Kannada speaking territories like Wodeyar of Mysore and Ummatur (1399–1610), Nayaks of Keladi (1550–1763).[63] They were hostile to Jains. In 1683, they stamped linga symbol in the main basati of Jains in Halebid. Jains were forced to perform Shiva rites.[64]

Hoysala king Viśnuvardhana (c. 1108–1152 CE) converted from Jainism and became a follower of Ramanuja. It is said that he ordered the Jains to be thrown in an oil mill and crushed if they did not convert.[59]

The Muslims who conquered India, like Mahmud Ghazni (1001) and Mohammad Ghori (1175), further oppressed the jaina community.[65]

The temple of Dharmanatha, 15th tirthankara was built by Setha Hatthisimha in Ahemdabad in 1848. Even during the British rule in India, the numerical strength of Jains was declining.[66] Jain laymen were converting to Hinduism. Even those who were not, Hindu rites and worship of Hindu gods were being adopted by Jains.[67] The Jain monastic community saw the dangers and made Efforts of revival. Vijayananda Suri (1837–1897) and Vijay Dharma Suri (1868–1922) of Svetambara Tapa Gachchha are known for propagation of Jainism during British Rule.[67]