History of the International Phonetic Alphabet

The International Phonetic Alphabet was created soon after the International Phonetic Association was established in the late 19th century. It was intended as an international system of phonetic transcription for oral languages, originally for pedagogical purposes. The association was established in Paris in 1886 by French and British language teachers led by Paul Passy. The first published alphabet appears in Passy (1888). The association based their alphabet upon the Romic alphabet of Henry Sweet (1880 or 1881–1971), which in turn was based on the Phonotypic Alphabet of Isaac Pitman and Palæotype of Alexander John Ellis [1]

The extIPA for speech disorders was created in 1991 and revised in 1997.

Originally the symbols had different phonetic values from language to language. For example, ⟨c⟩ transcribed both English and French ch. However, over time it was decided to restrict each symbol to a single pronunciation. In 1887, the first draft of this standardized alphabet, adequate for English, French, and German, was published, as follows:

Note: this early version of the IPA was presented as a list (with examples from European languages) instead of the articulatory charts used today.

The earliest set of diacritics to the IPA were described as follows:

By September 1888, a set of six policy statements had been formulated by the International Phonetic Association which would govern all future development of the alphabet. They were:

Aside from these six guidelines, the association encouraged phonemic-style transcription and for contributors to transcribe their own style of speaking their own language.

Several of the new letters were created by turning ordinary Roman sorts upside-down when typesetting: ⟨ʎ ɥ ə ɔ⟩. (More would be added later.) This was a convenient way to create new symbols without having to cast special IPA type, an expensive proposition for small printers.[2]

450px
450px
1905 chart (split for image quality). The "bronchials" were pharyngeals.[3]
File:IPA chart (1912).png
The IPA chart published in the 1912 edition of The principles of the International Phonetic Association. A couple labialized consonants and a tap have been added, the pharyngeals and ⟨ɒ⟩ have been dropped, and the chart has been reversed to its modern orientation.

During the 1890s, the alphabet was expanded to cover sounds of Arabic and other non-European languages which did not easily fit the Latin alphabet. These additions were published together in 1900, along with a few revisions, such as ⟨ɲ⟩ and ⟨ŋ⟩ for ⟨ɴ⟩, and ⟨ʃ⟩ for ⟨c⟩, which was reassigned. For the first time the glyphs were organized into a chart according to their articulation. Vowels and consonants were placed in a single chart, reflecting how sounds ranged in openness from stops (top) to open vowels (bottom).

Tense and lax vowels were distinguished with an acute vs grave accent, so English ⟨fíːt fìt⟩ feet, fit.

Retroflex consonants were written ⟨ṭ ḍ ṣ ṇ⟩ etc., as in Indology; this also applied to rhotic vowels, as in English ⟨ɑ̣⟩ ar. Arabic emphatic consonants were ⟨s̤ t̤⟩ etc. More or less rounded, raised, lowered, advanced, and retracted vowels were marked ⟨a˒ a˓ e˔ e˕ a ̘ a ̙⟩ etc.; the diacritic would not move under the letter for some time yet, and the latter two would later be coopted for advanced and retracted tongue root.

A second round of expansion, along with a few reassigned letter values, occurred in 1932. This was a major revision, used with little change for over half a century. Some of the changes were already adopted before the 1932 revision, for example ⟨ʋ, f⟩ were replaced by ⟨β, ɸ⟩ after the Copenhagen Phonetic Conference of 1925[6] which gathered many notable phoneticians of the time, including Daniel Jones of the IPA.[7] The symbol ⟨ᴚ⟩ was also replaced by ⟨χ⟩ before the 1932 revision.[8]

There were other sounds not found on the chart. Some of these had dedicated letters, but most were indicated with diacritics. These were, verbatim (but with added paragraph breaks for legibility),[9]

In the 1938 revision, the following was added:

In the 1947 revision, the following were added:

In addition, the diacritics ⟨◌̘⟩ and ⟨◌̙⟩ had been used for advanced and retracted vowels since the 1900s, but not included in IPA charts. They were now replaced by

In 1976 or 1979[which?] the format of the chart was revamped, and there was modest change in the IPA itself.

Also, the dedicated rhotic-vowel diacritic was not mentioned apart from the specific case of ⟨ɚ⟩; this may have been inadvertent, as it was listed in 1989. 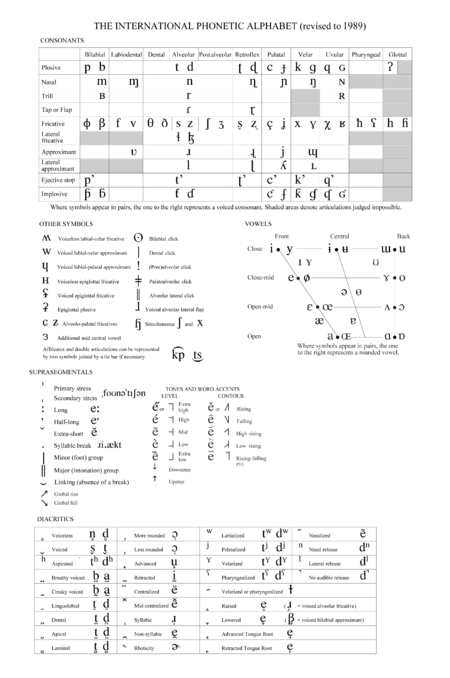 The IPA in 1989. (The arrangement of the blocks on the page may not be as published.)
Main article: IPA Kiel Convention

A primary purpose of the Kiel Convention of 1989 was to clean up the IPA. Several sounds had long been transcribed with more than one letter, contrary to the founding principles, because agreement could not be reached on which to use. The scope of the IPA was also expanded, with new letters and diacritics, and the notation of tone was completely revamped.

(diacritics) [Some of these may have been introduced earlier]

Several of these had long been used, but had not been officially included in the IPA until now. 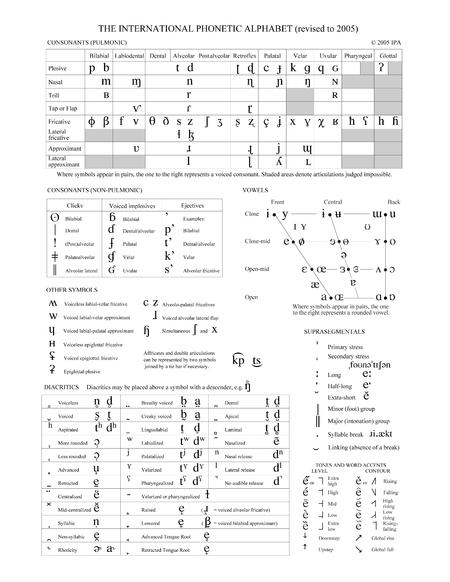 In 2005, a single change was made: the right hook v symbol ⟨ⱱ⟩ was added for the labiodental flap.[14]

A revised version was published in 2015. No symbols were added or withdrawn, but the appearance/glyphs of a few symbols has very slightly changed.[15]