Home-ownership in the United States 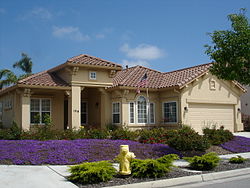 A single-family home valued at roughly $550,000 in Salinas, California.

The home-ownership rate in the United States[1][2] in 2009 remained similar to that in some other post-industrial nations[3] with 67.4% of all occupied housing units being occupied by the unit's owner. Home ownership rates vary depending on demographic characteristics of households such as ethnicity, race, type of household as well as location and type of settlement. In 2014, homeownership dropped to a lower rate than it was in 1994, with a rate of 64%.[4]

Since 1960, the homeownership rate in the United States has remained relatively stable having increased 5.6% since 1960 when 62.1% of American households owned their own home. However, homeowner equity has fallen steadily since World War II and is now less than 50% of the value of homes on average.[5] Homeownership was most common in rural areas and suburbs with three quarters of suburban households being homeowners. Among the country's regions the Midwestern states had the highest homeownership rate with the Western states having the lowest.[2] Recent research has examined the decline in homeownership rates among households with "heads" aged 25 to 44 years, which fell substantially between 1980 and 2000 and recovered only partially during the 2001-05 housing boom. This research indicates that a trend toward marrying later and the increase in household earnings risk that occurred after 1980 account for a large share of the decline in young homeownership.[6]

Homeowners in the United States also tend to have higher incomes and households residing in their own home were more likely to be families (as opposed to individuals) than were their tenant counterparts.[7] Among racial demographics, European Americans had the country's highest homeownership rate, while those identifying as being African American had the lowest homeownership rate. One study shows that homeownership rates appear correlated with higher school attainment.[8]

The name "homeownership rate" can be misleading. As defined by the US Census Bureau, it is the percentage of homes that are occupied by the owner. It is not the percentage of adults that own their own home. This latter percentage will be significantly lower than the homeownership rate because many households that are owner-occupied contain adult relatives (often young adults, descendents of the owner) who do not own their own home, and because single building multi-bedroom rental units can contain more than one adult, all of whom do not own a home.

Homeownership has been promoted as government policy using several means involving mortgage debt and the government sponsored entities Freddie Mac, Fannie Mae, and the Federal Home Loan Banks, which fund or guarantee $6.5 trillion of assets with the purpose of directly or indirectly promoting homeownership. Homeownership has been further promoted through tax policy which allows a tax deduction for mortgage interest payments on a primary residence. The Community Reinvestment Act also encourages homeownership for low-income earners. The promotion of homeownership by the government through encouraging mortgage borrowing and lending has given rise to debates regarding government policies and the subprime mortgage crisis.

Hispanics had the lowest homeownership rate in the country in all years, except for 2002, up until 2005. For the last half of the decade of the 2000s the homeownership rate for Hispanics exceeded that of African Americans. Temporal fluctuations were slight for all races, with rates commonly not changing more than two percentage points per year.[9] 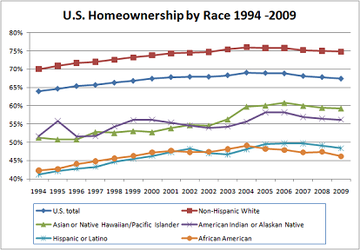 The increase among white Americans was less substantial. In 2005, 75.8% of white Americans owned their own homes, compared to 70% in 1993, and the rate fell during the last half of the decade of the 2000s, slightly more slowly than for the rest of the population. Thus one can conclude that despite a large remaining discrepancy between the homeownership rates among different racial groups, the gap had been closing up until the peak, with ownership rates increasing more substantially for minorities than for whites, but subsequently began slightly widening.[9]

There is a strong correlation between the type and age of a household's family structure and homeownership.[10] As of 2006, married couple families, which also have the highest median income of any household type, were most likely to own a home. Age played a significant role as well with homeownership increasing with the age of the householder until age 65, when a slight decrease becomes visible. While only 43% of households with a householder under the age of thirty-five owned a home, 81.6% of those with a householder between the ages of 55 and 64 did.[10]

File:Housing and Income.png
Housing characteristics according to income in 2002.
Main article: Income in the United States

There are considerable correlations between income, homeownership rate and housing characteristics. As income is closely linked to social status, sociologist Leonard Beeghley has made the hypothesis that "the lower the social class, then the fewer amenities built into housing." According to 2002, US Census Bureau data housing characteristics vary considerably with income. For homeowners with middle-range household incomes, ranging from $40,000 to $60,000, the median home value was $112,000, while the median size was 1,700 square feet (160 m2) and the median year of construction was 1970. A slight majority, 54% of homes occupied by owners in this group had two or more bathrooms.[11]

Among homeowners with household incomes in the top 10%, those earning more than $120,000 a year, home values were considerably higher while houses were larger and newer. The median value for homes in this demographic was $256,000 while median square footage was 2,500 and the median year of construction was 1977. The vast majority, 80%, had two or more bathrooms. Overall, houses of those with higher incomes were larger, newer, more expensive with more amenities.[11]